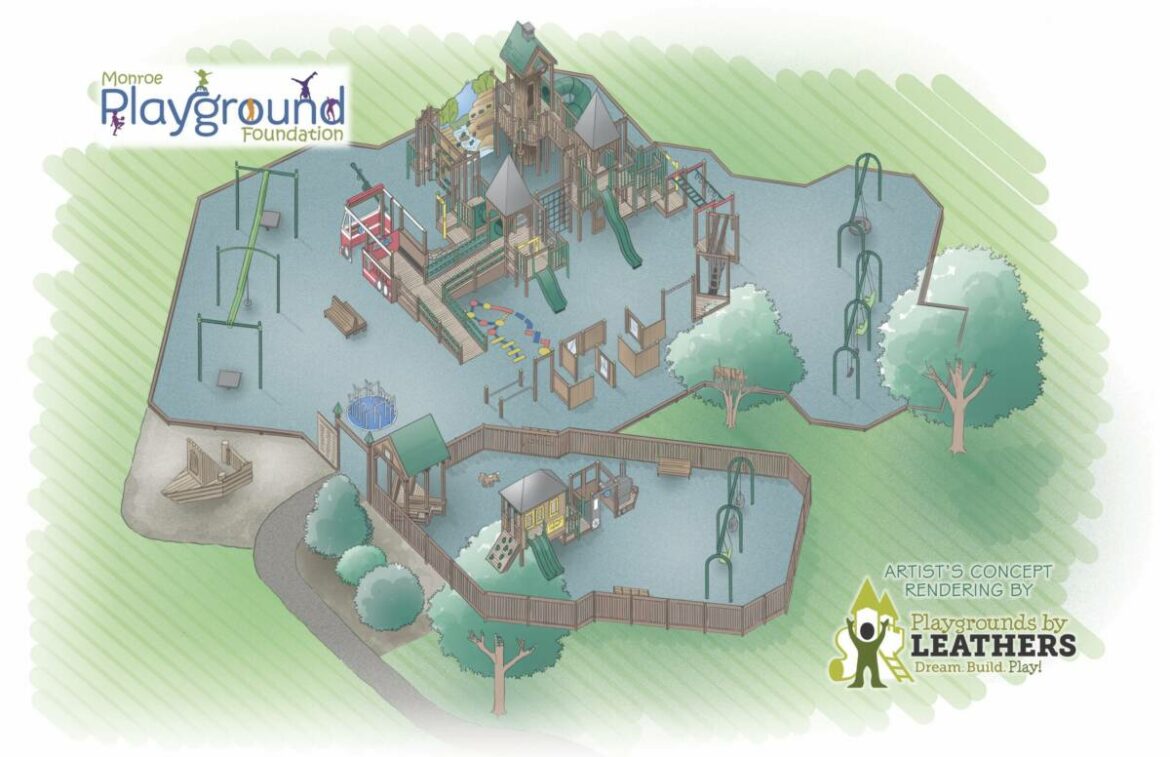 MONROE, CT — Dan Keene remembers the pride he felt bringing his two children to a playground in Montgomery, Penn., where he grew up. A picket in the fence had his family’s names on it, in recognition of their part in a community build long ago. Keene also took them to a periscope-pirate ship their grandfather built with other volunteers.

“It was proof that the mark you make investing today will pay dividends for 30-40 years when you take your grandchildren to the playground and say, ‘I helped build this,'” Keene said.

On May 10, two thousand volunteers will have the opportunity to be part of the community build of The Wolfe’s Den playground at Wolfe Park in Monroe. Keene, who is chairman of the Monroe Playground Foundation, announced the build date during an interview with The Sun at Last Drop Coffee Shop one recent Saturday morning.

Keene said 900 people are registered to be part of the community build, so far. To signup, visit the Monroe Playground Foundation website and click on “Volunteer.”

“You don’t need to be an adult skilled with tools to help build,” said Mike Ganino, vice chairman of the MPF. “My kids are helping.”

Keene said the community build will be performed over a period of six days.

“We’ll have babysitting available and have food for everybody,” he said. “It’s going to be a weeklong party in Monroe and it’s going to be fun — and everybody will be able to say, ‘I helped build that.'”

The MPF has held fundraisers for The Wolfe’s Den, which will replace the wooden Kids’ Kreation playground, for about four years in an effort to raise the $400,000 needed for the new project.

Keene said the foundation is currently at 65 percent of its goal, but they are talking to potential donors who he believes can “move the needle.”

“We have a good fundraising plan and a great team that’s committed to getting this done,” he said. “But we still need the town’s help, buying pickets and sponsoring playground components,” he added. 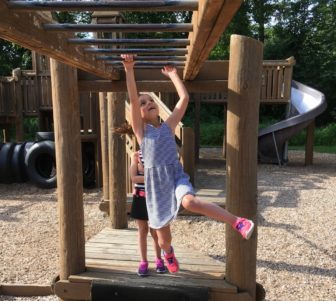 Juliana, 5, swings her way across the monkey bars on the Kids’ Kreation playground at Wolfe Park.

In 1992, 2,000 volunteers had a community build for the Kids’ Kreation playground at Wolfe Park. It was designed by Leathers & Associations, a company that creates custom-designed playgrounds, “imagined by children and built by community.”

A time capsule was buried on the site, which will be dug up at the start of the build for The Wolfe’s Den.

Keene said there is still a sentimental feeling for the wooden playground.

“What I loved about the wooden playground, it doesn’t tell kids how to play with it,” he said. “‘Here’s a maze you can run through. Here’s a boat where you can be a captain.’ We have a unique thing at the park. But it’s not in good shape.”

The MPF gained its nonprofit status in June of 2018 and Leathers & Associations was hired.

“We had a design day on November 27, 2018,” Keene said. “A designer went to each elementary school in Monroe to solicit ideas from the children. Every grade level came through and talked to the designer.”

Not only did local children have direct input into the playground’s design, but a townwide contest was held with voting on the name. Val Saltzman, a parent, came up with The Wolfe’s Den.

Early on, the Monroe Playground Foundation held Friday Family Suppers at Monroe Congregational Church to raise money for the project before the COVID-19 quarantine slowed things to a stop, Ganino recalled.

But when things opened up again, the MPF held an ice cream social and virtual bingo and the community responded in a big way. Another fundraising event included drive-thru pictures with Santa.

The foundation is planning a breakfast with Santa at Masuk High School on Dec. 11 for children and families, and Fire and Ice, a night of dinner and dancing for adults.

“That’s our approach, to bring people together,” Ganino said of the fundraising. “We have events geared towards kids, families and adults.”

Residents have also done fundraising on their own. Local businesses have made donations, private donations were made, children had lemonade stands and Monroe’s public schools have also stepped up.

For example, at Fawn Hollow Elementary School, students in Amanda Friedlander’s first grade class accepted $531 worth of donations and awarded a quilt they made.

A Girl Scout Troop donated $500, according to Ganino.

Keene said they are also grateful to town officials like Parks and Recreation Director Missy Orosz and First Selectman Ken Kellogg, who included $100,000 in the town budget for the playground. 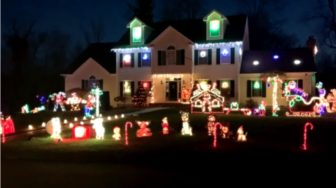 The Sebben family won the People’s Choice Award for the holiday display at their home at 36 Admiral Drive.

Fundraising efforts for the playground also established new traditions that will live on, including Light Up Monroe!

Light Up Monroe was a friendly contest among residents who decorated their homes with Christmas lights and other holiday decorations. A panel of judges recorded the entries with pictures on their cellphones, where they posted scores in different categories on an app.

Townspeople, and residents from outside Monroe’s borders, enjoyed taking the family out for a drive to see the spectacular displays.

“That was an event that fit in particularly well with what our families wanted to do,” Ganino said. “They wanted to get out of the house and didn’t want leave their car.”

Keene, an executive with the WWE, used his TV experience to make the video production of “The Monroe Holiday Spectacular” a special hosted by Snowy the Snowman to announce the winners.

The contest is here to stay. The Monroe Playground Foundation is already looking forward to the second annual Light Up Monroe. 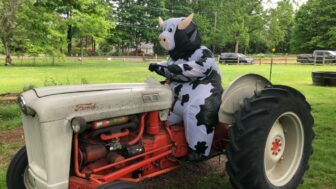 Ploppy the Cow was the promoter of Cow Plop Bingo at Guardians Farm in Southbury.

There were also other fun events, like Cow Plop Bingo last June. Ploppy the Cow’s friends, cows Seneca, Penelope and Tiffany, did their business on a field at Guardians Farm in Southbury.

The field had Bingo squares, which game participants bought with donations before the event.

“There’s mixed emotions with taking down the old playground,” Ganino said. “It’s sad to see it go, but what’s coming will be wonderful for the community.”

“It wasn’t as inclusive as it would be if it was built today,” Ganino said of Kids’ Kreation. “It’s a different world.”

He said The Wolfe’s Den will allow children in wheelchairs, on crutches and on the spectrum to play side-by-side with the other kids.

It will include an accessible maze and a sensory obstacle course — with ramps throughout, according to Keene. “We want side-by-side play for all the kids in Monroe,” he said. 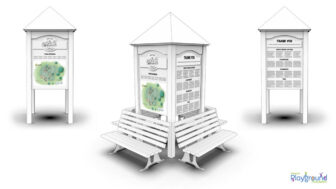 Memorial benches will honor the names of The Wolfe’s Den playground volunteers for generations to come.

The building of The Wolfe’s Den playground will honor Kids’ Kreation.

A committee will also plan a time capsule, names of volunteers will be memorialized for generations to come (this time with memorial benches), and a number of residents involved in the last community build have a role in the new project, including Frank Bent, who is a board member.

“I wanted something that would preserve that feeling and be the best thing for Monroe,” Keene said of the last playground. “We wanted to recapture the spirit of 1992.”

Ganino said, “after four years, it’s exciting to announce that a playground is going to be built.”

For information, or to make a donation, visit The Monroe Playground Foundation website.