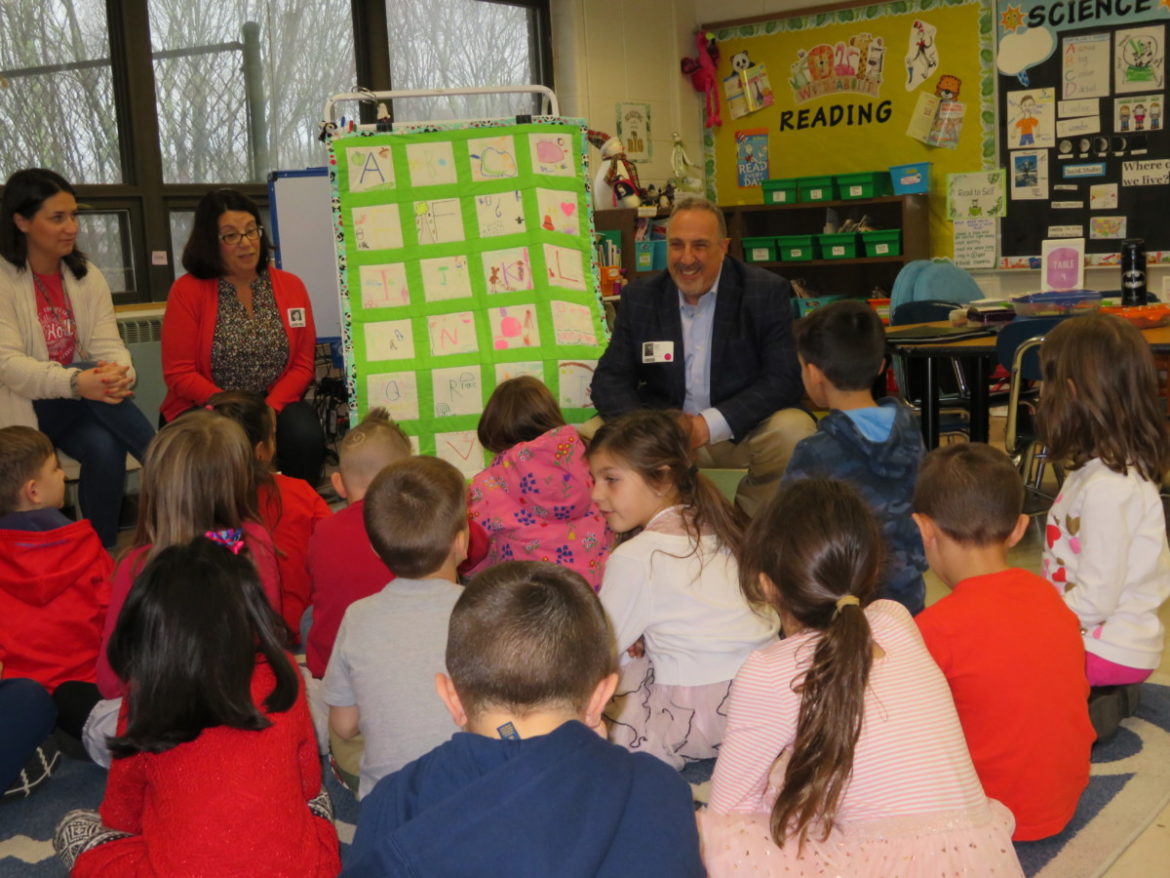 Michael Ganino, treasurer of the Monroe Playground Foundation, talks to Fawn Hollow first graders about the project for a new playground at Wolfe Park.

Fawn Hollow Elementary School students in Amanda Friedlander’s first grade class bought raffle tickets to win a quilt they made. Then the children donated all of the proceeds to the Monroe Playground Foundation for its project to replace the Kids Kreation playground at Wolfe Park.

Jennifer Cristo, secretary of the foundation, and the nonprofit’s treasurer, Michael Ganino, visited Friedlander’s class Thursday morning for a presentation of a $531 check.

Principal Rebecca Kosisko said some of the children donated their own money to the cause. “They took the money out of their piggy banks,” she said. “We try to build that spirit of generosity in our students’ everyday lives and it really happens. It’s great.” 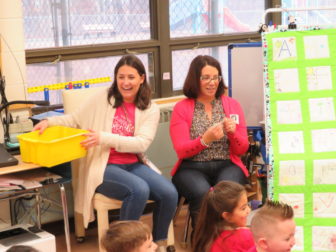 Friedlander said her grandmother, Mary Ann Santangelo, is an avid quilter, who had given her squares Friedlander could use with markers for an art project with her students. Each child designed a square for the green and white alphabet quilt.

After the children made their designs, Santangelo sewed the squares together.

“As much as I could have kept it, I wanted someone else to enjoy it,” Friedlander recalled.

She wanted a student to be able to take the quilt home as a keepsake, but how could she choose? To make it fair, the class had a raffle with the proceeds benefiting a good cause.

Friedlander wanted something positive children could relate to and feel excited about, and said Kosisko suggested the Monroe Playground Foundation as the beneficiary of the raffle.

“It’s so local and it resonates with everyone,” Friedlander said of Monroe’s need for a modern playground at Wolfe Park.

“Most kids brought in 20 dollars and I had one kid who brought $100,” she said. “I want to teach them about real life experiences, helping others and giving back.” 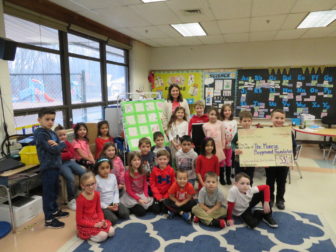 Cristo and Ganino spoke to the children, who gathered together on a carpet in front of the quilt inside their classroom. Ganino and Cristo told the class they loved the beautiful quilt and that they all did a great job on it.

“You should be very proud,” Cristo said.

Ganino talked about the project to replace the old wooden Kids Kreation playground at Wolfe Park with a safer, more modern playground that can be enjoyed by all. Children will not get splinters and there will be no bees, according to Ganino.

“I love playing on a playground,” he said.

A boy replied, “who doesn’t, really?” as laughter filled the room.

“The playground has all of your ideas,” Ganino told the children. “When you kids play on the playground, I always want you to think of this day and what you did.”

He assured the children there will be high slides to go down and monkey bars.

Friedlander smiled at her students and said, “my friends, I’m so proud of you for being excited about this and donating to a good cause.”

Vote to name the new playground

A contest to name the new playground is still underway and entries were whittled down to five names: Kids Kingdom, The Wolfe’s Den, Kindness Creations, Kidtopia and Playscape Adventure. Voting closes on March 1. To vote, click here.

The Monroe Playground Foundation is trying to raise $400,000 for the playground project, which will include a community build. The organization, which just finished a fundraising dinner series, raised around $103,000 so far.

“The dinners went great,” Ganino said. “Almost 800 people participated in over four-in-a-half months. We had five different menus. It worked, so well we’re thinking of a summer series.”

Aside from financial donations, there are opportunities to be included on the Supporters Board, to buy a personalized picket fence post and to buy equipment such as a climbing wall and a long bumpy slide. For information, visit the foundation website.