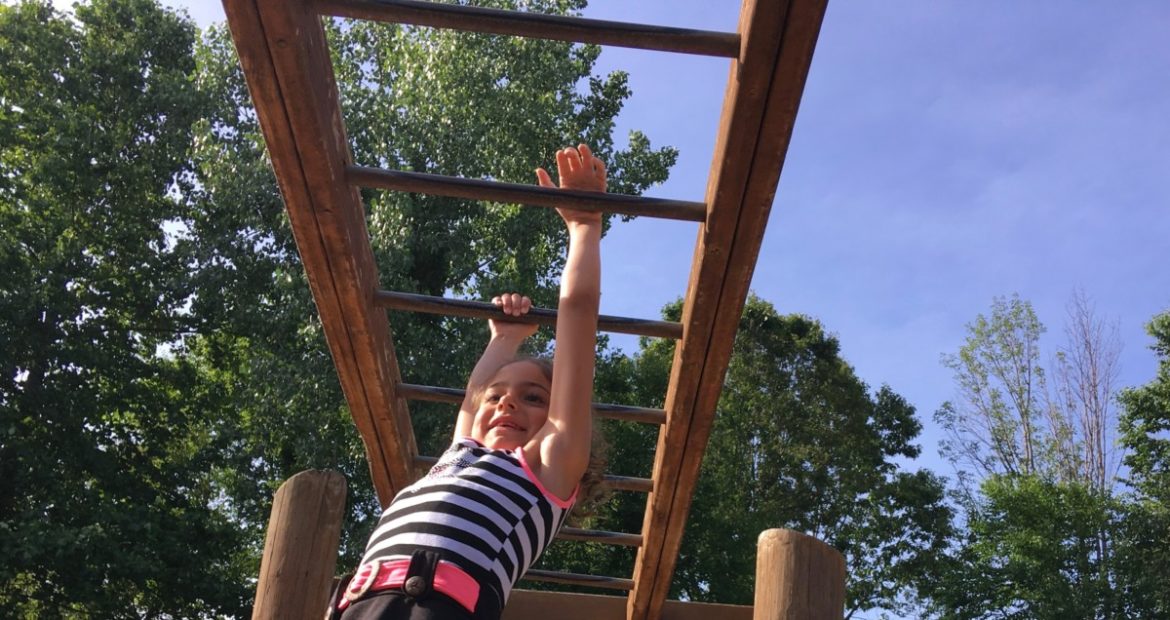 Elle, 7, reaches for the sky on the monkey bars at Kids Kreation playground at Wolfe Park one recent Friday morning. 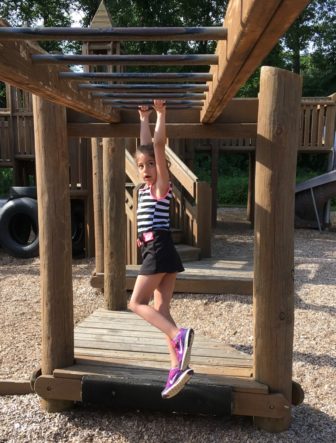 Elle, 7, makes her way across the monkey bars at Kids Kreation at Wolfe Park one recent Friday morning.

monkey bars and go down the slides at the Kids Kreation playground at Wolfe Park one recent Friday morning. A nonprofit foundation is planning a new, modern play space to replace the wooden equipment.

“It’s a wonderful place to play,” Forsander said. “It’s a wooden playground. You don’t see that anymore. We love how large and clean it is. My hope is the new playground will be just as large and unique as this park is.”

“The playground is not unsafe, but it’s not up to the standard of modern playgrounds,” said Dan Keene, chairman of the foundation’s board.

“It’s not ADA complaint,” board secretary Jennifer Cristo added of the 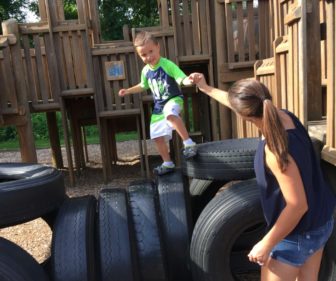 Kids Kreation was built by volunteers in the fall of 1992 in an effort led by Alice Pulliam and Nancy Pompa, according to Keene.

During an interview at the park, Keene and Cristo showed where old wooden poles used for the playground are cracking from age and explained how splintering wood could be a potential hazard.

The original playground was designed by Leathers and Associates, the same Florida firm that designed the new one. 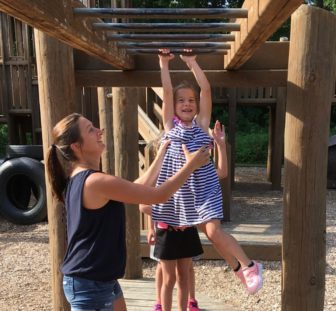 much for a new one and have lasted another 15 to 20 years,” Cristo said. “The new one will be made with recycled milk bottles.”

“They’re saying the new playground will last 50 years or more, but they haven’t been that far out,” Keene said of Leathers & Associates. “The materials are taken out of the waste stream. We’ll get the number of milk jugs used for our playground.”

The Monroe Playground Foundation recently received a big boost for its fundraising when First Selectman Ken Kellogg and the Town Council supported its application for a Connecticut Neighborhood Assistance Act Program proposal, which would allow C-corporations (in which owners and shareholders are taxed separately from the entity) to receive a tax credit for 60 percent of their donations to the project.

If the Connecticut Department of Revenue Services approves the application, the total amount of tax credits will be capped at $150,000.

Kellogg said his adult children have many fond memories from their visits to the Kids Kreation playground growing up. “It was state-of-the-art at the time, but we all realize technology has improved and there are things we wouldn’t do now,” he said. “For instance, a metal slide gets too hot in the sun. Different materials are being used that are longer lasting and safer.”

The first selectman said the town’s insurance company does periodic checks to make sure the playground is safe. Kellogg said the town wants to be partners in the foundation’s fundraising effort.

Keene and Cristo said there will be sponsorship opportunities for businesses and private citizens. “It will be a great way to be a part of something that will be visible in the community for a long time,” Keene said.

A picket fence in the Tot Lot area of the playground will have family names on each picket for those donating $100.

Residents can also purchase 8-by-8 tiles, which will be part of the fence. Foundation members said they hope to have an event where children can use paint to put their 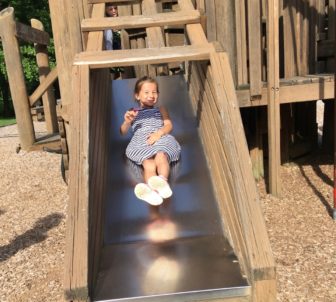 Clara, 6, slides down a slide at the Kids Kreation playground at Wolfe Park.

handprints on the tiles.

The tiles cost $30 each, but that price is reduced to $25 with purchases of four or more.

Cristo said volunteers have sold pickets and tiles at Monroe Farmers Markets on Fridays and at Character Dinners and Movie Nights at Great Hollow Park. Sponsors can also buy components for the playground, such as the climbing wall, see-saw and slide. The equipment and prices are listed on the website, monroeplaygroundfoundation.org.

Those who buy components will have their names engraved on a plaque at the playground.

The foundation is also raising donations through events. The first was A Party in the Park two years ago. Upcoming events in the planning stages include Harvest & Hops at Fireman’s Field and Cow Plop Bingo.

‘There’s a job for everyone’

Aside from donations, the Monroe Playground Foundation needs volunteers for a community build of the playground, which should take a week. “We need about 2,000 volunteers,” Cristo said, “and we need some to be professionals. We’ve already had people step up.”

But Cristo and Keene stressed the fact that residents of all ages and skill levels are welcome to volunteer.

“There’s a job for everyone,” Keene said. “I remember helping on a playground when I was a kid growing up in Upper Gwynedd, Pennsylvania. 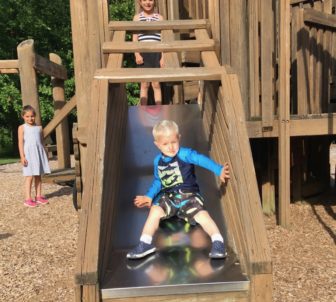 Owen, 3, takes his turn going down the slide at Kids Kreation playground at Wolfe Park.

I was in fifth grade. I remember soaping screws and watching my dad build.”

“We’re hoping the entire town will do this,” he added. “It’s about showing pride in your town.”

For information on the Monroe Playground Foundation’s upcoming events, on making a donation or becoming a volunteer visit monroeplaygroundfoundation.org. The nonprofit also has Facebook and Instagram pages. 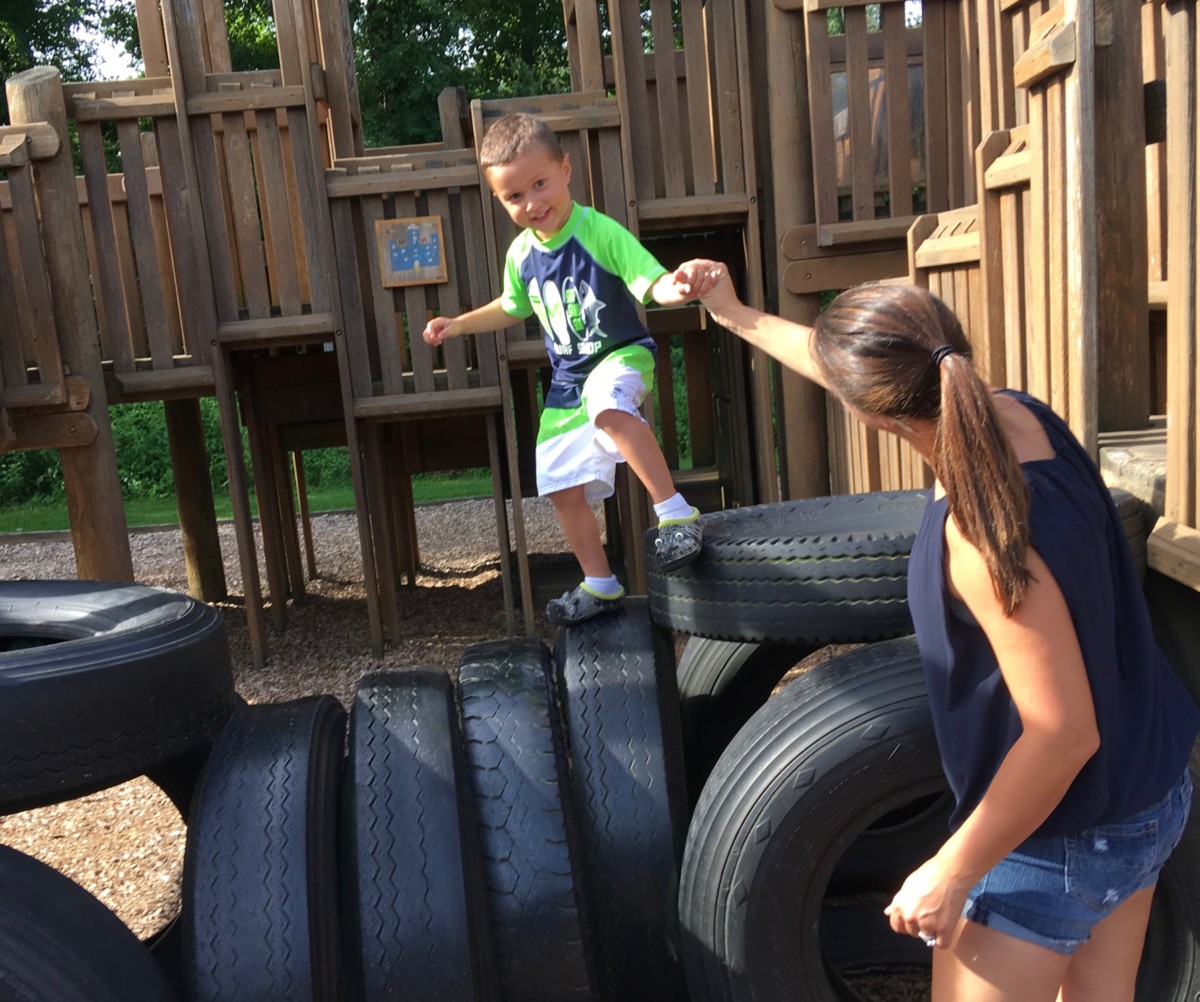 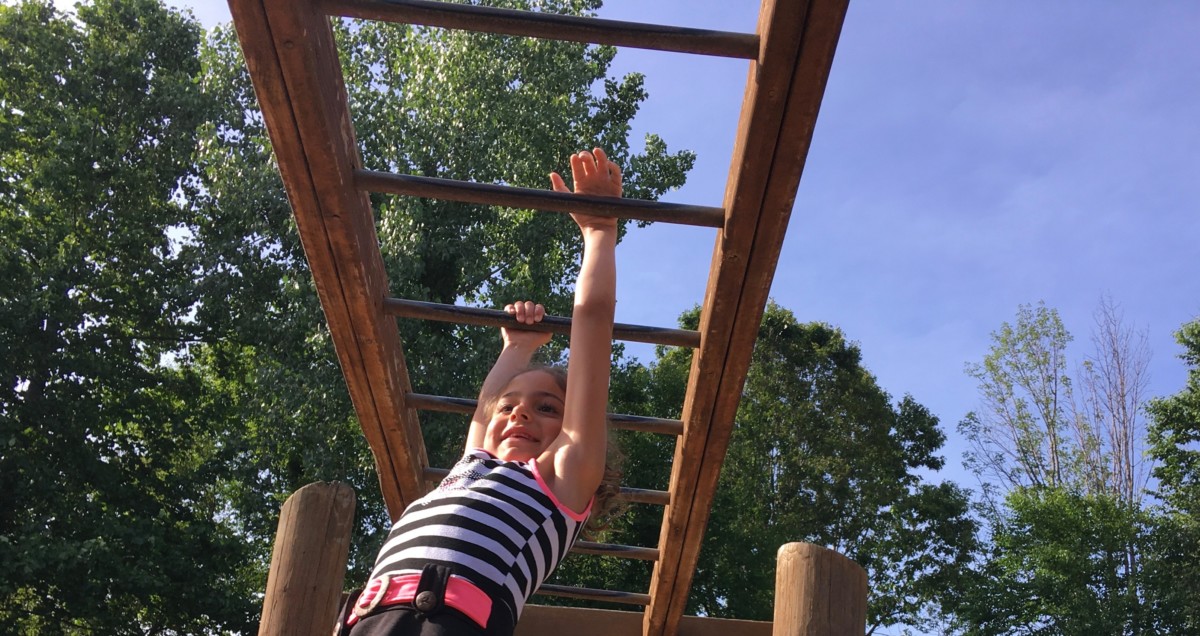 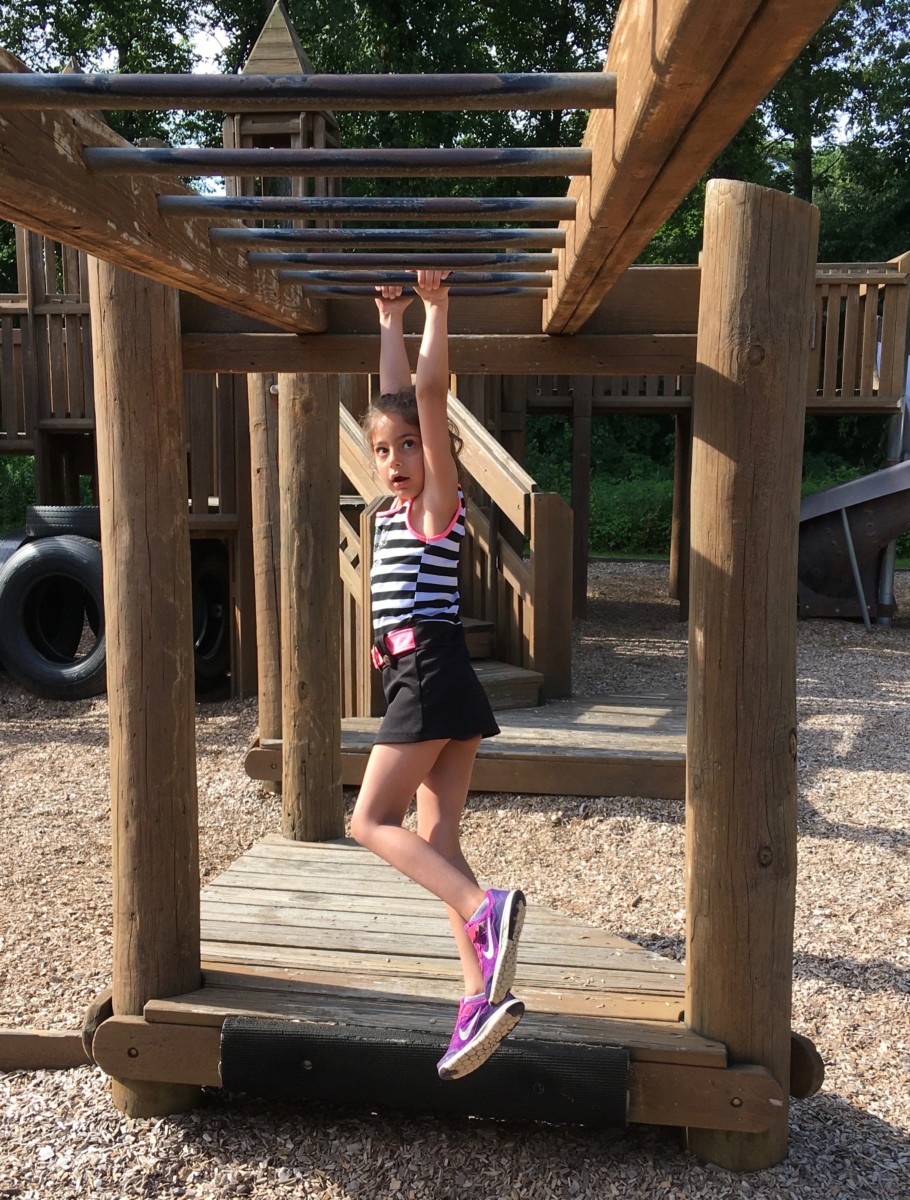 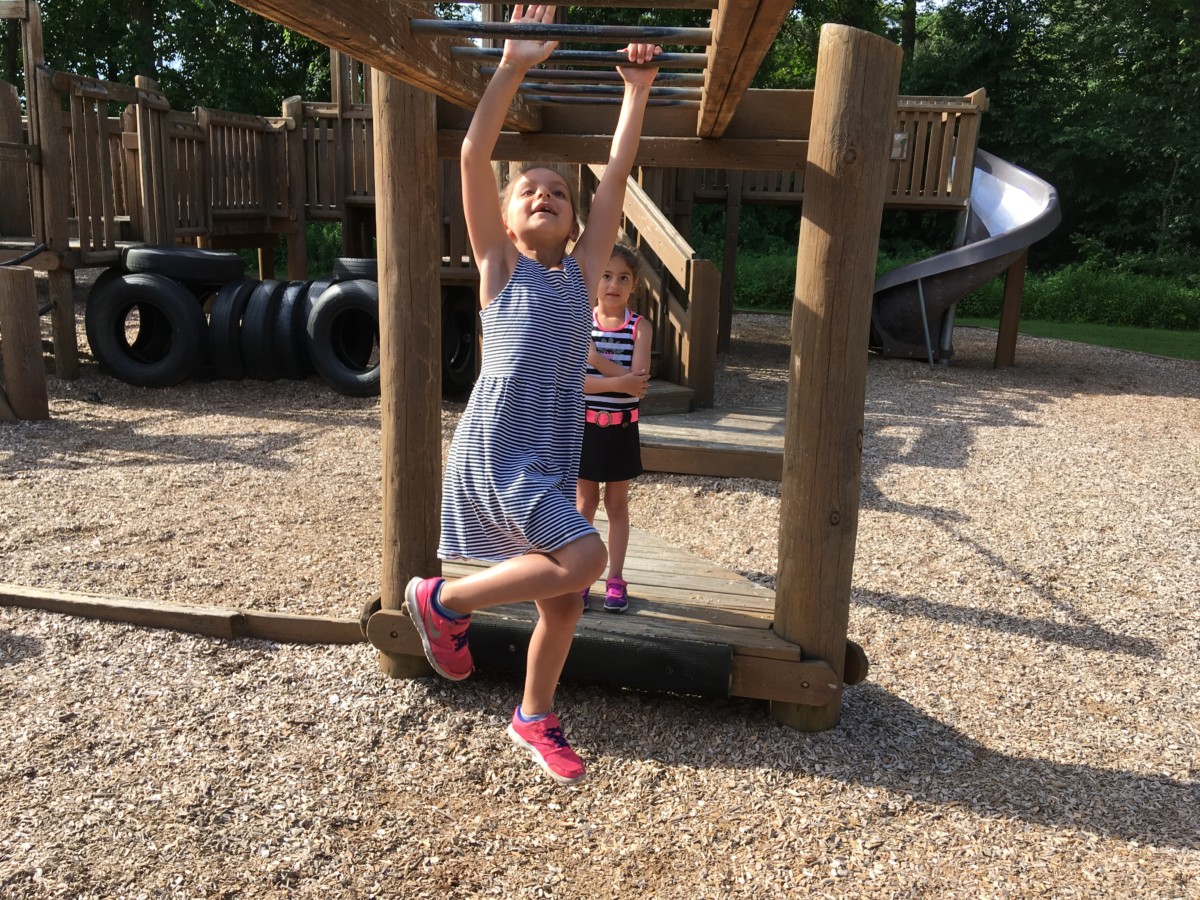 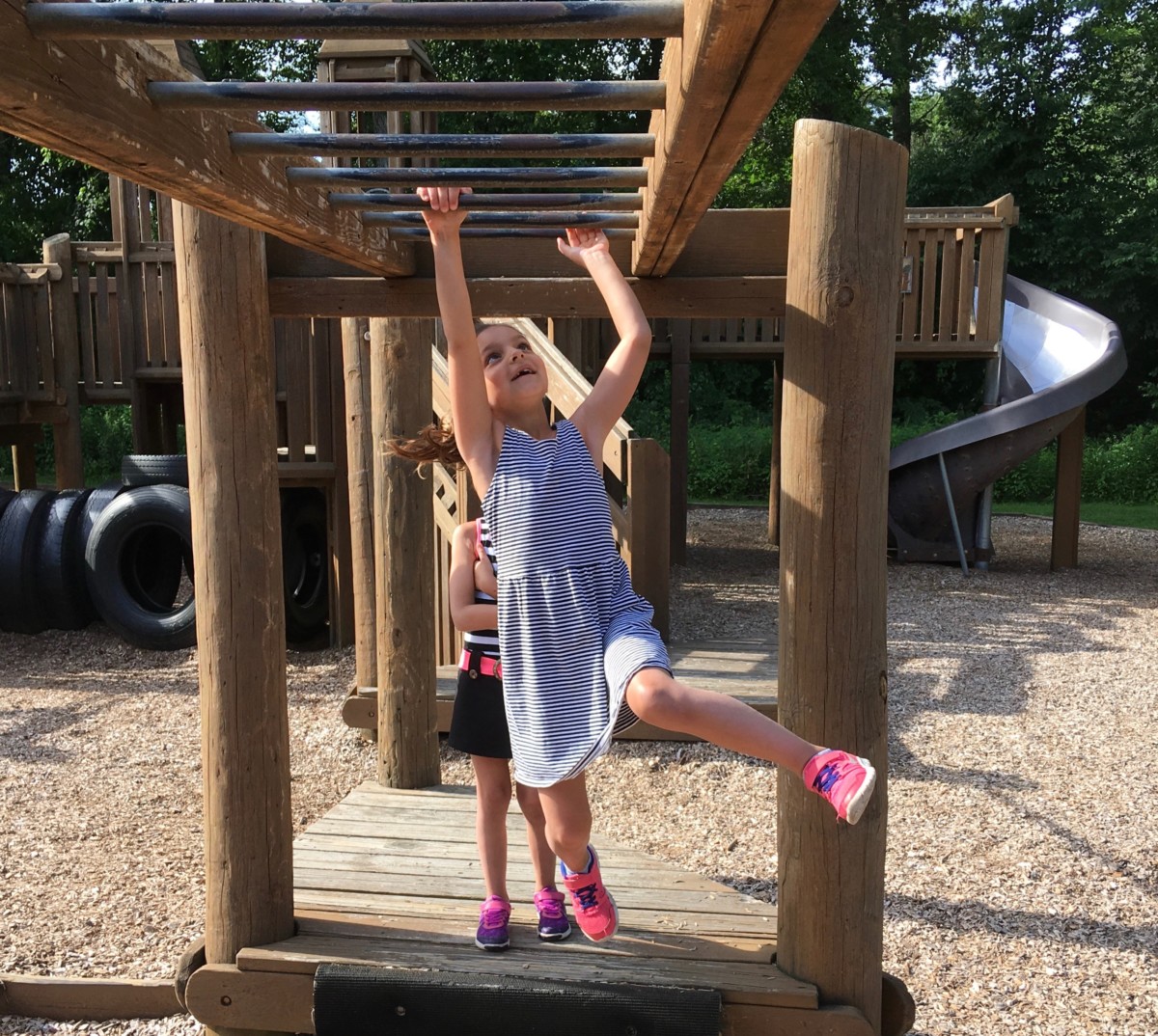 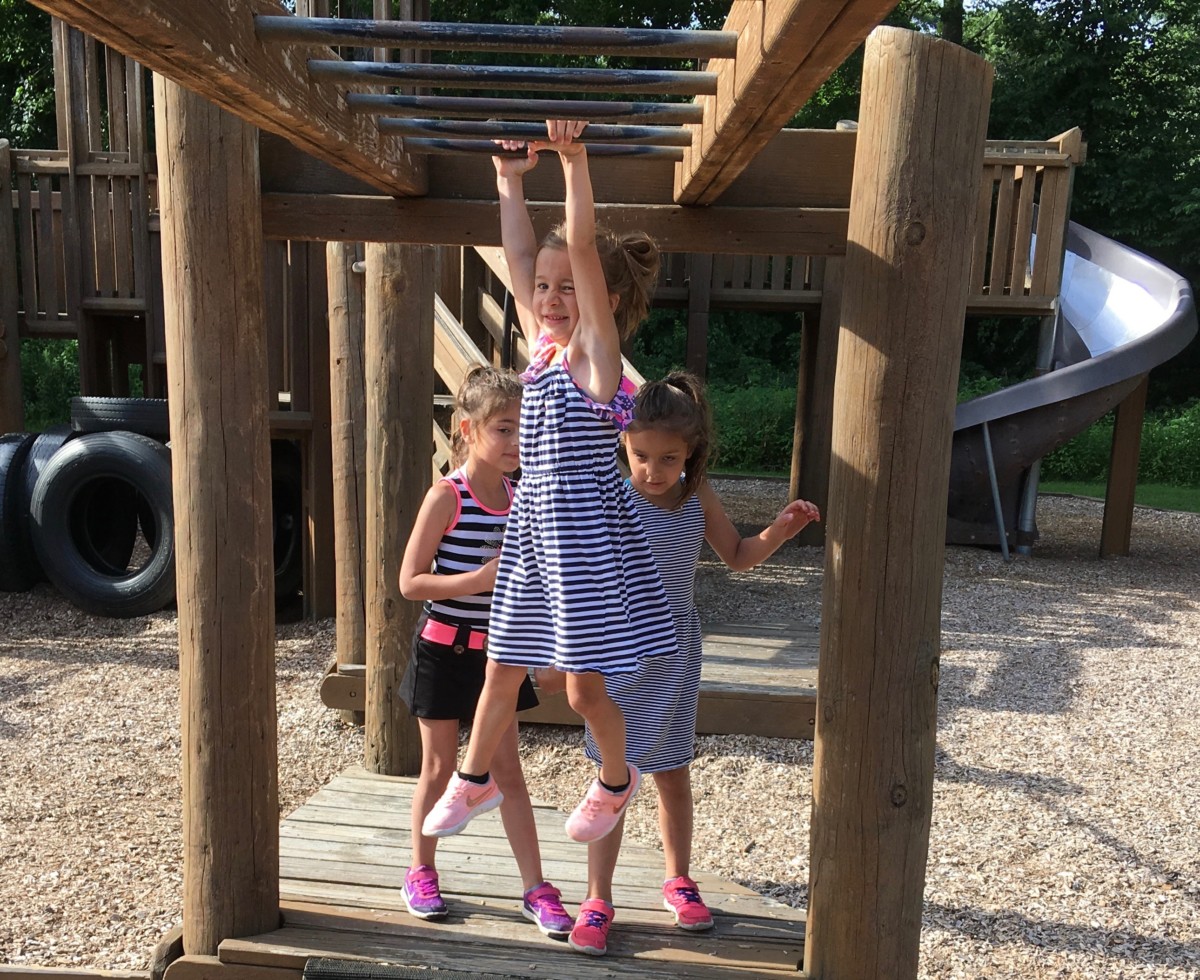 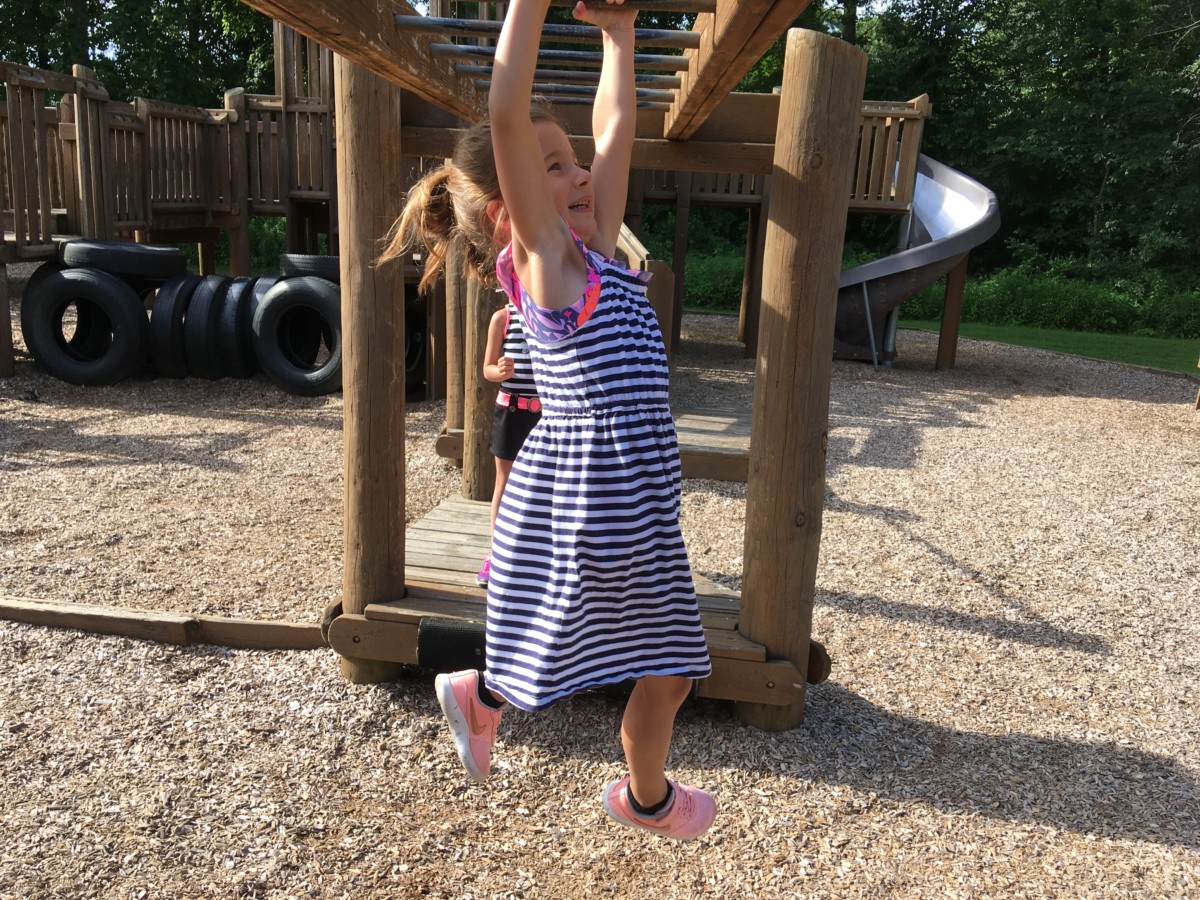 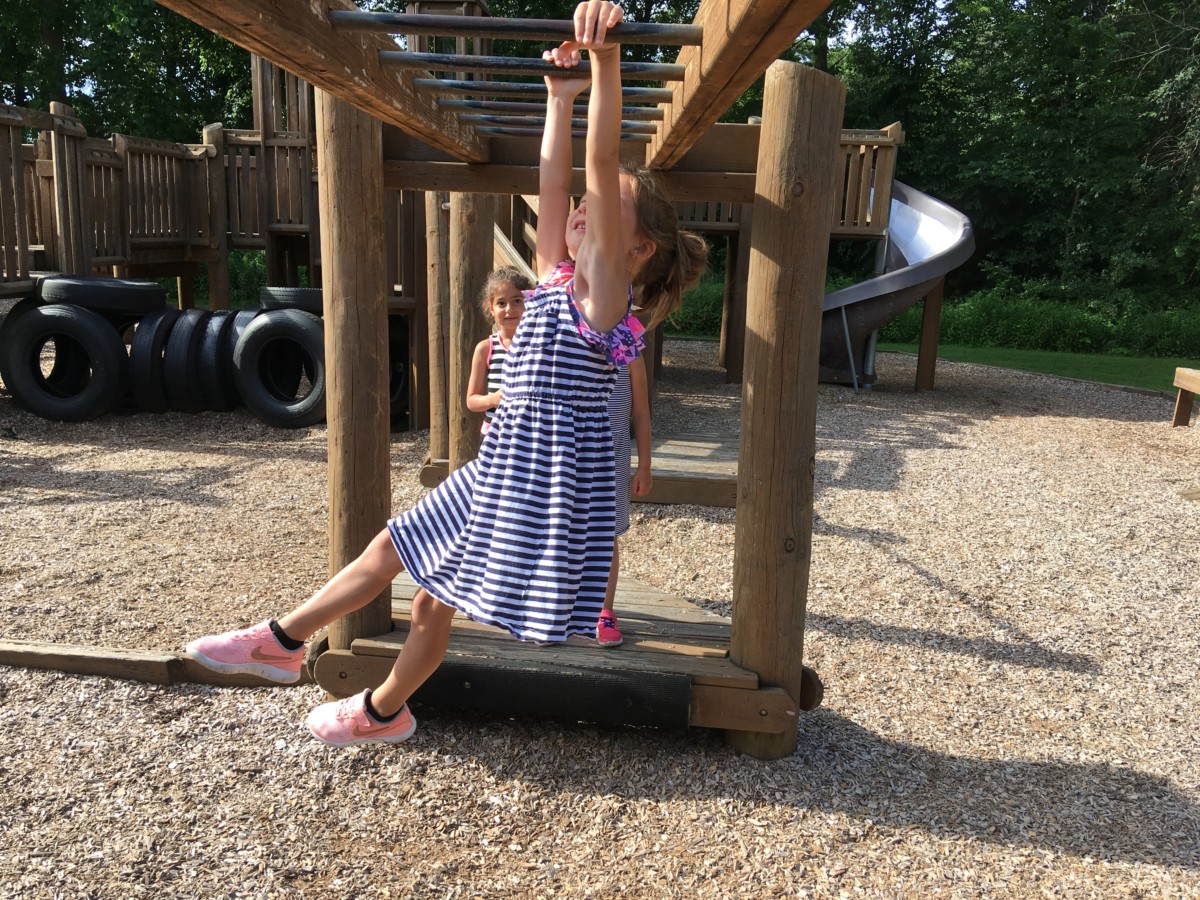 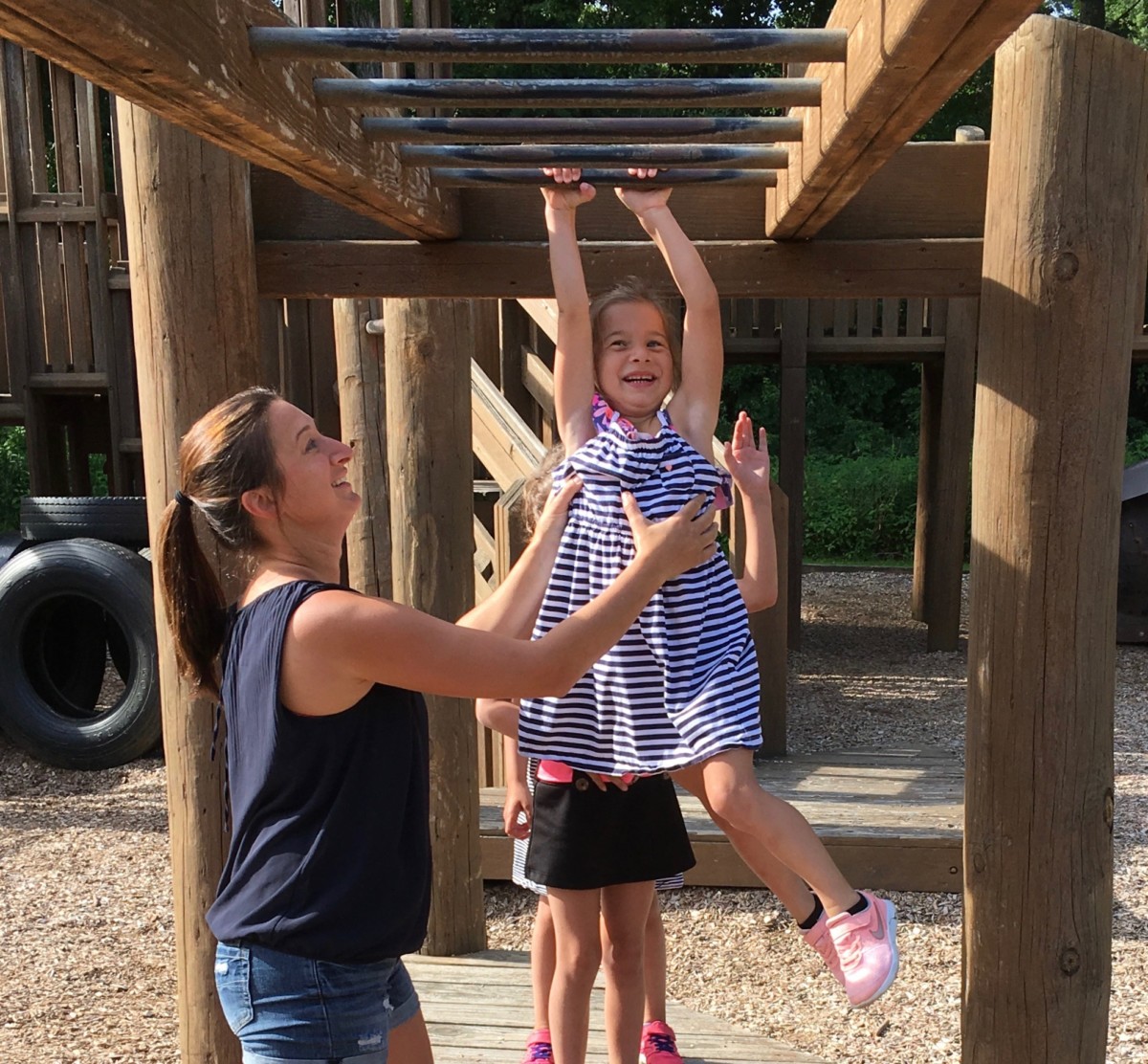 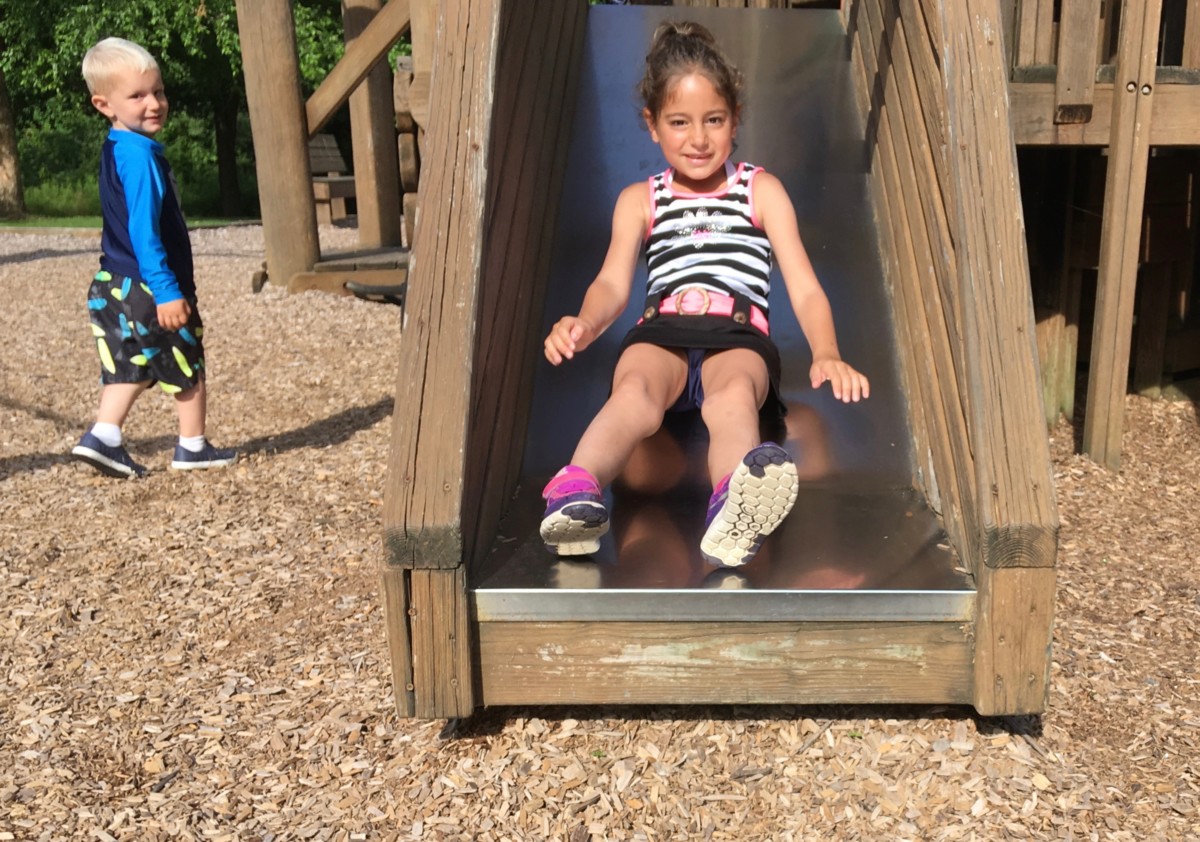 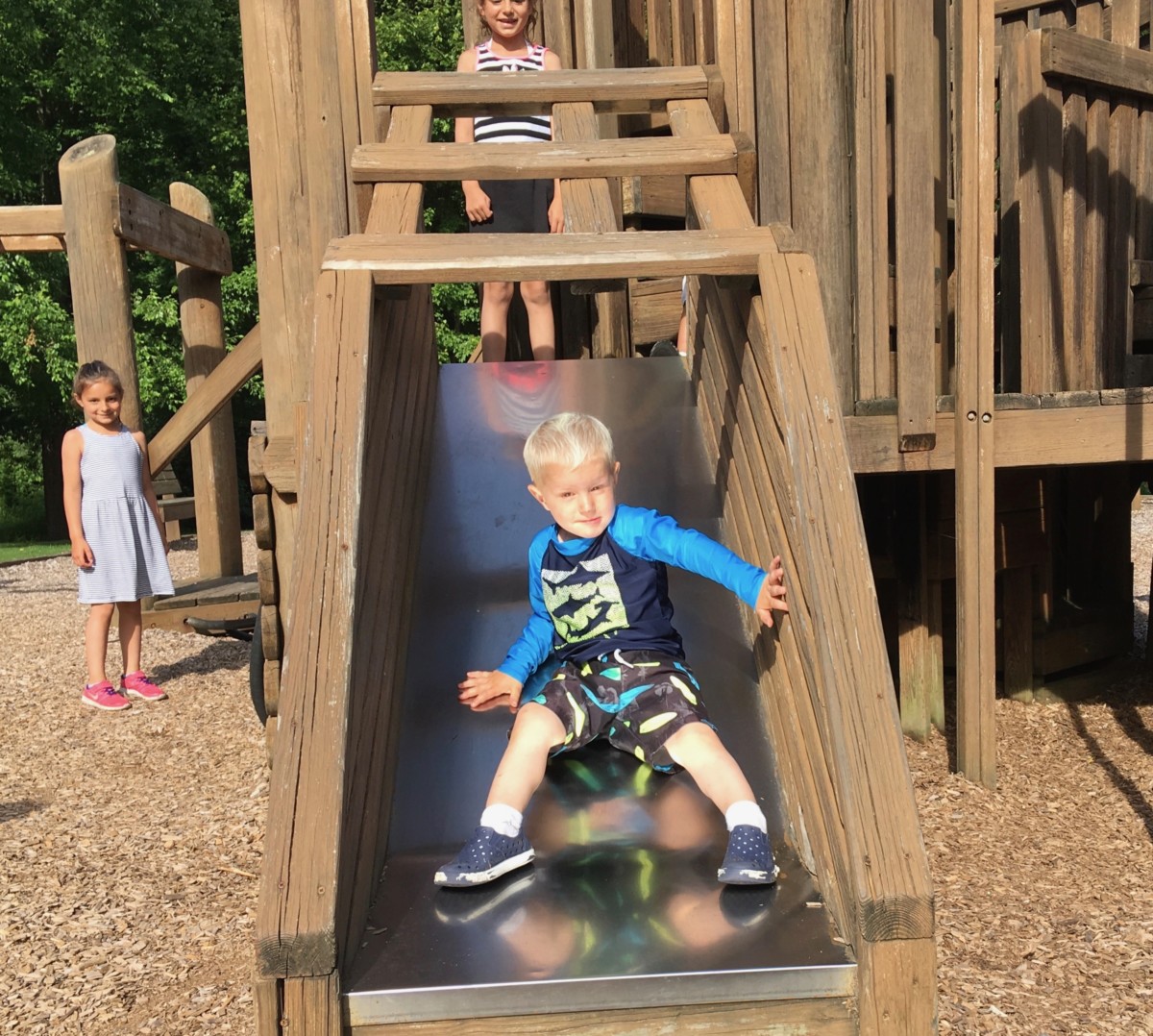 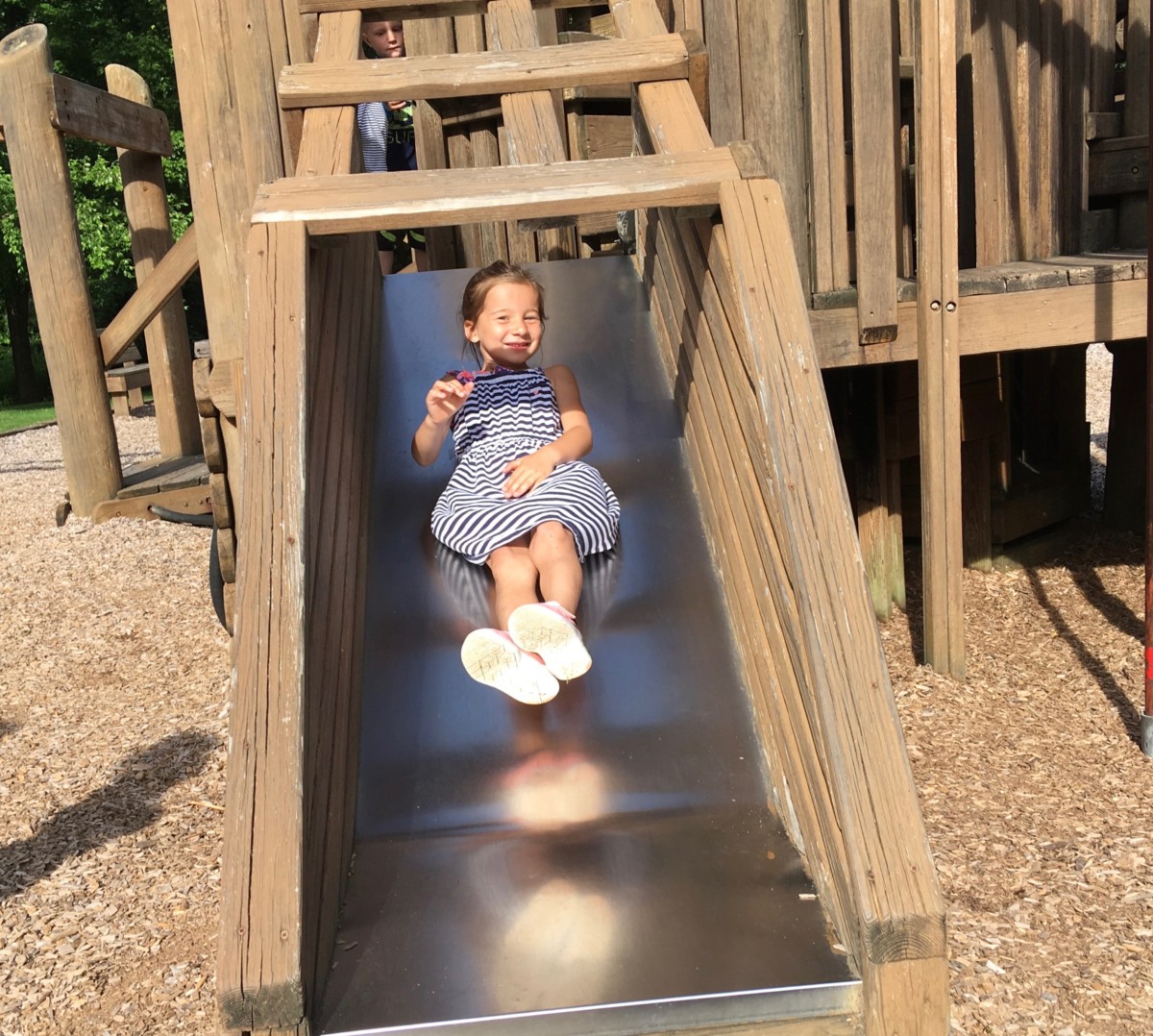