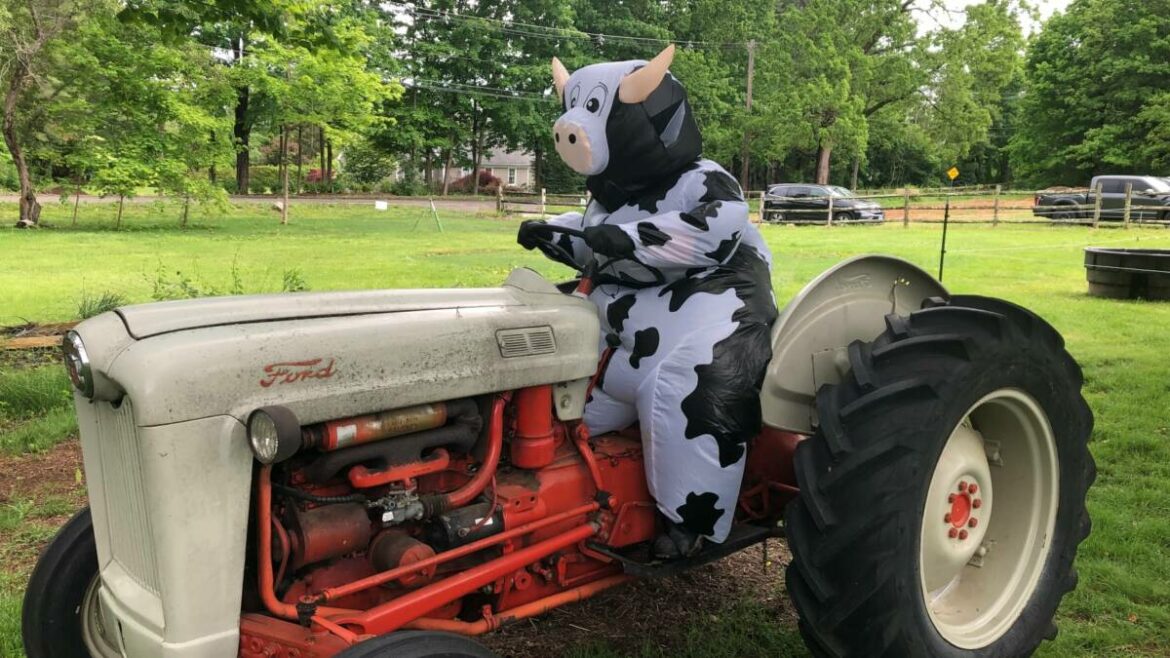 Ploppy the Cow was the promoter of Cow Plop Bingo at Guardians Farm in Southbury.

MONROE, CT — Ploppy the Cow has been trying to hold in her excitement over the Monroe Playground Foundation’s Cow Plop Bingo event, to be held at Guardians Farm in Southbury this Sunday, from 3 to 6 p.m.

Ploppy’s friends, cows Seneca, Penelope and Tiffany, will take turns doing their business on a field of squares — and bingo participants will hope a pile lands on their square. 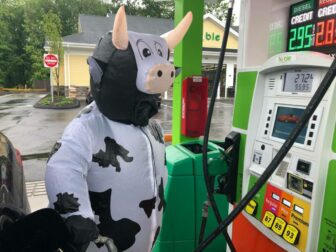 Ploppy is as upset as anyone over rising prices at the pump.

“There’s a cow on the loose in Monroe, but rather than being rounded up, she’s promoting the Monroe Playground Foundation’s Cow Plop,” said Dan Keene, chairman of the foundation.

Proceeds from the event will benefit The Wolfe’s Den Playground, which will be built at Wolfe Park, replacing the dated, wooden Kids Kreation Playground. 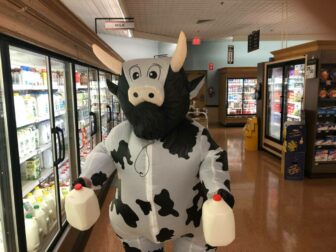 Ploppy finds an easier way to get milk, chilled and ready to drink.

Ploppy had hoped to march behind the MPF float during the Memorial Day Parade last Sunday, but the event was rained out. So instead, she’s hit the pavement to promote Cow Plop Bingo, visiting the Monroe Police Department and local businesses, while shopping, doing her banking and stopping for gas.

Photos on the MPF Facebook page have chronicled Ploppy’s journey.

“We’ve gotten a lot of great reactions on social media,” Keene said. “People have really been reacting to Ploppy the Cow.”

It costs $10 a square to play Cow Plop Bingo and squares are still available at https://www.monroeplaygroundfoundation.org/poop. 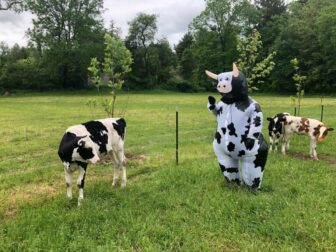 Ploppy’s friends will be the stars of Cow Plop Bingo at Guardians Farm this Sunday.

Prizes will be awarded in a Third Place round (3 percent of ticket sales), Second Place Round (5 percent of sales) and Grand Prize Round (10 percent).

Ploppy rearranged her busy schedule, so she can make an appearance at Guardians Farm, 99 Bates Rock Road in Southbury, on Sunday.

Those who want to meet her are welcome to attend. People can also watch a live video feed of the “plopping” or look for Facebook Live updates from the Monroe Playground Foundation throughout the day.

“If the cow doesn’t plop within the time period, we’ll do a drawing,” Keene said of the three rounds.

Making the Wolfe’s Den a reality 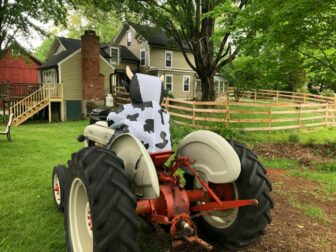 Val Stalzman won a MPF contest to name the new playground The Wolfe’s Den, and the Monroe Playground Foundation, a nonprofit, has organized a number of family-oriented events with a goal of raising $400,000 for the playground, which will have a community build.

Among the fundraisers run by the foundation were Friday Family Supper Nights, A Sundae on the Green, Pictures in the Park and Light Up Monroe, a friendly contest with judges for the best Christmas light displays in town.

People can also dedicate pickets for the fence and sponsor components of the playground, such as slides and parallel bars. Keene said these opportunities are still available.

The foundation received a boost during the last town budget process, when First Selectman Ken Kellogg included $100,000 for the playground in his proposal. With that, Keene said around $230,000 has been raised so far.

“We’re at 60 percent, if you include the money from the town, which is fantastic,” he said. “It’s amazing how people have gotten behind this playground, even in spite of COVID — and we’re grateful for all the support.”

Keene said the goal is to finish the fundraising by the end of this year. If it reaches its goal, the foundation will then move quickly to get volunteers and start construction by the spring of 2022.