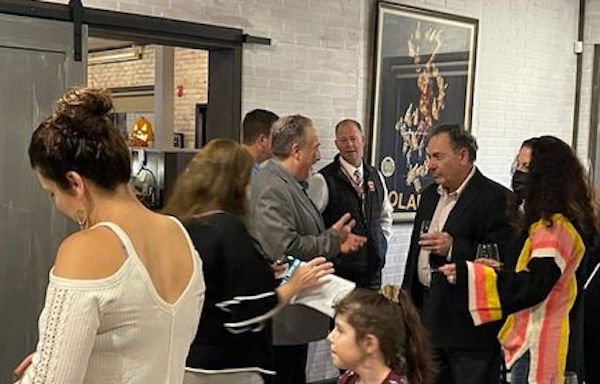 MONROE, CT — Michael Ganino, vice chairman of the Monroe Playground Foundation’s board of directors, recently announced that construction of the new The Wolfe’s Den playground at Wolfe Park may begin by May of 2022. The project will replace the existing, wooden Kids’ Kreation Playground.

“Our primary goal right now is to complete the fundraising and also to gather 2,000 people for a community build that will last six days from start to finish,” Ganino said.

The Monroe Playground Foundation has held pasta dinners, ice cream socials and events like Light Up Monroe to raise money for the project. Ganino said $150,000 more is needed between now and May.

To that end, Robert Westlund, of Monroe, donated $1,000 on behalf of his business. Westlund also donated another $1,000 on behalf of Monroe SEPTA, because he said the Monroe Playground Foundation has gone to great lengths to make the new playground ADA complaint, which is consistent with SEPTA’s mission of advocating for children with special needs.

“I encourage anybody, whether on a corporate level or private, to make a donation as well,” Westlund said at the Oct. 28 SEPTA meeting.

During the event, Westlund said Keith Romano, also of Monroe, is a contractor and friend who reached out to him about donating to the playground. Romano, who owns R&R Site Development, will volunteer his services by demolishing the old playground to make way for the new one.

Westlund volunteers as a member of the Planning and Zoning Commission in town and Romano serves as chairman of the Inland Wetlands Commission.

“We’re really thankful, very much, for your donation and to everyone in town who comes out and supports all the activities — and just the spirit of what we’re trying to do,” Ganino said.

The Oct. 28 gathering was attended by Superintendent of Schools Joseph Kobza and Darleen Fensore, who is the director of Student Support Services for Monroe public schools.

When Ray Giovanni, a treasurer for Monroe SEPTA, introduced Ganino at the gathering, he praised him for the hours he has dedicated to the playground project. But Ganino shared credit with all of the volunteers.

“I’m just a small part of a great team that’s trying to make that playground a reality for the kids of today, the kids who are gonna be in town and the kids who haven’t even been born yet, for the next generation or so,” Ganino said. 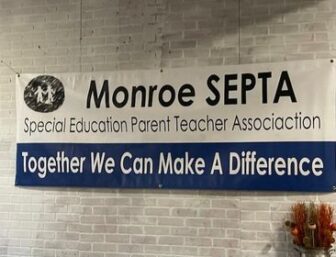 Monroe SEPTA was started by a small group of parents with an interest in special education. Its website says:

We aim to bring together parents, families, and educators to share their experiences and perspectives, provide parents with information on navigating the special education system, increase the community’s understanding of children’s abilities to reach their full potential, and enrich the lives of children and their families through educational and social opportunities.

For information or to become involved, visit Monroe SEPTA’s website by clicking here.