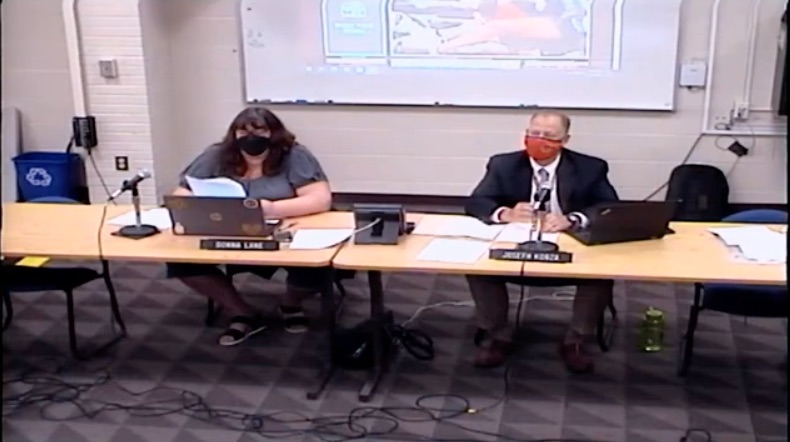 Board of Education Chairwoman Donna Lane, left, reads a letter aloud during the board's meeting Monday as Superintendent of Schools Joseph Kobza looks on.

MONROE, CT — A week after some parents criticized a proposed policy meant to make transgender and gender non-conforming youth feel safe and protected from bullying in school, supporters submitted letters to be read aloud at Monday’s Board of Education meeting.

Then Vice Chairman George A. King III expressed his belief that some of the letters Chairwoman Donna Lane read into the record attacked other citizens and their opinions. It sparked a debate among board members over letters and the transgender policy itself.

“I disagree with reading aloud any letters going forward that attack other townspeople or call them out specifically,” King said. “The generalization, the questioning, the assumptions should not be made. You advocate for your viewpoint and you provide evidence of that viewpoint and your standing on it and that’s it. That is what public participation was for.”

King said his problem with the tone of some of the letters from supporters of the transgender policy has nothing to do with their position. He said he opposes all letters that attack a citizen or a position, regardless of who writes it.

King also suggested limiting the length of letters, so reading them would take no longer than the three minutes allotted members of the public who speak in person at meetings.

Dr. Alan Vaglivelo, a fellow board member, complained about a letter against the transgender policy and its author, Board of Education member Nick Kapoor, that was read last week.

“I just wish there was more outrage last week when that letter was written that was so disgusting that people were calling my house saying, ‘what is going on?'” Vaglivelo said.

Lane reminded him of the board attorney’s legal opinion that elected officials are more open to criticism and that there was nothing maliciously false, harassing or intimidating in last week’s letters, so it was fine to read the letters as is.

Though legal, Vaglivelo contended the letter calling the policy disgusting and Kapoor dangerous was still appalling.

David Ferris, a board member, suggested including citizens’ letters in the meeting packets and minutes without reading them at meetings.

“What if we get inundated with 20, 30, 40 letters on a hot topic?” Ferris asked. “Are we going to sit here for two hours, while we read all of them? Regardless of the issue, we should be fair and consistent with all letters we receive.”

Lane said the board would have to agree on that and King, who chairs the board’s Policy Committee, said they could discuss a letters policy at their next meeting on Oct. 4.