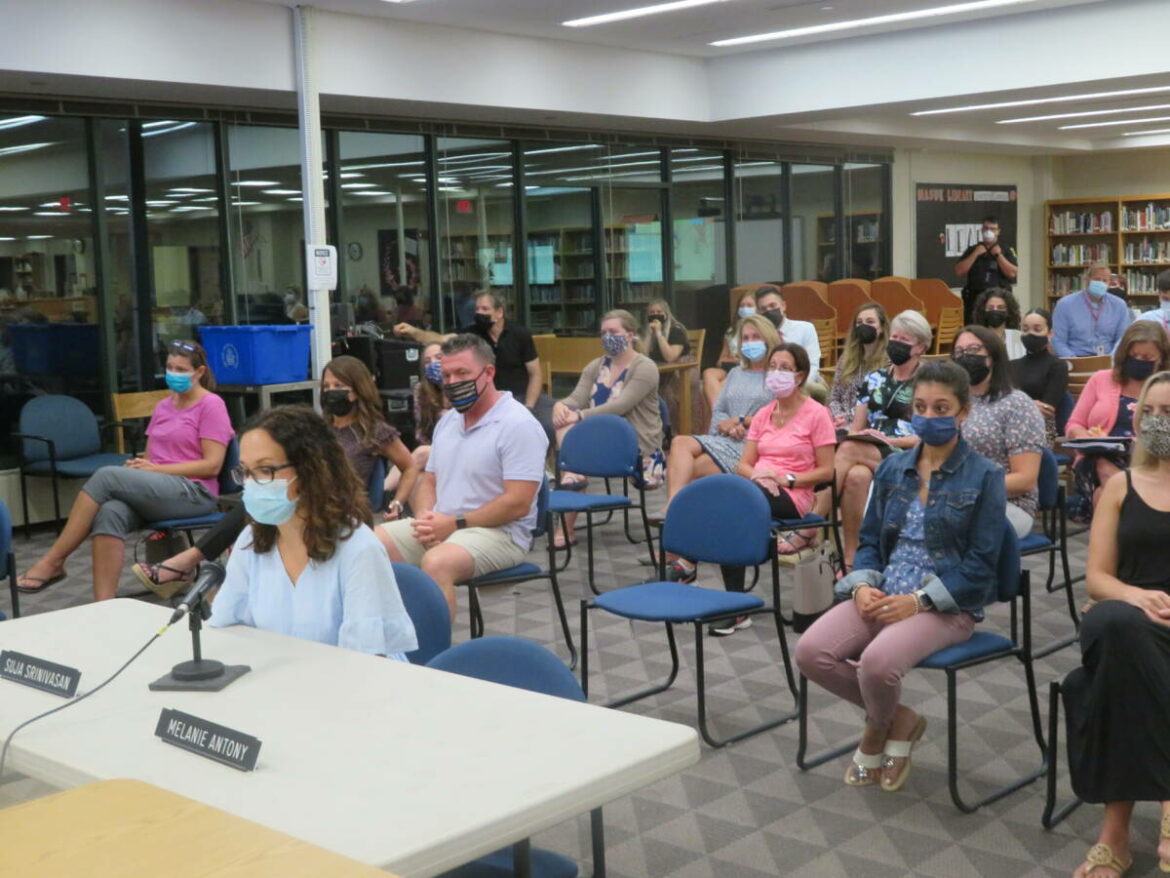 Janice Persico, the parent of a transgender boy, speaks in favor of adopting a Transgender and Gender Non-Conforming Youth Policy during the Board of Education meeting at Masuk High School Monday.

MONROE, CT — A proposed policy meant to make transgender and gender non-conforming youth feel safe and protected from bullying in school faces criticism from several parents, who worry about the fairness of girls’ sports and say they fear for their daughters’ safety in bathrooms and locker rooms.

These sentiments were expressed at the Board of Education’s Policy Committee and regular board meetings Monday night.

In a letter read aloud by Chairwoman Donna Lane, one parent called the proposal “dangerous” and “disgusting” and called its author, Board of Education member Nick Kapoor, “dangerous.”

However, not everyone spoke against the proposal for a Transgender and Gender Non-Conforming Youth Policy.

Janice Persico, whose daughter, now 15, came out as a boy last year, spoke at both meetings.

Persico said her son has struggled with the bathroom issue and had to be taken to Yale New Haven Hospital twice, because of suicidal thoughts.

Persico said her child does not play sports and she does not know what the solution to the bathroom issue should be.

“We have amazing teachers and schools, which should be good for all kids, no matter how they identify as,” she said at the Policy Committee meeting.

Michael Osborne, who has two daughters, told Persico he sympathizes with her, but that he disagrees with the policy.

“I want to protect and preserve their innocence at their age,” Osborne said of his children. “It may sound insensitive, but it should be what’s for the greater good instead of making the majority struggle for one person.”

“Transgender are not out to hurt anyone,” Persico said, adding she could also see her fifth grade daughter saying she does not want a boy in her bathroom.

Osborne said he knows a child who is transitioning, whose story the younger sister shared with friends. “And now they’re questioning themselves, ‘am I a girl or a boy?'” Osborne said. “My kid doesn’t know if there’s a Santa Claus,” he added of the impressionable ages. “I think schools should teach and not be involved in political rhetoric.”

David Orr and his wife, Michelle, also attended the Policy Committee and school board meetings to express their opposition to the policy.

David Orr said he believes it is an imposition of transgender issues on children who are not at the appropriate age and a “severe imposition on women’s rights.”

He said biological boys have higher bone density, muscle mass and testosterone than girls, so transgender female athletes would put biological girls at a tremendous disadvantage in sports.

Orr said transgender youth can use the nurses’ bathrooms at school. Of transgender girls sharing the girls’ bathrooms, he said, “my daughter is not comfortable with it.”

“None of us want to see transgender youth being mistreated,” Michelle Orr said. “We already have a bullying policy. I don’t want to see any child bullied or mistreated, but there has to be something better for the things my husband mentioned.”

Carrie Lampley said she does not have a transgender kid or know anyone who does, but added her family stands for diversity, tolerance, inclusion and education.

“My daughter thinks this is ridiculous and wonders why all of this is going on,” Lampley said of the ongoing debate.

In response to parents who say their daughters are not comfortable sharing bathrooms, Lampley said, “leading questions to children give them opinions.”

During the Board of Education’s regular meeting, Chairwoman Donna Lane read letters from some parents into the record.

One was from Gary Corigliano, who expressed opposition to the policy and claimed it was “rushed” and “not thought through.” He expressed concerns over the fairness of school sports and the best interests of safety for all.

“These are our children. They need to be able to be children without being accosted by an agenda that includes Critical Race Theory and LGBTQ issues,” Corigliano wrote. “Our children do not deserve to have transgenderism rammed down their throats. This agenda put forth by Mr. Kapoor is not only disgusting, it’s dangerous. Our children, our young daughters in particular, are being placed in danger.”

Corigliano posed a scenario of a boy who identifies as a girl being allowed into a girls’ bathroom or locker room, which he said increases “the potential of our girls to be assaulted, raped or violated.”

“Any parent in their right mind should rail against this,” Corigliano continued. “Our children need to be kept safe and also need to be shielded away from this dangerous and disgusting agenda.”

“Whatever happened to just letting our kids be kids?” he asked. “It’s clear that our education system is unfair and unsafe and is barreling off the rails. This school system needs a complete overhaul, which includes getting rid of dangerous people like Mr. Kapoor.”

Later in the meeting, Dr. Alan Vaglivelo, a board member, asked Lane if there is a policy against allowing personal attacks on board members.

Lane said there is a policy against personal attacks against staff members, but Board of Education members are elected officials, who are more open to public scrutiny.

In another letter, Christina Grech also expressed concerns against Kapoor’s policy proposal, saying her daughter would feel uncomfortable changing in front of someone who is not a biological female or sharing the same bathroom.

Of Critical Race Theory, Lane said after the meeting, “the board is not taking up that issue, because we do not teach CRT.”

Persico spoke a second time during the public comment portion of the regular board meeting.

“It’s a very complicated situation and I hear people saying, ‘think of the greater good of the kids,’ and of course we do. That is actually in all of our hearts,” she said.

“And actually, it’s Connecticut State law that they are allowed to use the bathroom of their identity — and locker room,” she added. “Maybe they could debate that at the State level to change that, but we should absolutely have a policy in our town on how to make these kids feel included.”

After the issue was discussed, Persico told The Sun, “I’m surprised more people aren’t talking about being inclusive and welcoming. They are unique students, who have unique needs. They should have a place where they can go to the bathroom.”

Persico said the nurse’s office is only one bathroom option in the entire school building.

“If you look at the kids in Masuk, you often don’t know if someone is transgender, unless they tell you or you knew them before the transition,” she said.

Despite opposition expressed to a Transgender and Gender Non-Conforming Youth Policy, Kapoor, who is concerned over transgender kids who struggle in school and statistically have higher rates of attempted suicide, will continue efforts to have a policy for Monroe public schools.

“Our community is at its best when citizens participate in our government processes,” Kapoor said after the meeting. “I thank everyone for coming out tonight and am looking forward to continuing the conversation on this policy.”