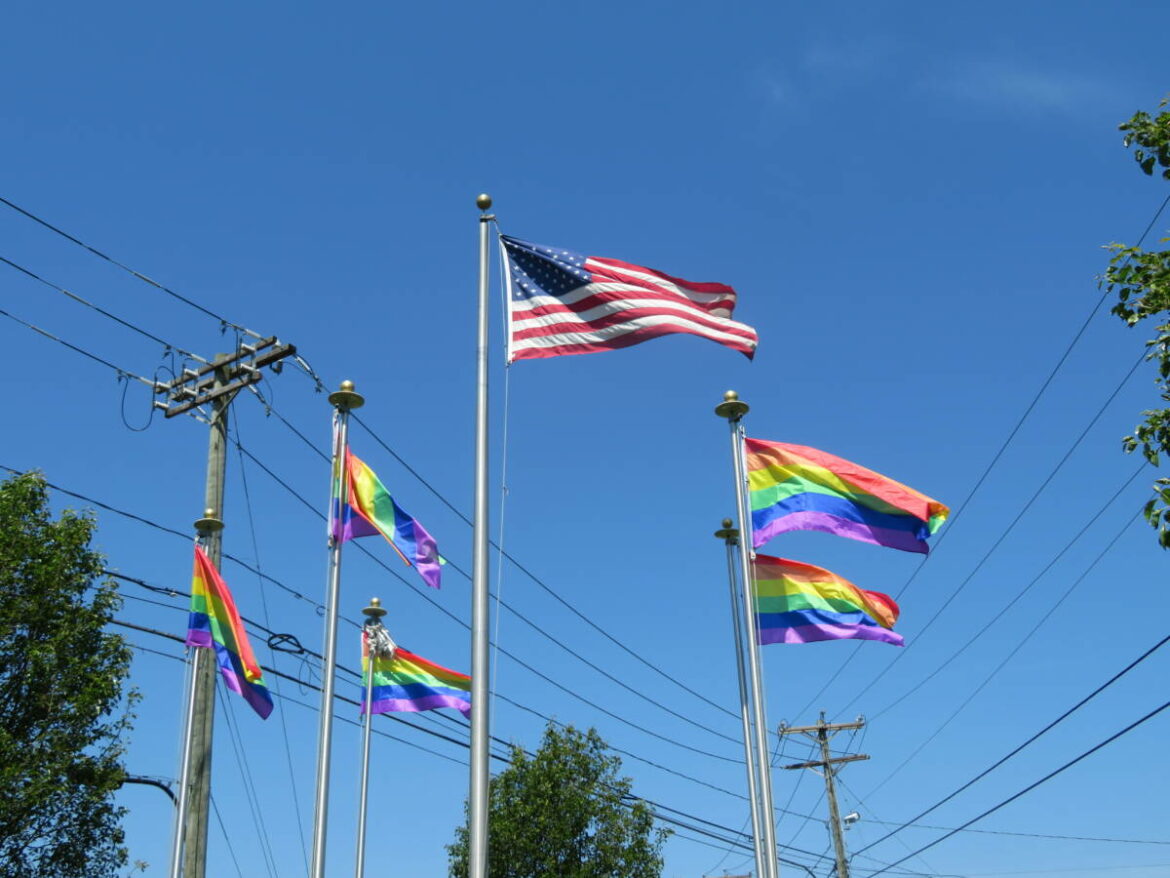 Pride Flags fly among the Stars 'n Stripes in the Save Our Stepney Task Force's display on Stepney Green in recognition of Pride Month.

MONROE, CT — Board of Education members plan to discuss a proposal to have a Transgender and Gender Non-Conforming Youth Policy at a future meeting. Its goal is to support the safety and well-being of students who identify as transgender.

The National Center for Transgender Equality found that 75 percent of transgender youth feel unsafe at school, those who persevere have significantly lower GPAs, were more likely to miss school out of concern for their safety, and were less likely to plan on continuing their education, according to Nick Kapoor, the board member who proposed the policy.

“The Centers for Disease Control found almost two percent of high school students are transgender, and of those two percent, 27 percent feel unsafe at or going to and from school, 35 percent are bullied at school, and 35 percent have attempted suicide,” Kapoor told fellow board members at their meeting on June 14.

Though the state of Connecticut is not requiring all school districts to create a transgender policy, Kapoor says the Monroe Board of Education can draft its own policy on how to handle issues before they arise.

Kapoor presented a resolution asking the school board to require its Policy Committee to form a community task force to study the issue, providing the opportunity for a community conversation, before the Policy Committee would draft a transgender student policy for the entire Board of Education to review, make any necessary changes and consider for adoption.

After a spirited discussion at the June 14 meeting, the school board agreed to table the issue to allow board members more time to consider what is being proposed, before discussing it again at their next meeting.

During the meeting, Kapoor shared his story of the “mental anguish” he felt as a 16-year-old going to school at St. Joseph High School in 2006, trying to find himself before coming out as gay.

“I could tell you about the five years of my life from 16 to 21 years old where I had to suppress who I was because of fear for my physical safety,” Kapoor said. “But instead, let’s move forward. Let’s make a positive contribution to this discussion and start the process of creating this needed policy.”

“I’d like you to imagine looking in the mirror and not seeing yourself as the person that you actually believe you are,” he said. “It is completely disorienting. The mental and physical anguish that transgender youth go through is unimaginable.”

Upon NEASC’s recommendation, Masuk had a climate survey in which 922 students participated. Ceccolini said 41 percent of students who do not identify as heterosexual agreed that discrimination based on sexual orientation is a problem at the school.

Vice Chairman George A. King III, who chairs the Policy Committee, said there was discussion at the committee level before members reached a consensus to table the issue for future discussion.

Kapoor then asked that the resolution be included on the June 14 agenda for the entire board, which Chairwoman Donna Lane allowed.

“In my 12 years, this has never come up that a board member asked for a specific policy,” Lane said, “so I asked our attorney for a legal opinion on this.”

In a letter to the board, Attorney Stephen Sedor said the Board of Education is a “policy creating entity.”

“Therefore, it would be appropriate for the board to have a discussion at a meeting to determine whether it wishes to have a standalone transgender policy,” Sedor wrote. “If it determines that it should have such a policy, then it would vote to do so. It would then refer to the Policy Committee the responsibility for creating a policy and submitting it to the full board for a vote on the policy.”

However, he also found that “it does not seem appropriate” for the board to have a vote on whether to specifically adopt, or pass in full as written, the proposed resolution. “The board currently has in place a process for creating and implementing policies of the board,” Sedor wrote.

During the board discussion, King mentioned the possible scenario of the Monroe Board of Education crafting its own policy, only for state officials to come up with different requirements.

Currently, there are existing policies for students in protected classes. While the board could create a policy, King noted that school districts follow procedures to carry policies out.

“I’m concerned about starting to do this breakout without specific legislation that says, ‘this is what you need to conform to’ and then get into details about how the district is going to operate that,” King said. “We don’t include procedures in our policies.”

Shannon Reilly, the board secretary, said she is concerned over potential legal issues.

Kapoor expressed his opinion that having a policy to point to would actually protect the board from litigation.

Kapoor said the Connecticut Association of Boards of Education (CABE) recommends having a transgender policy as a best practice, and has a template of a policy to guide the drafting of one, so Monroe’s school board would not have to start with a blank page.

He also said any policy the board would want to adopt would be reviewed by its attorney first to ensure there are no legal issues. If the state of Connecticut comes out with requirements after that, the policy could be revised to follow any new state guidelines.

Fellow board members, Dr. Alan Vaglivelo and Jerry Stevens, spoke in favor of Kapoor’s resolution. Stevens said Kapoor was not asking for anything specific that night and just wanted to get the process of drafting a policy underway.

When Kapoor pushed for a decision, rather than tabling the resolution for further discussion, several board members pushed back, saying more time is needed.

Lane said the board never passes a policy on the first read, adding there are typically several meetings and discussions before a vote. Christina Cascella, a board member, said most members only had a copy of the resolution since the weekend.

“To me, this has nothing to do with the topic,” Cascella said. “It really has to do with the procedure and the process in place. Are we setting a precedent by allowing any one of us to take a topic near and dear to our hearts and asking board members to force in onto Policy — and asking them to take it up? That is ultimately what it comes down to.”

Kapoor said he believes it is okay for a board member to ask for a policy to be created, so long as a majority of the board agrees.

Lane stressed that no one was saying the Monroe Board of Education should not have a transgender student policy or that it is a bad idea. She said board members simply need more time to consider and discuss the issue, rather than rushing to make a decision.