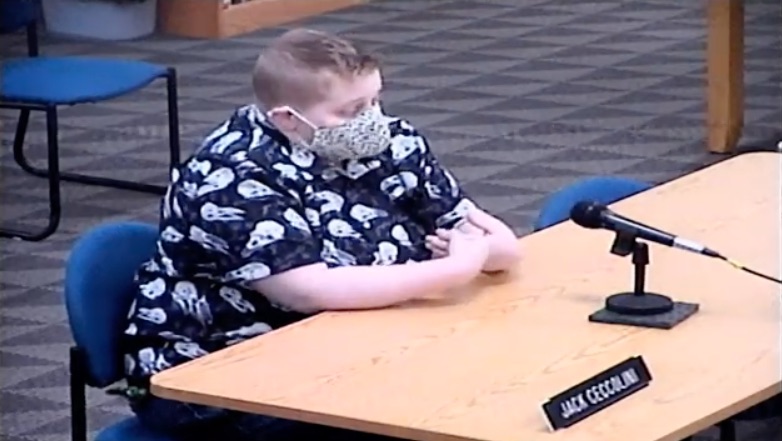 Morgan Robison, who graduated from Masuk High School's Class of 2011 and is gender nonconforming, speaks in favor of a policy for Transgender and Gender Non-Conforming Youth during the Board of Education meeting Monday.

MONROE, CT — Supporters of adopting a new Transgender and Gender Non-Conforming Youth Policy spoke out at the Board of Education meeting Monday and submitted letters to persuade educators that more is needed to protect these students beyond what is already in place.

Though Connecticut statutes provide protections, Janice Persico, the parent of a transgender son, said she believes the district should go one step further by adopting a policy proposed by board member, Nick Kapoor.

“I needed this policy a year ago when my transgender son came out,” she said during the public comment portion of the meeting. “I had no idea what the Connecticut State law was. I had no idea what to do. Masuk is 100 percent supportive and loving and amazing, but no one can give me direction.”

If someone gave her a policy with direction, Persico said it would give her more of a feeling of support, love and the knowledge of what to do.

“We need to have this policy,” she said. “It’s a unique subset of students that have unique needs and they need this direction and support in our school system.”

“Things are changing and I think Nick’s policy is moving with the change,” said Jen Aguilar, a Town Council member speaking as a private citizen. “I want people fighting for these issues, because I want all the children to be included.”

While defending the proposal, proponents spoke of the alarmingly high rate of suicidal thoughts transgender and gender non-conforming students have, and tried to dispel opponents’ concerns over the fairness of girls’ sports and the safety of girls who share bathrooms.

Morgan Robison, an alum from Masuk’s Class of 2011, is gender non-conforming.

“A policy expansion to properly discover myself would have been helpful,” Robison said. “I can’t say I had tried to commit suicide, but the thoughts are there. Having a policy and expanding it is needed.”

When Robison went to Masuk they said students changed in the stalls in locker rooms, because no one wanted to get dressed in front of someone. Robison said they assume that has not changed.

Robison has transgender friends who do not feel safe going to a public bathroom alone. In school, Robison said these students just want a place to go to the bathroom quickly, so they can get back to class.

Erin Tammany was among several citizens submitting letters in favor of a Transgender and Gender Non-Conforming Youth Policy. She took exception to a letter read two weeks ago referring to the policy as “disgusting” and to Kapoor as “dangerous.”

“Transgender children are our children,” she said. “They are not second class citizens whom we should fear or call dangerous. What is dangerous is hatred, ignorance, and bigotry.”

Tammany said those who oppose the policy over fear of girls’ well-being in bathrooms are making transgendered students, who are “more susceptible to bullying and violence,” seem like “predators or deviants.”

“The comments made by dissenters at the last meeting struck me as horribly misinformed and abusive to those children who struggle with gender identity or who have chosen to forego cultural norms associated with gender,” Tammany wrote.

Kerri Vilaverde wrote that “a formal policy will remove ambiguity and the risk of inconsistent interpretations. Failure to allow students to use the restrooms, locker rooms, and athletic teams of their gender identity is already a violation of state law. But the needs of transgender students go beyond bathrooms and sports.”

Vilaverde said all children deserve a safe and engaging space at school. She expressed her admiration for parents of nonconforming children and thanked Kapoor and others who support the policy.

“We all want what is best for our children,” she closed. “We are neighbors and friends. We have more in common than not. I suspect most kids care more about which friends are in their classes … and not the gender identity of those classmates. A previous commenter said, ‘let the kids be kids.’ That’s exactly what we are trying to do.”

Patricia German, a parent in the school district, who is a psychiatric nurse at a local hospital, said, no matter what side they are on, “all parents want a safe, accepting environment where their children can access the resources” needed to “succeed academically, emotionally and socially.”

German cited statistics, including numbers from a American Academy of Pediatrics study showing more than half of transgender male teens, almost 30 percent of transgender female teens and over 40 percent of non-binary youth have reported attempting suicide in their lifetime.

“Having a plan that allows them to be their true selves with resources for them to use if they are bullied, in crisis or need support is allowing them to navigate these years equally with their peers,” German wrote.

Alex Kitchener, a former student of Monroe public schools, who is now a social worker and a mother of four, said she believes “explicit protections need to be in place for” for transgender and gender non-conforming youth.

“I competed in girls sports at Masuk and would have been happy to have any classmate on my team,” Kitchener wrote. “I would not have felt afraid to share a bathroom.”

She said the same goes for her three daughters and her son.

“Transgender and non-conforming youths do not feel accepted in school or many parts of society,” she wrote. “A policy like this shows Monroe Public School students regardless of gender identity that they are accepted at school as they are and that bullying them for their identity is not okay.”

Elisabeth Medaris wrote how the world has changed. She said the striving for diversity and inclusion — from race, religion, socio-economic background and gender to ability, embracing differences and accommodating needs to ensure a culture that is safe and inclusive is not liberal, but mainstream.

She said teaching children to discriminate or fear the LGBTQTIA community will make them “ill equipped to deal with reality.” “They will be disabled in their lives and careers,” she said.

“We must do everything possible to protect and nurture the lives of all of our students and that includes protecting trans students,” Medaris wrote.

Kate Briggs, who is the Democratic registrar in town submitted a letter, as a private citizen, in support of adopting a transgender and gender non-conforming youth policy for Monroe public schools.

“Transgender youth need our understanding and support, not our disdain and fear,” Briggs wrote. “And this can start by formally adopting a policy that acknowledges, respects and includes transgender students in our schools.”