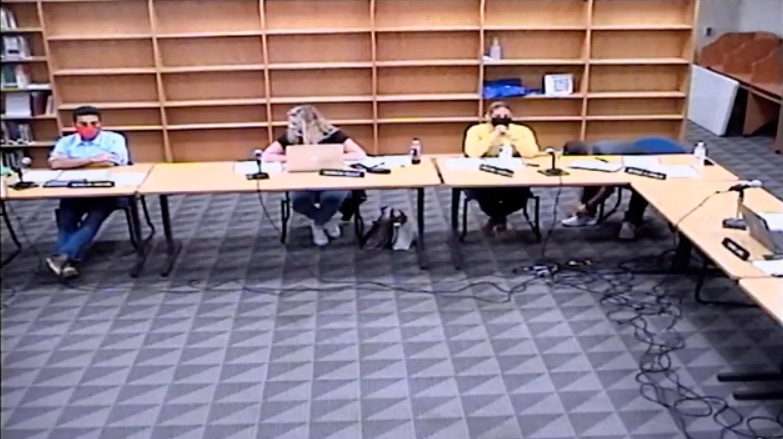 Nick Kapoor, a Board of Education member who is proposing a policy to protect transgender students, looks on as board member Shannon Reilly, center, speaks at Monday's meeting. Christine Cascella is the board member to the right.

MONROE, CT — Board of Education member Nick Kapoor is proposing a Transgender and Gender Non-Conforming Youth Policy to support the safety and well being of those students.

But after two weeks of passionate letters from parents for and against the proposal, fellow board member Shannon Reilly said the issue is dividing the town and questioned whether a new policy is needed at all.

After Chairwoman Donna Lane read letters in favor of a transgender policy at Monday’s meeting, Reilly took strong exception to those who implied the Board of Education is not doing enough for the district’s students.

“Under current policies and State statutes, they are protected. Yes,” Kobza said.

“They are protected?” Reilly asked.

Reilly wondered how much money the transgender policy proposal has cost the town in meetings, legal opinions, attorney fees and “divisiveness in our town.”

“It used to be, for a very long time at these board meetings, that you would not be political,” Reilly said. “Everybody was here giving up their time to all of the kids in our district, because we care. It wasn’t political. You would walk in and wouldn’t know if there was a ‘D’ or an ‘R’ next to their name. We worked together.”

“It’s a shame that that has changed — dramatically,” Reilly said. “That divisiveness that our kids are growing up with is causing anxiety that has been brought to the Monroe Board of Education. That makes me sad.”

Kapoor said he believes conversation around his policy proposal is sorely needed.

“As I said in my report, we have hard data, not from the State, not from the national level, from here at Masuk, from here in Monroe two years ago, that a large proportion, not a majority, a minority proportion of our students saw harassment based on sexual orientation and gender identity and that needs to be addressed,” Kapoor said.

“That’s part of our job as members of the Board of Education,” he continued. “This has nothing to do with Democrat versus Republican. This has to do with policies we should be implementing to be protecting all of our children.”

Kapoor said if a good policy creates controversy in town and people don’t want it, they have every right to say that. “But at the end of the day, it is up to us to make a decision about that,” he said.

“I think I’d like to leave it on that,” Reilly said.