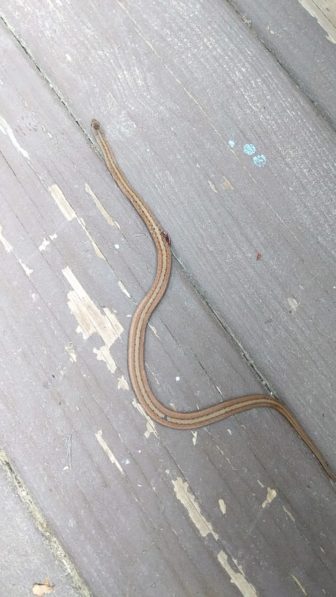 This ribbon snake snuck into a house on Birchwood Road. Contributed

A Birchwood Road man reported finding a snake inside his house on Aug. 16.

An officer identified the snake as a nonvenomous, adult ribbon snake and removed it from the house. Exclusion methods were discussed and a species fact sheet was provided.

A written warning was issued to the homeowner for failure to license his dog.

A squirrel, who suffered multiple leg fractures and suspected internal injuries after being hit by a car on Twin Brook Terrace on Aug. 16, was euthanized and cremated.

A Twin Brook Terrace resident reported seeing the squirrel crawling out of the street and going under her car in her driveway. A neighbor captured the animal without exposure and transported it to the Monroe Animal Control field office were it was evaluated.

A Crown View Drive resident told police she was walking her two dogs on a leash around 6 p.m. on Aug. 14, when two dogs charged off a neighbor’s property and into the street, while attempting to attack her dogs.

She was screaming while trying to fend off the dogs, police said, adding the other pet owner came outside and called the dogs back to the property.

Animal Control Officer Ed Risko said there were no previous complaints made at the Crown View Drive address.

The owner was issued an infraction ticket for first-degree nuisance, which is a $75 fine, given a written warning for failure to license, annoyance by dogs in roadway and a roaming dog violation.

The woman who made the complaint was issued a written warning for failure to license her dogs.

Bear with cubs heads to Monroe

A woman driving on Main Street reported seeing an adult black bear with yellow ear tags cross the road with its two cubs, between Bears Hill and Swamp roads in Newtown on Aug. 16.

The animals were heading east toward Hammertown Road in Monroe.

A species fact sheet with common cautions was provided, a sighting report form was completed and the Connecticut DEEP was notified.

A Scholz Road resident told police her dog was barking at a black bear in her neighbor’s driveway at 6:30 a.m. on Aug. 20.

She saw the bear walking north-east into the tree line toward her neighbor’s property.

A species fact sheet with common cautions was provided, a sighting report form completed and the Connecticut DEEP report form was updated. 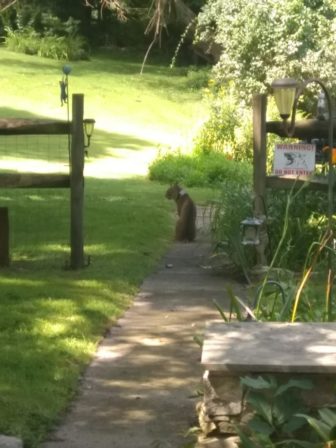 This bobcat was seen on Knollwood Street. Contributed

On Aug. 20, a woman driving on Monroe Turnpike reported seeing an adult bobcat crossing the roadway, near the intersection with East Village Road, as it headed north-east toward Barn Hill Road.

A Longview Road man reported seeing an adult bobcat across from his house, heading into the tree line toward Harvester Road Aug. 21. Risko said the animal had no collar or tags.

In all three cases, a sighting report form was completed and the Connecticut Department of Energy and Environmental Protection’s Bobcat project was updated.

A species fact sheet with common cautions was provided to the residents who reported seeing a bobcat.

A Blanket Meadow Road resident reported seeing a sick or injured skunk in her yard on Aug. 21. The animal died prior to an officer’s arrival.

Police said the woman’s dog was exposed (seen near the skunk). The dog is validly vaccinated and licensed. A rabies booster was provided by a veterinarian and a 45 day observation period was advised.

The skunk’s remains were removed for cremation.

Turtle may be laying eggs 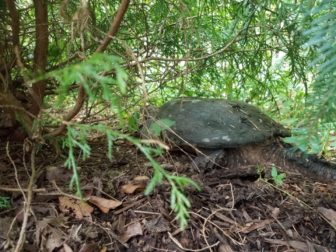 A Cross Hill Road woman expressed concern about a large snapping turtle crossing the street on Aug. 21, but an officer checked the area and found no traffic hazards.

Thirty minutes after the initial call, the officer returned to the woman’s address and found the turtle in a wood chip mulch pile, left undisturbed, according to the report.

A species fact sheet with common cautions was provided to the caller.

Animal Control Officer Ed Risko said a female snapping turtle will typically lay her eggs in early summer. Depending on when she mated, egg-laying may extend into autumn. She chooses a nesting site in an area of loose soil, sand, loam, vegetation debris or sawdust, where she digs a nest four-to-seven inches deep.