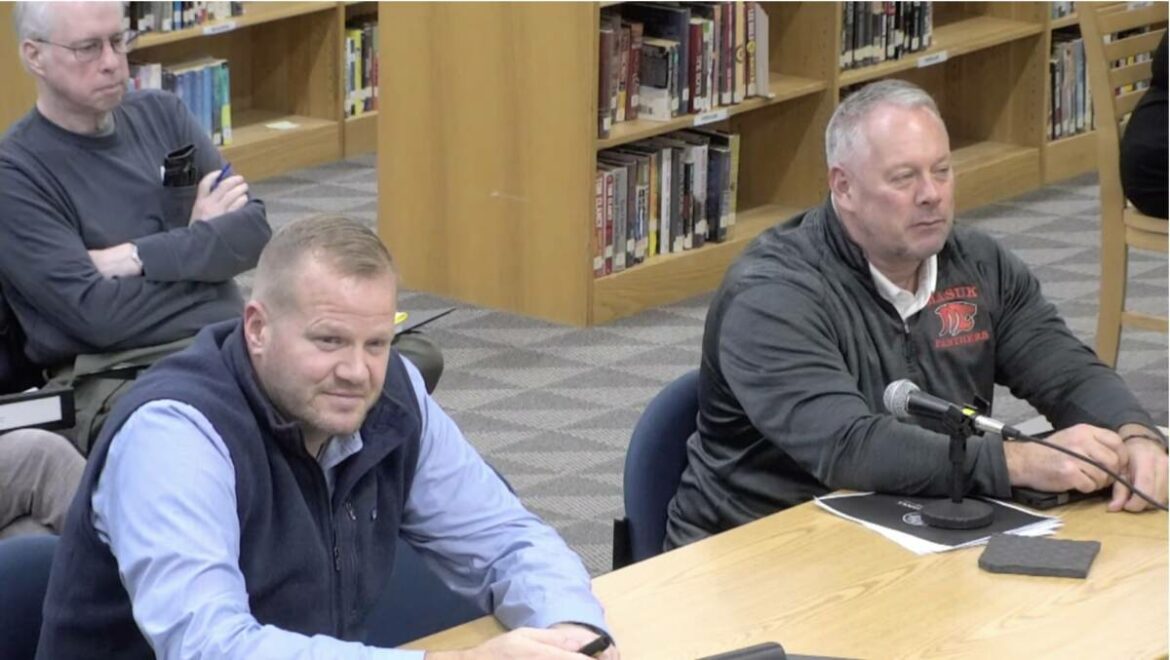 Masuk Principal Steve Swensen, left, and Athletic Director Craig Semple present their budget to the Board of Education last Tuesday.

MONROE, CT — A new teacher to reduce the number of study halls at Masuk High School, more money for instructional supplies, PSAT and SAT tests, and virtual classes Masuk does not offer are among the budget requests for fiscal year 2023-24.

The athletic budget includes a sharp increase for transportation due to a shortage of bus drivers, as well as additional funds for uniforms, equipment, police security at games and referees.

“There’s only certain lines we actually have control over,” Principal Steve Swensen said, “and of those lines, most of them came in at either zero percent or a very slight increase — and our instructional supplies actually went down not up.”

He and Athletic Director Craig Semple discussed their requests in more detail with the Board of Education at its meeting last week.

Superintendent of Schools Joseph Kobza is asking for a $68.1 million budget for Monroe’s public schools, which represents a 5.77 percent increase over the current $64.4 million budget. Last Tuesday, principals for all five of the town’s schools spoke about their requests.

Since then, board members have been conducting a review of the budget proposal in a series of workshops.

Rather than focusing on contractual obligations like salaries, insurance, transportation and utilities, school board members are giving more scrutiny to the remaining 0.75 percent of the proposed increase for new staffing, supplies, programs and equipment.

He said a new teacher would be hired after course requests come in, so Masuk can reduce the number of study halls by offering another course.

Over the last couple of years, Swensen said the high school has made it a priority to give kids their schedules as they leave in June. But a number of changes and requests come in after that.

He is asking for another $2,485 to pay counselors to come in for a day in the summer, so they can go over their case loads and students’ schedules before they are released. The line item for guidance would increase from $17,619 to $20,104.

Masuk’s departments average around $800 each for supplies, but overall, costs for instructional supplies for the entire school would decrease by 4.2 percent, according to Swensen.

He said much of the supplies budget is being driven by flexible seating. “A lot of teachers are looking for tables, rather than six rows of five desks,” he said of the increases, adding cuts were made in other areas to offset it.

Swensen is asking for a $3,500 increase for testing, due to rising costs for the PSAT and SAT. He said it is an expectation by the College Board, which Masuk cannot control.

“We’re getting increases in requests from students for some of those online courses,” he said of another expense, “so we increased that as well, because we’ve been overspending that line for the last couple years.”

The $4,500 increase is for the Virtual High School (VHS) and Plato. With VHS the teacher can be anywhere in the world, according to Swensen.

“It gives kids a chance to take courses in high school that we don’t offer,” Kobza said.

In the future, Swensen hopes a Masuk teacher can teach an online course, earning 25 spots in other classes for Masuk students, while saving money for the district. 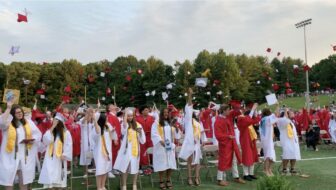 Masuk High School’s Class of 2022 throws their caps into the air to celebrate their graduation last spring.

Masuk has overspent its graduation budget the past few years, so Swensen asked for an increase from $14,300 to $17,000.

The high school already has police coverage for football games, but beyond that Swensen said students are organizing more after school events like the annual Latin Night.

“I increased our police coverage by about $1,500,” he said. “I don’t like to pass the costs of police down to the kids. I just think it’s something we should cover.” 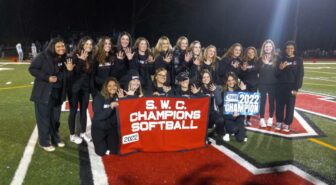 Players on Masuk’s 2022 softball team show off their championship rings at halftime of their school’s home football game against Newtown.

Semple, who was hired from Daniel Hand High School last spring, told board members he had an opportunity to audit Masuk’s sports program, and had a lot of conversations with coaches and Swensen.

“I really did a thorough audit of where we were and where we wanted to take the program,” he said. “I felt the program, in general, was funded really well. There were just a few things I felt we could have had that would give the kids a great experience.”

Semple showed a breakdown of students’ participation in sports over the past five years. In 2017-18 Masuk had 619 athletes, which dropped during the COVID-19 pandemic, before steadily climbing back up. In 2021-22, Masuk had 576 athletes, 56 more than the prior year.

“I want to get back to 2017-18 with roughly 65 percent of our kids playing sports, maybe 70 depending on how many kids are two sport athletes,” Semple said. “We’re climbing back. This year we’ll be close to 17-18 in regard to kids participating.”

Rentals and leases for things like use of the driving range at Whitney Farms Golf Course remained flat at $11,750. The biggest increase was for bus transportation.

“We saw in the first season an 11 percent increase in transportation costs,” Semple said. “But we’ve been trying to do some things.”

He said Masuk moved a lot of games to later times and to Saturdays so the bus company, All-Star, could accommodate them. Semple noted this can be done for the high school, but not the middle school.

“It’s helped, but there’s always gonna be those sub-varsity games that we can’t get our kids to,” he said. “Those are developmental programs and we still need to play those games.”

“They go up, pretty much annually and they factor in the costs of getting them to events,” Semple said. “We can’t control that, but we also offset that with gate receipts.”

The budget for new uniforms would rise from $23,050 to $32,000 due to an increase in production costs. “Kids should be able to have a brand new uniform in their four years here,” Semple said of keeping up with the cycle for replacing uniforms.

Uniform reconditioning for things like football helmets and pads, ice hockey, lacrosse and other sports would rise from $7,500 to $10,400.

“I wanted to add some field hockey goalie equipment,” Semple said. “And the lacrosse helmets needed to be reconditioned too.” 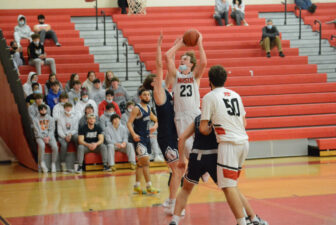 The Panthers’ Sean Minnick drives to the basket against Immaculate in a game last season.

Next year there will be a 35-second shot clock for varsity basketball and Swensen said someone needs to be paid to manage it during games.

Other athletic costs include money for Hudl Assist, which breaks down game film for coaches and players, who also use it for recruiting. Semple called it “probably the most important technological tool.”

“I think if I had to have just one thing for our kids in terms of supplies and equipment, that would be Hudl,” he said. “If you want to compete, everybody needs the opportunity to see where they’re making mistakes and how we can correct them, and what things we can do to be better.” 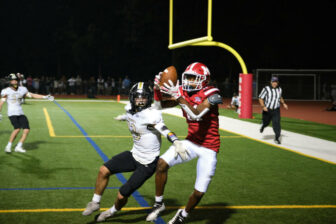 Jeff Fulchino, a board member, asked if historical data shows gate receipt revenue as stable from year-t0-year, since it is used to offset program costs.

Kobza said his administration was conservative with its $26,000 estimate for next year’s budget. Last year, Masuk brought in $35,000 and it is already trending well this year, with $23,000 in the fall and revenue from the entire boys and girls basketball seasons yet to come in.

“A lot of times it depends on if the Thanksgiving Game is home and it was this year,” Kobza said of the annual football game. “It depends on the type of season you’re having. We had a very successful football season with some interesting matchups. We’ve never played Trumbull before.”

Kobza also noted how the Panthers played against St. Joes for the first time since the 1980s.

Chairman David Ferris asked if football and basketball games are the ones Masuk traditionally charges admission for. Semple said yes, adding they are looking into charging for other events held in the stadium, such as boys and girls lacrosse.

“Are there other districts doing that?” Ferris asked.

“Oh yeah! The district I came from, we charged for everything,” Semple said, “and my number was around 50 in gate receipts revenue.”

“So it’s something we could consider down the line?” Ferris asked.

“It’s definitely something to consider,” Kobza said. “My only hesitation with it is what was your surcharge? A lot of times the people you’re charging to go to the game are the same people paying the surcharge.”

Semple agreed that charging admission for all games is a “slippery slope” because of the surcharge families pay for their children to play high school sports. 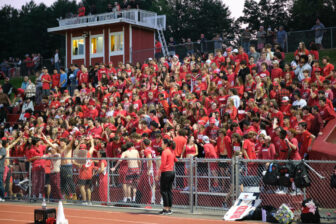 Fulchino asked Semple about the condition of Masuk’s facilities compared to similar size schools in Connecticut.

“The existing facility we have is top grade, but we definitely could use additional facilities,” Semple said. “A second turf field would be tremendous for this school and this community. We would get a lot out of it. A typical turf field gets in and around 3,000 hours a year verses to a grass field, which gets 300 with lights.”

“This program would support a turf field in terms of usage without a doubt,” he added, “so I would think that’s probably the only thing that’s missing that would put us on equal footing with every program of this size and scope, in my estimation.”

“Would you say most other schools our size have a second turf field?” Fulchino asked.