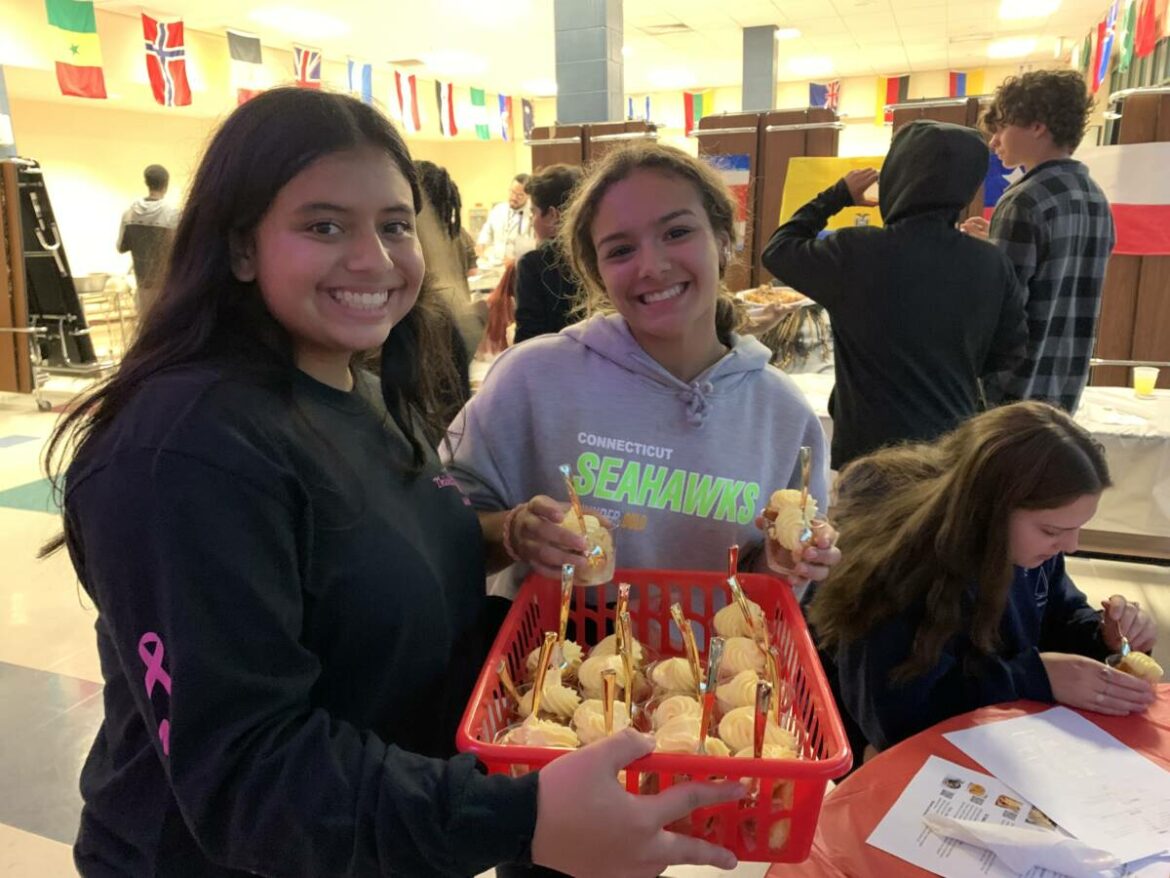 Tres leches was the dessert for Latin Night at Masuk High School Thursday.

“This is an important event for Hispanic Heritage Month,” said Sofia Nwosu, a senior. “We like to try to represent the different Hispanic cultures in our school.” 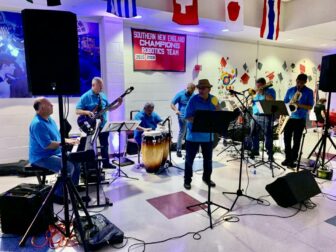 “We had a cultural fair in our cafeteria this year during the lunch waves,” Silvestro said. “In our school, we’re learning to accept and share our cultures.”

“It’s more than being aware of a culture,” Hancox said. “It’s experiencing the culture.”

In addition to the Masuk Spanish Club, student contributions came from Peer Leadership and the Black Student Union. To pay for the dinner and party, students sold tickets, charging $15 for adults and $10 for students. Students who only wanted to attend the party could gain admission for five dollars. 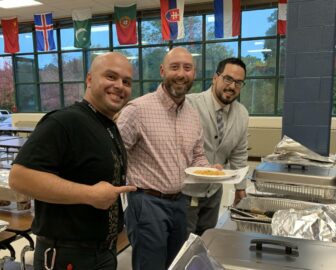 On Thursday, the Castillo brothers and Assistant Principal Ian Lowell prepared plates of food for the guests, which included students, staff, parents and the public at large.

“It gives students an opportunity to have a leadership role,” Joel Castillo said of the event. “They’re managing the front. They’re waiting on tables. A lot of them created the menu and did the artwork on the walls.”

Among the artwork was a display with “did you know?” facts about Latin figures in a variety of fields. Castillo’s personal favorite was the late Pittsburgh Pirate’s baseball star Roberto Clemente, his idol growing up.

The event had a total of about 165 participants, including adults and students, 20 who worked as waiters and five as hosts, according to Castillo.

Nwosu, Silvestro and Hancox worked with Joel Castillo on the planning, and Hancox was in charge of keeping everything within the budget.

“Mr. Castillo is a really great teacher,” Silvestro said. “He did a lot of work outside this school. He paid for things with his own money.” 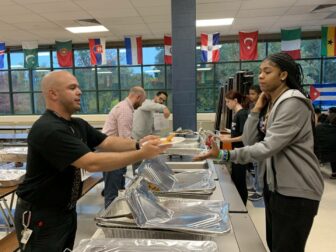 Joel Castillo hands a meal to a Masuk student.

Caterers included Silva’s Blessed Hands, owned by Edna and Fausto Silva, which provided the pork and rice; Gaby’s Grandma’s Catering, owned by Marta Reyes, which made frituras and fried treats; and Angie Castillo, who made tres leches for dessert.

“I think it’s a fantastic event that allows us to celebrate some of the diversity and different cultures at Masuk,” Principal Steve Swensen said.

“Hats off to Joel and Jason Castillo and their family for making this the event it is every year,” Kobza said. “It’s such a great way for our town to celebrate its diversity.”

Joel Castillo said there are many aspects of culture, including food, music, clothing, language and religion to name a few. Castillo glanced over at Lucas Antunes, a sophomore, and called out, “Lucas, what’s your favorite two things about culture?”

“Most people you ask here, it’s food and music,” Castillo said with a smile.

“This is a great night,” he said. “We have a very diverse population that is increasing. I’m trying to teach my students that true unity is within the diversity of each other’s differences — and to celebrate each other’s uniqueness. It’s only going to bring us closer together.”