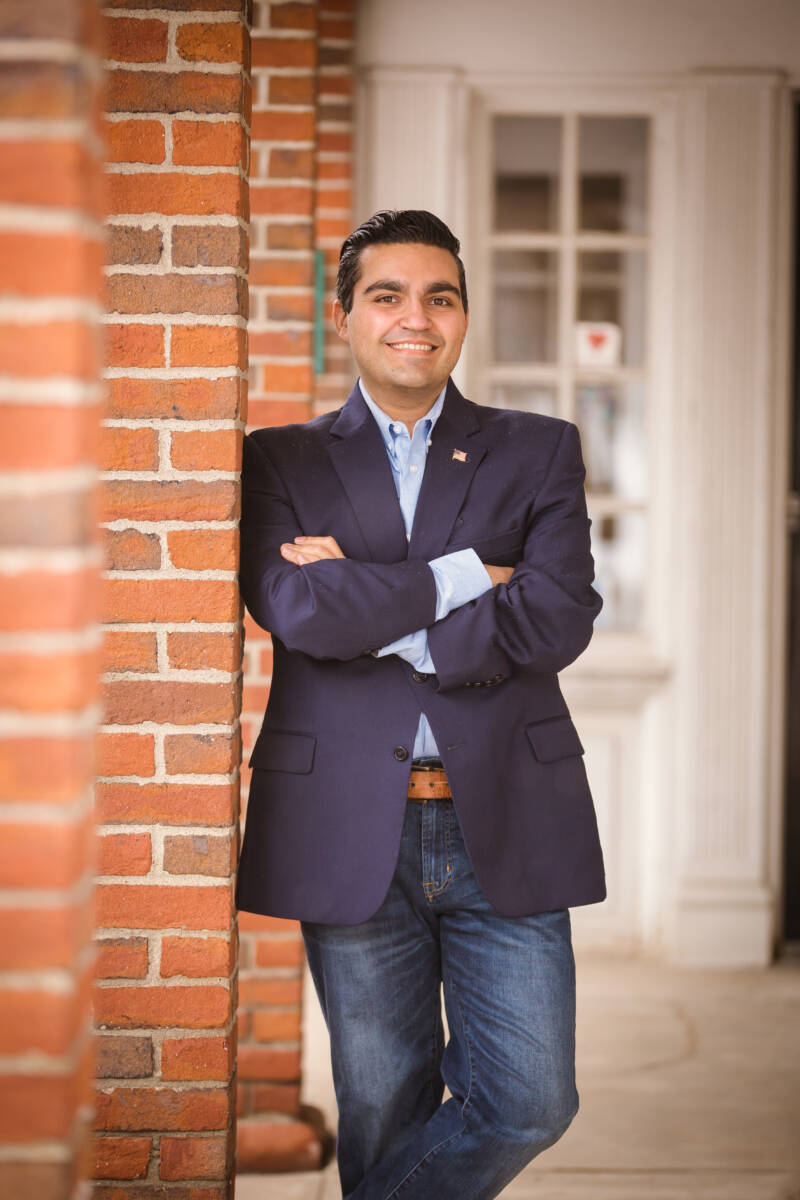 Nick Kapoor has served on the Board of Education since 2019.

MONROE, CT — A controversial Board of Education vote against the adoption of a transgender and gender non-conforming student policy led to the resignation of Nick Kapoor, the board member who proposed it.

Kapoor, a Democrat elected to the Board of Education in 2019, submitted his resignation letter to Town Clerk Vida Stone on Tuesday.

“With great sadness, but continued love for my hometown and hope that things can improve in the very near future, I resign my seat on the Monroe Board of Education effective immediately,” he said.

Reached for comment Wednesday, Board of Education Chairman David Ferris, a member of the board’s Republican majority, said, “the board would like to thank Nick for his service to the town and we wish him the best of luck. I’m looking forward to working with whoever his replacement may be.”

“Nick has been a conscientious board member ever since he joined,” said Superintendent of Schools Joseph Kobza. “He was always prepared for meetings and made a concerted effort to stay on top of educational issues that came from the national, state, and regional levels. I wish him the best of luck and am confident that he will continue a life of public service.”

Now the Democratic Town Committee will seek a candidate to finish Kapoor’s term, which expires in November of 2023. Currently, the Board of Education has six Republicans and two Democrats, Dr. Alan Vaglivelo and Jerry Stevens.

Patricia Paniccia, chair of the DTC, praised Kapoor for his years of service and said her party will put forth someone to fill his vacancy.

“Nick Kapoor is one of the most dedicated residents of Monroe, having served on the Town Council, run as a candidate for the 112th District and serving as a member of the Monroe Board of Education,” she said. “Unfortunately, he feels due to a recent vote and lack of serious discussions on issues very important to him, that the untenable atmosphere has led him to resign his position on the Monroe Board of Education. As residents of Monroe, we should all thank him for his time and efforts on our behalf.”

Kapoor declined further comment beyond his resignation letter, most of which echoes concerns he raised at the Board of Education’s Sept. 6 meeting, which had led to a heated response from Ferris. Here is the letter in its entirety:

The decision of the Board of Education from June 6 where the Board majority voted against adopting the Transgender and Gender Non-Conforming Student Policy continues to reverberate throughout the community. I’d like to address some of the comments made and questions I still have from that vote.

First, not one member from the Board majority spoke during the meeting while the motion was pending before the Board. Chairman Ferris said to the Monroe Sun after the vote, “I can’t speak for any of the individual no voters. It’s not a vote against transgender students. There are parents on this board with children in the LGBTQ+ community…” It was precisely a vote against transgender students – with no one from the opposition side willing to speak to the motion, how else could it be interpreted? Second, if it is true that there are parents on the Board with children in the LGBTQ+ community, wouldn’t they have wanted to take the opportunity to explain why they would vote against the interests of their own child?

The Monroe Sun continued, “Without sharing specific details for his own decision to vote no, Ferris said, “I wasn’t in favor of this specific policy, but I’m open to resolving some issues that come up in the future.” Ferris said the door is “not slammed shut” on the issue. “This board has not said no to anything, and that will continue.” After asking my colleagues twice publicly and twice privately to have a discussion so that we may try to come to a compromise on language to pass something, the answer was no. After asking for a public forum where we could interact with the public on this issue to have a more informed and interactive discussion, the answer was no. After asking members of the majority at the meeting to explain why they were about to vote against the policy, no one answered. No member of the majority has contacted me since June 6 in any way about this policy and how we can move it forward in direct contradiction of the Chair’s comments.

I have continued to ask what the plan is moving forward to continued silence. I thought a way to begin discussing this at a Board level would be a DEI committee, but this idea has been purposefully stalled in the Policy Committee for fifteen months with no movement. This inaction severely stretches the limits of our own policies commanding the Policy Committee to report back to the full Board “within a reasonable amount of time.” I would turn to Newtown and Easton/Redding as Boards of Education with model DEI committees.

There are a list of questions that I posed over a twelve-month period that have yet to be answered. To date, there has been no discussion on the merits of the transgender policy. The parents, and most importantly the students, who spoke in favor of it deserve at least that much. Isn’t it the responsibility of elected officials to discuss why they voted in the manner that they did? Seats on any elected body are a privilege bestowed upon us by the voters. The continued silence of the Board majority on this issue is a slap in the face to those who voted for them. We would not expect or tolerate this from our state legislators or Congresspeople. When one takes a vote representing the interests of one’s constituents, one should defend it. Why should local government be any different? The simple answer is it shouldn’t.

Why did the majority vote to reject the transgender policy, but at the same time leave racial bullying/harassment and religious accommodation policies on the books? If the argument is that everything is protected under state law, then why do we have any policies that talk about protected classes? Why do we have a policy book at all if everything could be covered by state and federal law? This question, among several others, continues to be unanswered.

At the September 6, 2022 meeting, Chairman Ferris accused me of diminishing “the mental health of the kids.” Not only do I wholly refute this, but I would argue that the silence and “no” votes of the majority are harming the mental health of our kids. Representation and awareness of our unique characteristics are important to showcase. This has been a personal mission for me as a member of the Board of Education and is exactly what this policy does.

The Chairman further said that I was “violating the Board’s ethics policy.” I find it highly unusual and unbecoming of the chairman of any board to declare that a member was violating the ethics policy of a body in a public meeting without allowing that member the appropriate due process to defend such an accusation. If that statement was a foreshadowing of a complaint being brought forward, I very much look forward to defending my words, actions, and votes.

Chairman Ferris also said that I acted in an “unprofessional and unethical” manner. If anything comes from this, I hope our students are able to learn that no matter what names people may call you we must always speak up whenever we see an injustice and fight for it fervently. Sometimes people may call you names, but we must continue to fight on the face of adversity.

The Chairman also stated we have to “move on.” This is an insult to all of those who fought for passage of this policy. For some students and parents, this is their everyday life, it is not sufficient to simply “move on” when there has been no discussion as to why this policy was voted down. There was no statement in support of our LGBTQ+ students. There was no statement in support of our LGBTQ+ staff or teachers. I do not understand why our Board cannot stand up and support our LGBTQ+ community. I hope the students and parents who are directly affected by this policy hear the Chair’s comment and use it as a call to keep this issue alive and to keep fighting.

The New Haven Board of Education adopted this policy and called it “life-saving” and discussed the impact that this policy could have. In the time that we spent discussing this policy, Waterbury, Hartford, Amity, and Norwich all adopted it in addition to dozens of other districts who had already had it in place. Although a district may exist where this policy was defeated, I have yet to find one.

What is most striking about the majority’s refusal to comment and close their eyes to our LGBTQ+ students is that our students have told us there is a problem. Isn’t it the responsibility of government to act when a problem is identified? In a November 2019 survey conducted by the Making Caring Common Project of Harvard University’s Graduate School of Education, approximately 5% of Masuk students surveyed did not prefer to say what their sexual orientation was, approximately 75% said they were heterosexual, and approximately 20% said they were something other than heterosexual (questioning, lesbian, gay, bisexual, another). This tracks perfectly with Gallup’s February 17, 2022 poll that shows 1 in 5 members of Generation Z identify as something other than straight. In the 2021 follow up Masuk climate survey, 72.1% of 687 student respondents said they had witnessed examples of LGBTQ+ discrimination. 96.4% of those who witnessed LGBTQ+ discrimination did not report it.

Even after all of this, the Board majority said nothing. And continue to say nothing and take no action. Their year long silence is deafening.

We are a broken Board. We have a singular committee that meets rarely. If we look to neighboring school districts, there is a robust committee structure and substantive debate on issues affecting the school district – unfortunately, not here in Monroe.

At the Pride Flag raising on June 11 a parent and child came up to me and told me that they attend Monroe public schools. The parent asked me what happened, this should’ve been something that was a slam dunk in our part of the country. I answered that I couldn’t say because there was no discussion. After some more words with them, the student looked at me and said “there’s nothing wrong with me, so why don’t they like me?” And I have heard that over and over again throughout the summer and I don’t have a good answer to that question.

With great sadness, but continued love for my hometown and hope that things can improve in the very near future, I resign my seat on the Monroe Board of Education effective immediately.