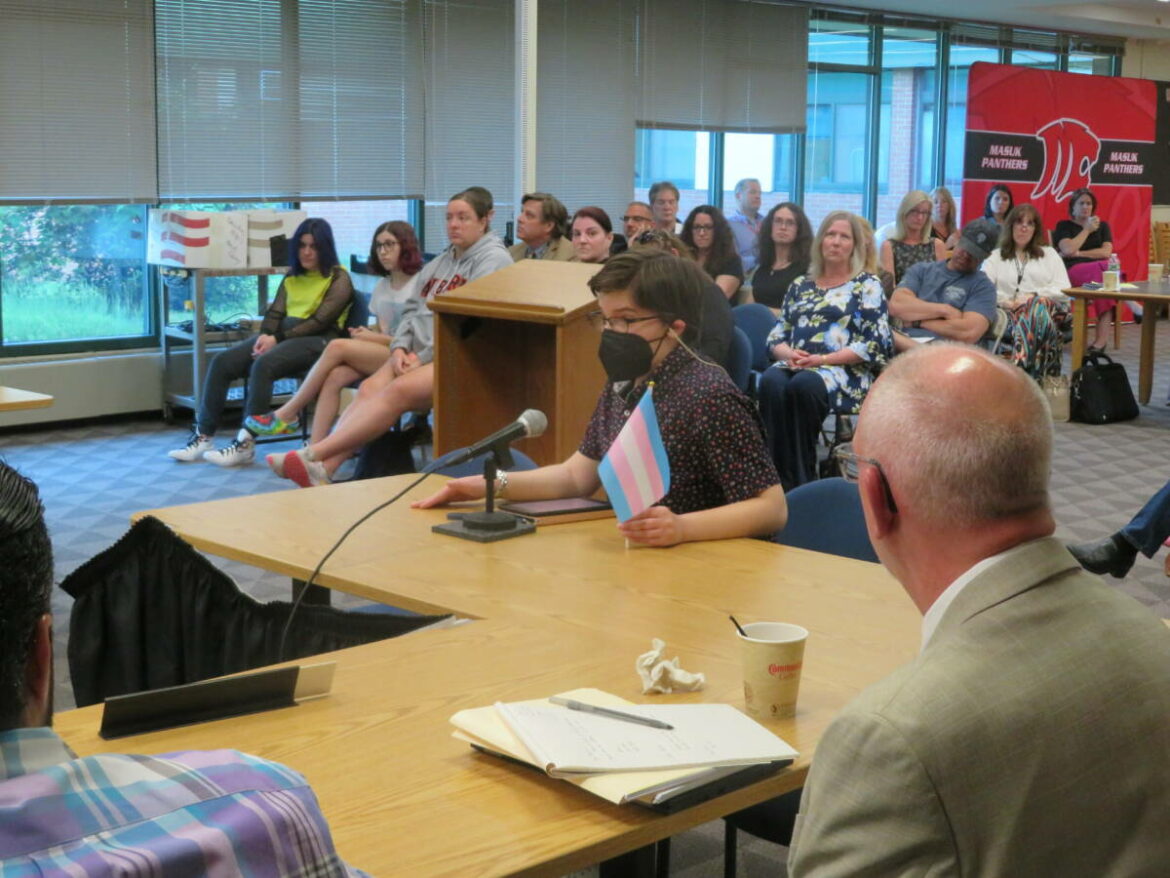 Mandy Wall, whose pronouns are they/them/theirs, speaks in favor of a new Transgender and Gender Non-Conforming Youth Policy during the Board of Education meeting Monday night.

Among members of the public, the proposal sparked passionate debate on both sides of the issue. Proponents stressed the need for a support system for transgender and gender non-conforming students and spoke about an alarmingly high rate of suicidal thoughts these students have.

Opponents of the policy expressed concerns over the fairness of girls’ sports and the safety of girls sharing bathrooms with students born as biological boys. Some argued that adequate policies are already in place to ensure all students are safe.

Kapoor, who is a member of the Board of Education, contends that the current policies are not enough.

“Imagine waking up and looking in the mirror,” Kapoor said in a statement before the vote. “You know that you see you, but the image staring back at you isn’t the true you. Imagine for a moment knowing something about you that other people might think is ugly or wrong or a mental illness and attempting to deal with that in silence … as a child.”

“This is my story and it is the story of hundreds of thousands of children across our country every day,” said Kapoor, who is gay. “I’d now like you to imagine your child having to look in the mirror and see someone that they don’t identify with and adding all the pressures of what it means to be a child or young adult in 2022 on top of that – it almost seems unbearable.”

While Monroe may not be ready for a new policy, Kapoor predicted a future school board will adopt one some day, look back and wonder why the current board did not.

“I understand that society is changing and change can be scary,” he said. “Things we don’t know about can be scary, unfamiliar, and uncomfortable, but that doesn’t mean we don’t take them head on. It is to better society and make us more inclusive for the betterment of all.”

Kapoor introduced the proposal nearly a year ago, before it came to the full board for a discussion and vote on Monday. Kapoor and fellow Democrat, Dr. Alan Vaglivelo, spoke in favor of the policy, though no other comments were made.

Jerry Stevens, a Democrat, joined Kapoor and Vaglivelo in voting in favor in the 6-3 defeat. 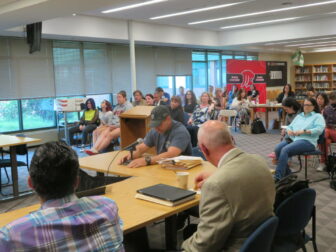 Gary Corigliano, a resident, expresses his opposition to the adoption of a Transgender and Gender Non-Conforming Youth Policy during the Board of Education meeting Monday night.

In the lead up to the vote, both Kapoor and Vaglivelo expressed frustration over the lack of public comments from board Republicans on the issue.

“I would just like to hear from the other side,” Vaglivelo said. “If people are opposed to this, I think they owe the public a conversation.”

In his comments before the vote, Kapoor claimed he reached out to all board members, encouraging conversations and expressing an openness to compromise, without getting a response from the other side of the aisle.

After the meeting, Ferris said he could not say why fellow board members did not comment on the policy proposal.

“I can’t speak for any of the individual no voters,” he said. “It’s not a vote against transgender students. There are parents on this board with children in the LGBTQ+ community. I think everyone has their personal reasons.”

Without sharing specific details for his own decision to vote no, Ferris said, “I wasn’t in favor of this specific policy, but I’m open to resolving some issues that come up in the future.”

Ferris said the door is “not slammed shut” on the issue.

During the meeting, Superintendent of Schools Joseph Kobza was pressed for his views.

“Wherever we go with this, I respect the board’s decision,” Kobza said before the vote. “I think it’s important that our students know that this community supports them. We have True Colors, which supports the LGBTQ+ community and students in the process of transitioning.”

“Our school social worker worked with Masuk staff on inclusivity,” Kobza said, adding administrators discussed having neutral bathrooms. “We have a parent-teacher group that promotes inclusivity. No matter what the board does tonight, we will continue to support our kids.”

Ferris agreed that the district has always been supportive of its transgender and gender nonconforming students. “I agree with and support the inclusiveness,” he said. “This board has not said no to anything, and that will continue.”