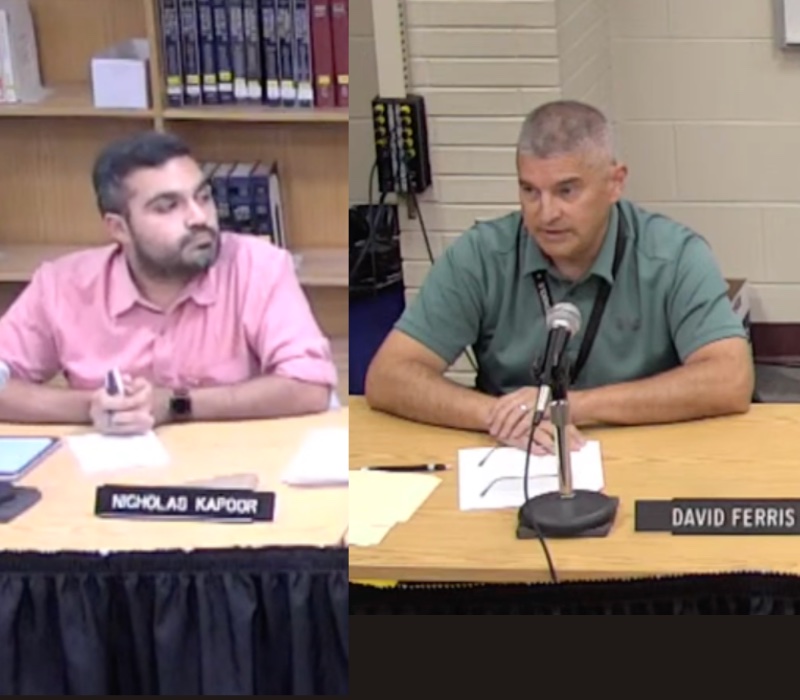 Nick Kapoor, a school board member, left, listens as Chairman David Ferris responds to his comments at Tuesday's meeting.

MONROE, CT — Board of Education member Nick Kapoor, who is a Democrat, continues to criticize the board’s Republican majority for a June 6 vote against the adoption of a Transgender and Gender Non-Conforming Policy for Monroe’s public schools, a vote that was taken without comment.

This led to a heated exchange during the public comment portion of Tuesday’s board meeting, after Kapoor questioned the board’s inaction on the issue since June 6 and pressed Chairman David Ferris over comments he made to The Sun following the vote.

Kapoor said a parent and student approached him at the Pride Flag raising on June 11 asking why the board voted no. He said the student said to him, “there’s nothing wrong with me, so why don’t they like me?”

“I have heard that over and over again throughout the summer and, unfortunately, I still can’t provide an answer to that question,” Kapoor said.

“We are not broken,” he continued. “We are solid in our support of this district. And you further damaged the mental health of all these kids by telling them that we don’t care about them — and this is completely unacceptable. It is unprofessional and you are in violation of our ethics policy. We need to move on for the benefit of this district.”

The following is Kapoor’s statement made during public comment:

The decision of this board from June 6 continues to reverberate throughout the community and I’d like to address some of the comments made and questions I still have from that vote.

Kapoor read Ferris’s quotes in The Sun article about the no vote, in which he said, “I can’t speak for any of the individual no voters. It’s not a vote against transgender students. There are parents on this board with children in the LGBTQ+ community. I think everyone has their personal reasons.”

Without sharing specific details for his own decision to vote no, Ferris said, “I wasn’t in favor of this specific policy, but I’m open to resolving some issues that come up in the future.”

Ferris said the door is “not slammed shut” on the issue.

During Tuesday’s public comments Kapoor went on to say:

First, it was precisely a vote against transgender students, with no one from the opposition side willing to speak to the motion, how else could it be interpreted?

Second, If it is true that there are parents on this board with children in the LGBT+ community, wouldn’t you have wanted to take the opportunity to explain why you would vote against the interests of your own children?

No member of the majority has contacted me since June 6 in any way about this policy and how we can move it forward together. The door seems to not only to be slammed shut, but locked with the key thrown away.

And so I’d like to ask, what is the plan moving forward? Our students have told us in survey data that there is a problem and I thought a way to begin this, at least at the board level, would be the DEI Committee, but it has been hung up in Policy for 15 months with no movement.

I will continue to press for a vote on that committee and at the full board level in the months to come. There are a list of questions I posed over a 12 month period that, to date, have yet to be answered.

And if you wanted to vote no, that is completely up to you. But I will continue to ask these questions at every public participation until there is some kind of resolution or discussion on the merits of the policy, which still has yet to happen. The parents, and most importantly the students who spoke in favor of it, deserve at least that much.