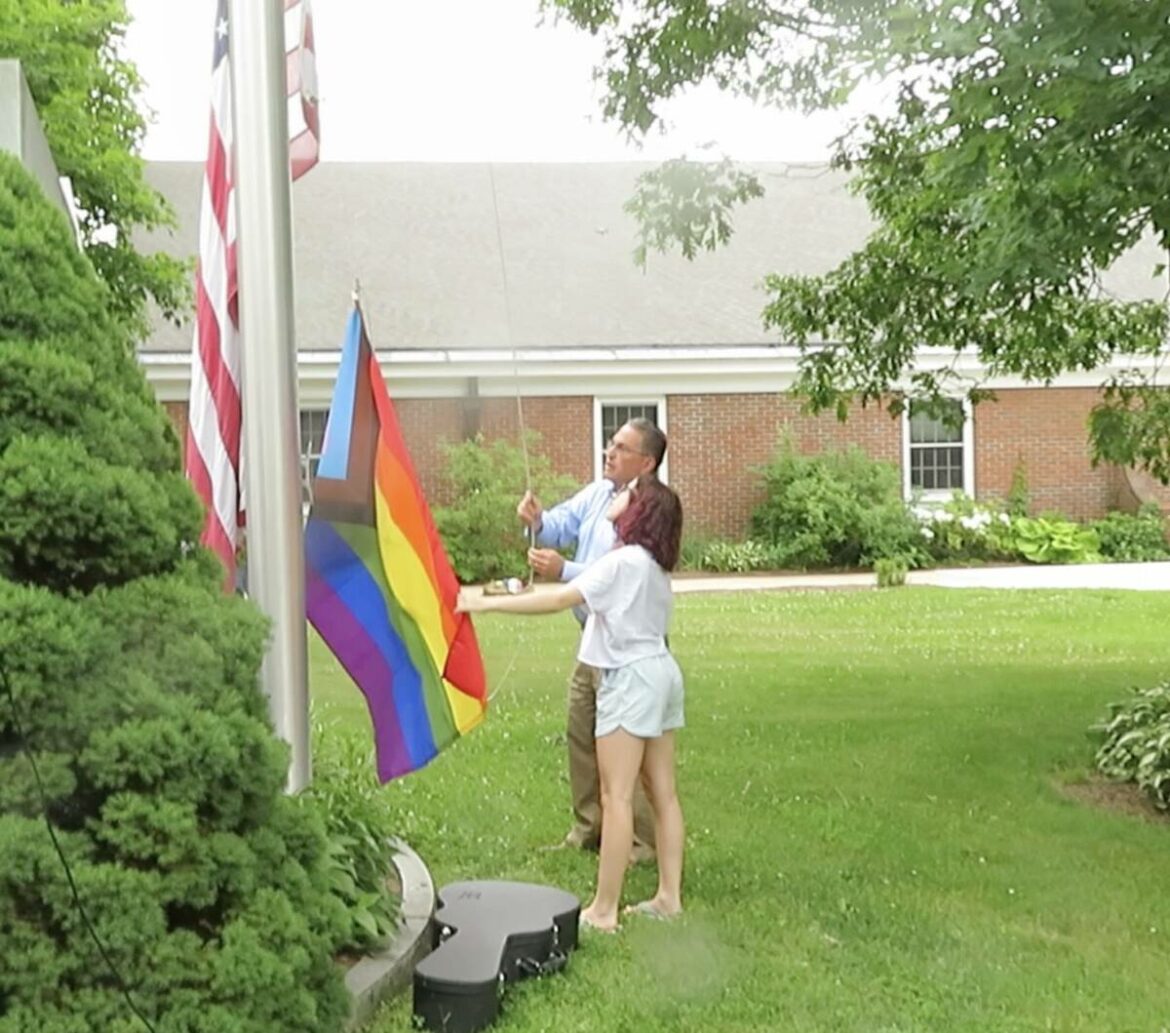 Chymbor-Souza was also a featured speaker, sharing her story of growing up with two mothers and of how it gave her a unique perspective on diversity and inclusion. 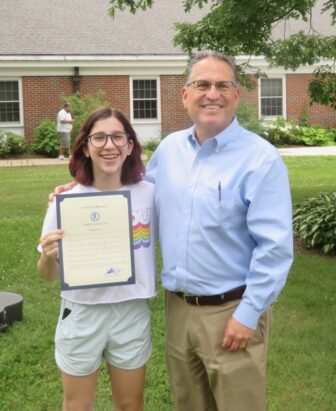 “I learned from an early age that nothing is just black or white, but a multitude of different colors,” she said from behind the microphone. “I learned not to judge others based off of my idea of perfect, but most importantly I learned how to help and support other people in the LGBTQIA+ community.”

Chymbor-Souza said many of her peers are not able to be vocal about who they are.

“Many of them walk through life with only a select number of people truly knowing who they are,” she said. “Keeping a part of yourself secret from others is awful and no adult, let alone kids, should have to go through that. I’m fortunate. I know I am. I have a family and community who supports me.”

“I’m here because I hope we can all be a community with LGBTQIA+ friends and family,” Chymbor-Souza said. “I hope this Pride Month we can focus on supporting our LGBTQIA+ youth in this town. We need them and they need us.” 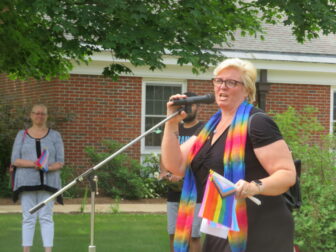 The Rev. Jennifer Gingras, pastor of Monroe Congregational Church, speaks to the crowd during the Pride Flag Raising at Town Hall Saturday.

Nick Kapoor, who serves on the Board of Education in town, organized Monroe’s third annual Pride Flag Raising. The event started with a Moment of Reflection from The Rev. Jennifer Gingras, pastor of Monroe Congregational Church.

“At Monroe Congregational Church, we want every person who identifies as LGBTQIA+ to know this: you are beloved by God,” she said. “God created you perfectly. Your gender identity or expression, who you choose to love, is God’s gift to you and the world. No earthly power can separate you from God’s love.”

Gingras expressed concern over the high rate of suicidal thoughts among LGBTQIA+ youth. “The lives of LGBTQIA+ people are precious,” she said. “You are God’s beloved children created for a life free from hatred and recrimination. We offer you our encouragement, support and our love today. We honor your courage and faith. We will be by your side.”

The reverend also had a message for allies of the LGBTQIA+ community. 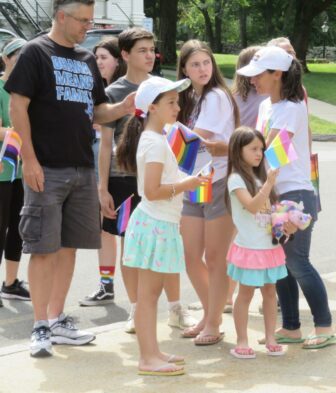 “This is a time to love, not behind closed doors, but out in the open with our words and our actions,” Gingras said. “Your visible witness helps those who feel vulnerable know they indeed have a home here in Monroe.”

Among the speakers was First Selectman Ken Kellogg, who read a proclamation recognizing June 11 as Pride Day in Monroe and presented it to Chymbor-Souza.

“I’m grateful to say that Monroe is a welcoming community and that we reject prejudice and injustice,” Kellogg said. “I’m proud to say that Monroe not only celebrates the LGBTQIA+ community, but honors and respects the fundamental freedoms that our country is founded upon. Today, we celebrate the right of every individual to simply be who they are and to love by simply following their heart.”

“One thing I really want to call out is, today is a great symbolic day that we’re going to raise the flag,” Scott said. “June is a great symbolic month to celebrate what’s happened, but this should be 365 days a year. We need to have that everywhere, every day, every household.”

Scott challenged everyone at the ceremony to do their part to make that happen. 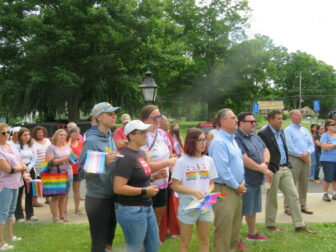 Among the town officials in attendance were a few Board of Education and Town Council members, Superintendent of Schools Joseph Kobza and Assistant Superintendent Jack Ceccolini.

Ceccolini brought his guitar and played Bob Dylan’s song, “Blowin’ in the Wind”, because he said it symbolizes how we know what’s right and the answers are right there in front of us, but like the wind, we can’t get our arms around it.

Tanya Hughes, executive director of the Commission on Human Rights and Opportunities, CHRO, was a special guest at Saturday’s ceremony. 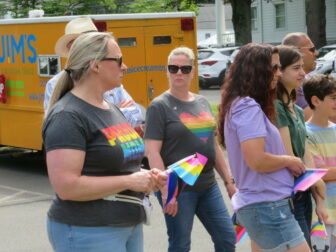 She shared the poem, “Myself” by Edgar Guest, which her grandfather recited at all of her family’s holiday get-togethers, because Hughes said it speaks to the spirit of Pride.

Janice Persico, whose son is transgender, told the crowd how he was struggling with it and had to be taken to Yale Children’s Hospital last year.

“He had run out of hope. It was a tough time,” Persico said. “A silver lining of that short stay at Yale is that he and myself realized that we aren’t alone. Since that time a year ago, we have tapped into the love and support of the LGBTQIA+ community and I’ve met several local moms who are on the same journey as me, and together we are planning to help our community from the grassroots up.”

She encouraged everyone to share their stories and to continue to advocate for the support of Monroe’s LGBTQIA+ youth.

Colors of the flag 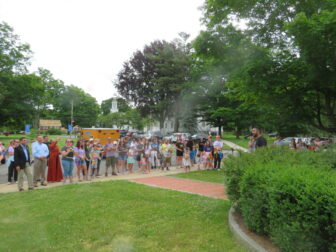 Nick Kapoor talks to the crowd at the Pride Flag Raising Saturday.

Kapoor shared the history of the Pride Flag and the meaning of its colors.

Of the six remaining colors, Kapoor said red means life, orange is healing, yellow is sunlight, green is nature, blue is harmony and violet is spirit.

“In 2018, artist Daniel Quasar created the Progress Pride Flag we’re going to raise today,” Kapoor said, “and it includes stripes for our trans brothers and siblings, the blue, white and pink.”

Kapoor noted it also has black and brown for those communities and the black stripe also represents those living with the stigma of AIDS and who we’ve lost to AIDS over the many decades.

“The black and brown and trans stripes are in the rightward direction to show … the whole movement is moving forward and we are on our way to progress,” he said.