Masuk pitcher Kat Gallant winds up for a pitch, while tossing a 4-0 shutout against North Haven Wednesday.

The top-seeded Panthers had a bye in the first round and No. 17 North Haven was coming off a 3-1 win over No. 16 Rockville in eight innings of their first round clash. Masuk advances to host No. 9 St. Joseph in the quarterfinals on Friday.

The Panthers jumped out to a 1-0 lead in the first inning when Izzy Viglione singled and Gallant doubled home the game’s first run. 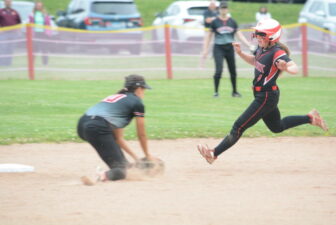 Gallant worked around a two-out hit in the top of the second inning to maintain the lead. Masuk could not add to it in the bottom half of the frame. Sarah Falcone hit a full-count pitch single to right and stole second base with one out, but was stranded.

Gallant struck out the side in the third and Masuk scored twice in the bottom of the inning.

Natalie Lieto swung at the first-pitch and clocked the ball off the left field fence for a leadoff double. After Ella Bunovsky bunted her over to third, Viglione smashed an RBI double to the left field corner. Gallant again supported her own cause with a run-scoring single to center field to make it 3-0. 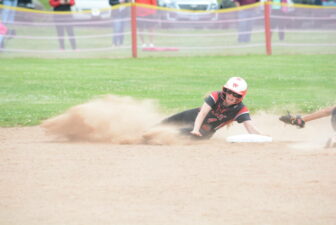 North Haven was set up to get back into the game in the fourth thanks to a leadoff two-base error, a one-out hit, and a runners on second and third with just one out situation. However, Gallant struck out the next two batters to escape and preserve the shutout.

Masuk tacked on another run for the 4-0 victory.

The Panthers will look to defeat St. Joseph for the second time this season, having won a 2-1 nail-biter on the road in Trumbull on April 21.