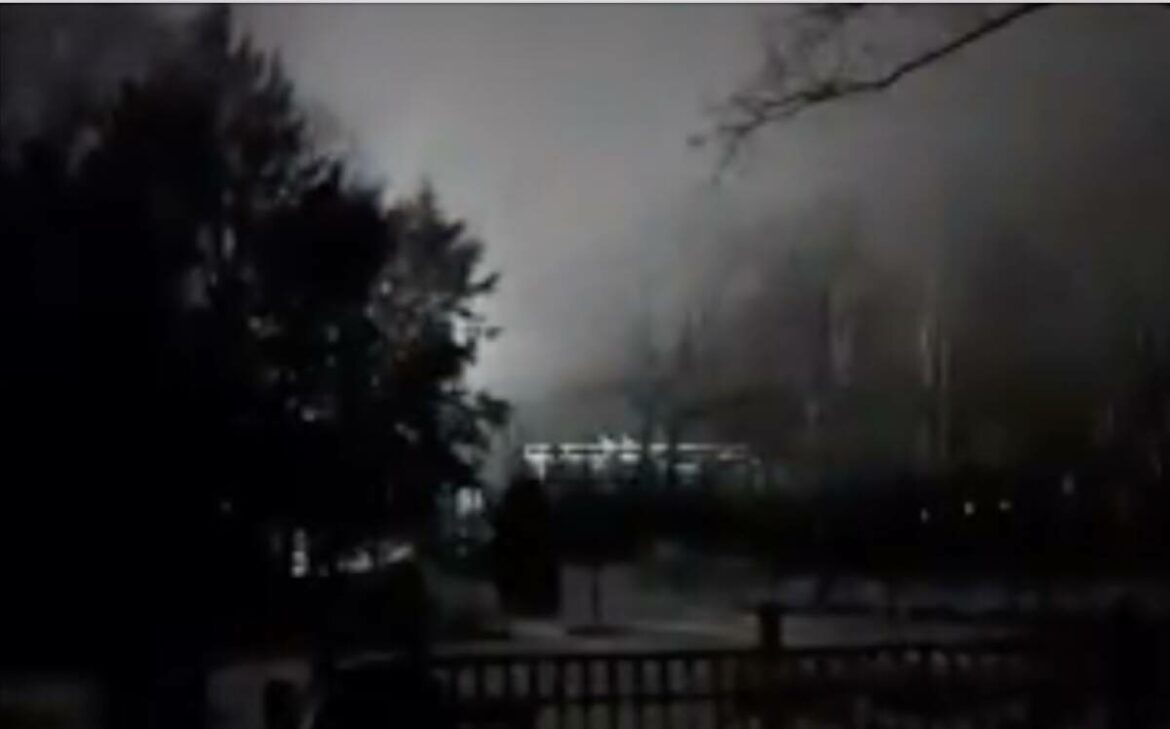 This is a screenshot from a video of the Fan Hill Road substation posted online.

MONROE, CT – Homeowners experienced an unusual phenomenon twice in the past month when the power went out. Kitchen appliances, TV’s and other electronics kept turning on and off every few seconds for hours at a time, making noises for functions to reset whenever the power came back on.

Then on Monday night, many homes experienced the flickering power again – this time without a buzzing sound. A number of residents complained of damaged electronics after the incident.

“Personally, I turn off most of my breakers to avoid destroying any electronic equipment, before heading out for fire calls,” Catalano said.

On Monday night, Catalano manually opened his garage and drove to the firehouse. Along the way, he said lights on half of Monroe Turnpike blinked on and off, including traffic lights, the McDonald’s arches and other business signs.

“It seemed like a science fiction movie,” he recalled. “I’ve never seen anything like that in my life before last month, highly abnormal.”

Catalano and other firefighters took a ride to the substation on Fan Hill Road to monitor it and make sure there were no hazards.

“We had a crew standing by in case there were electrical issues at houses,” he said. “The substation was banging for two hours. We thought it was explosions with flashes. When it stopped we left.”

Mitch Gross, a spokesman for Eversource, said a tree fell on wires on Route 111 near Old Coach Road, cutting the power to the substation and affecting 2,000 customers.

But that does not explain why the power kept switching on and off, twice in the last month. The Sun asked if there is a problem with the substation.

“The substation does not need repairs – it is functioning as it should,” Gross said. “We believe the issue is one device at that substation called an automatic switch. Its name describes exactly what it is supposed to do – automatically switch power from one circuit to another, if necessary.”

He noted there are multiple switches at the substation. Gross said the switch issue slowed down the power company’s ability to move the affected customers to another circuit.

“As you know, some of our Monroe customers experienced the on-off power issue on February 8 when one automatic switch did not operate properly,” Gross said. “As to why it did not – we continue to look at a number of possibilities – was it moisture that somehow got into the switch causing an internal part to stick? There was freezing rain and ice in the area that day. Was there a manufacturing defect that contributed to the problem?”

“We have substation workers, engineers and a representative of the switch manufacturing company all trying to determine why it happened,” he said. “In the meantime, the problem switch is off line and will remain off line until a cause is determined – then repairs will be made.”

On Tuesday, First Selectman Ken Kellogg reached out to residents explaining what had happened the night before.

“Some residents have asked about potential damage to electrical equipment in their homes,” he said. “Please understand that to open and investigate a claim, Eversource must hear from their customers directly. We’ve been advised that all claims must start with a call to Eversource Customer Service at 800-286-2000.”

However, rather than starting with Eversource, on Wednesday Gross said, “we recommend customers first contact their homeowners or renters insurance policy carriers.”

3 thoughts on “Did a faulty switch at the substation cause the buzzing, blinking …?”