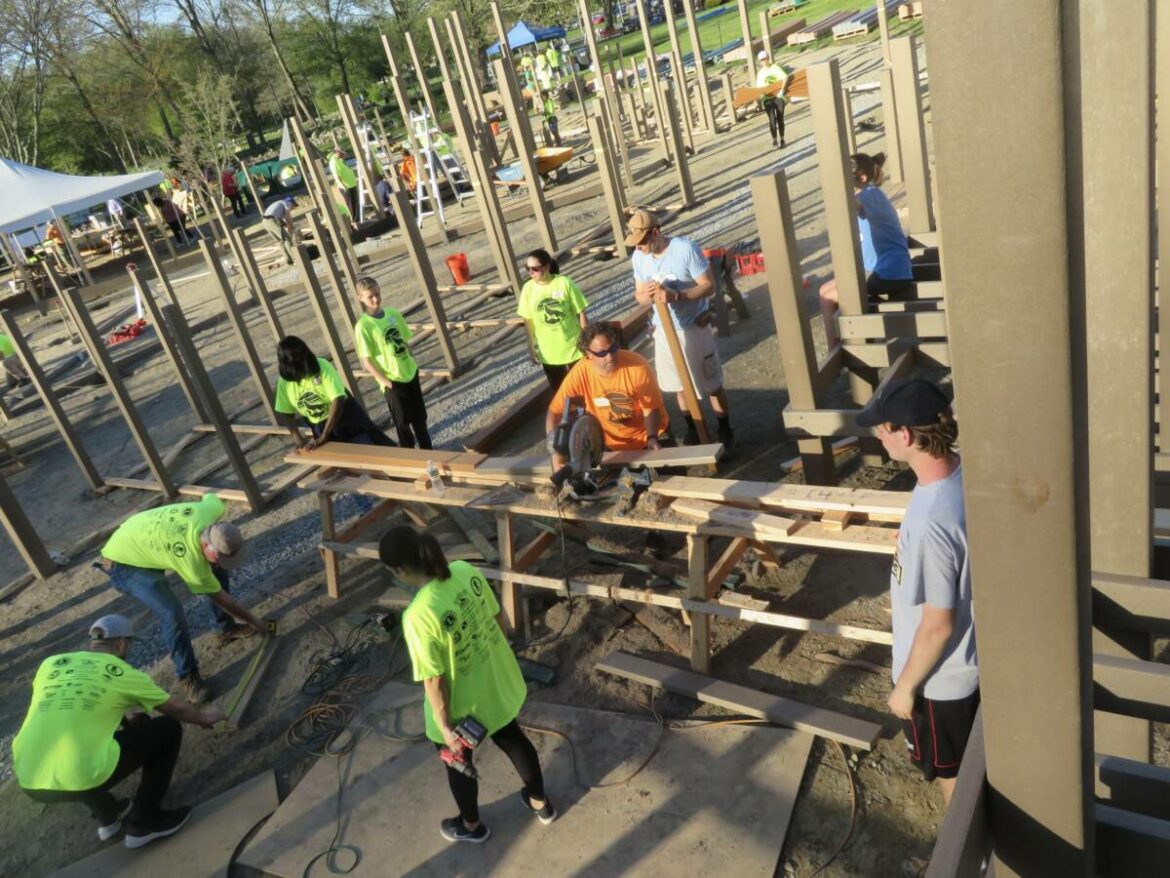 The community build for The Wolfe's Den playground at Wolfe Park will embark on its fourth day Friday.

MONROE, CT — A network of ramps on the construction site at Wolfe Park shows the Monroe Playground Foundation’s commitment to building a playground that’s inclusive for children of all abilities. The Wolfe’s Den now has decks, platforms and a giant aluminum structure for swings.

On Thursday evening, day three of a community build by volunteers for the project, Dan Keene, chairman of the nonprofit, marveled at the size of its components. 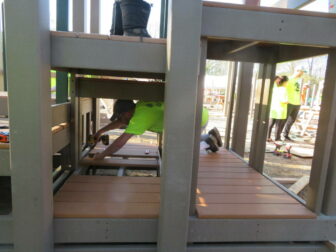 “I’ve been doing this for four years,” he said. “The picture doesn’t do it justice. The tree house in the upper right hand corner of the picture is 14 feet tall. The 3-D rendering doesn’t show you the immense scale of this playground.”

Keene checked out the platforms at various heights, as well as a fire truck that’s about the size of an actual fire truck.

“I believe this is the Castle Hideout,” he said of one tall structure being built. “It’s inspired by The Castle on Route 111. This playground is uniquely Monroe.” 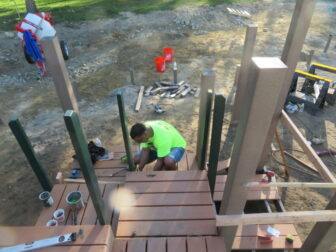 Outside the construction area, Josh Sternthal, an MPF board member, used a remote control to fly a drone over the site, taking aerial photos to capture the big picture of the playground’s overall progress. The six-day-build is expected to wrap up by Sunday night.

All are welcome to volunteer as much time as they want. Work is being done daily, from 8 a.m. to 8 p.m. Breakfast, lunch and dinner is being served and there is a tent near the Rotary Pavilion to supervise young children.

Keene encourages volunteers to bring tools if they have them. “We need drills. We need impact drivers and routers,” he said.

The Wolfe’s Den, which will replace the wooden Kids Kreations playground, was designed by Leathers & Associates with input from town children. Val Saltzman, a parent, won a contest to name the playground, coming up with The Wolfe’s Den. 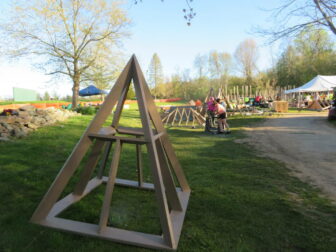 Leathers & Associates has led community builds, in which volunteers build their town’s playground, for over 50 years. Two of its construction consultants trained 12 captains for Monroe’s playground and each captain leads construction teams.

“It’s not other people building this,” Keene said. “It’s the Monroe community. It doesn’t matter if you never touched a tool in your life. We’ll find something for you to do. People volunteer here and they come back.”

Among the volunteers working Thursday was Doug Fink, a father of two grown children who has been helping out since site prep weekend.

“You’re going to be able to say, ‘I made this,'” Fink said of volunteering. “This is like an old fashioned barn raising.” 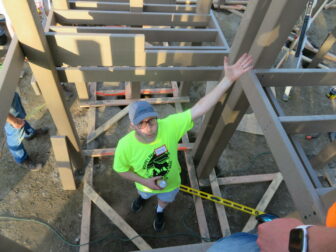 Doug Fink has been volunteering from the beginning.

“At the end of the day, this playground will exist because the Monroe townspeople built it,” Keene said. “I challenge every parent to be part of that team.”

Anyone who wants to help can show up during construction hours, sign in at the check-in table, pull on a green T-shirt, and be assigned to a team.

A Slideshow shows the progression of the playground 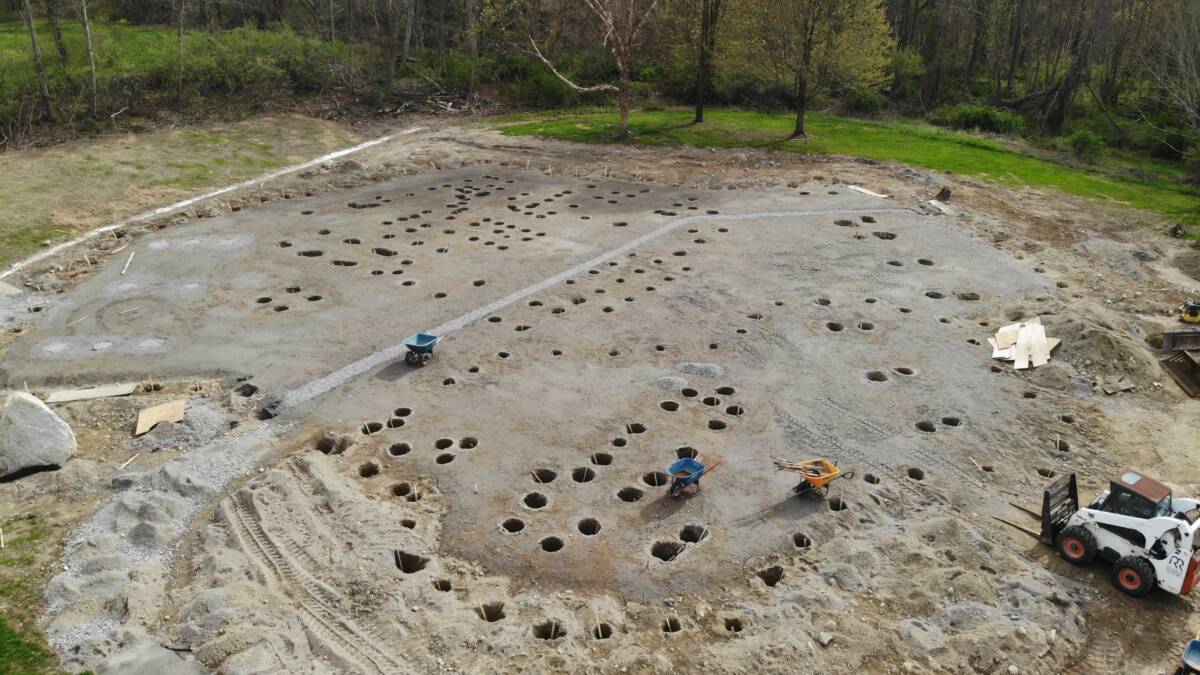 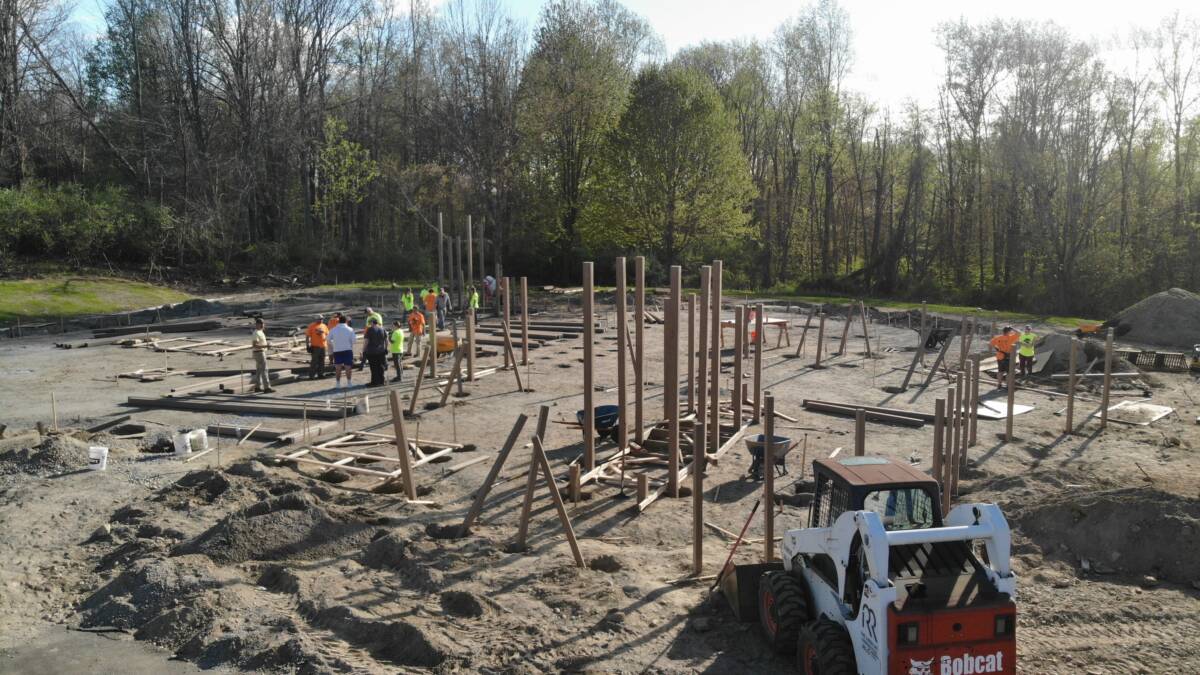 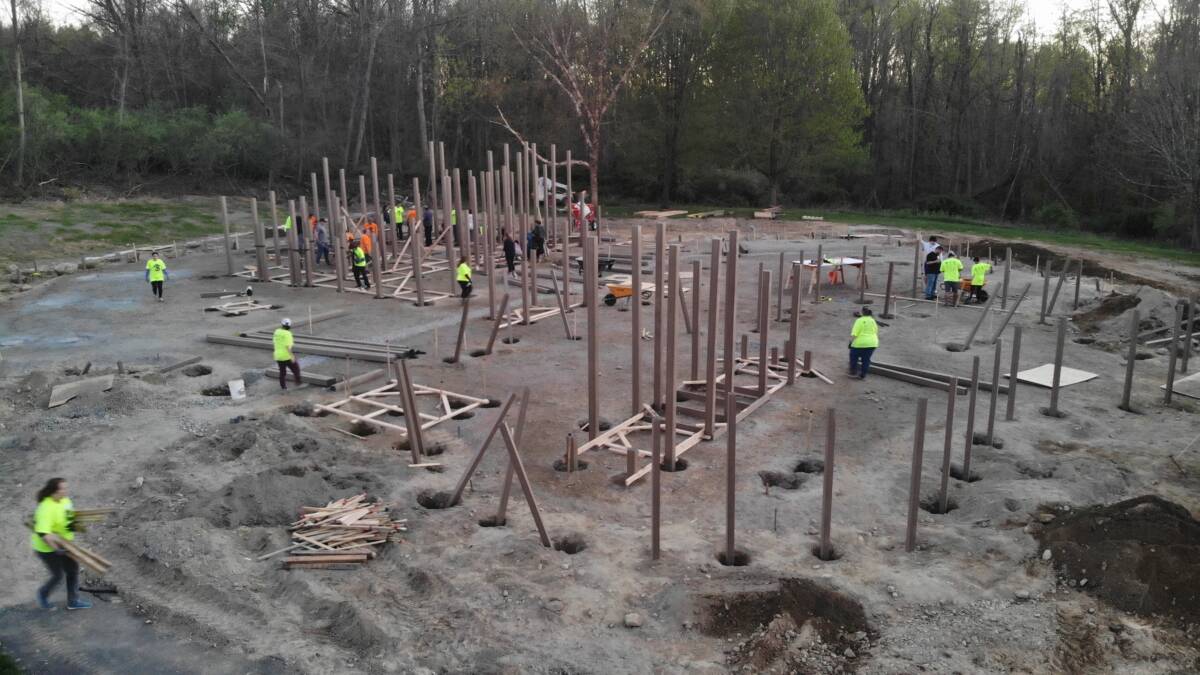 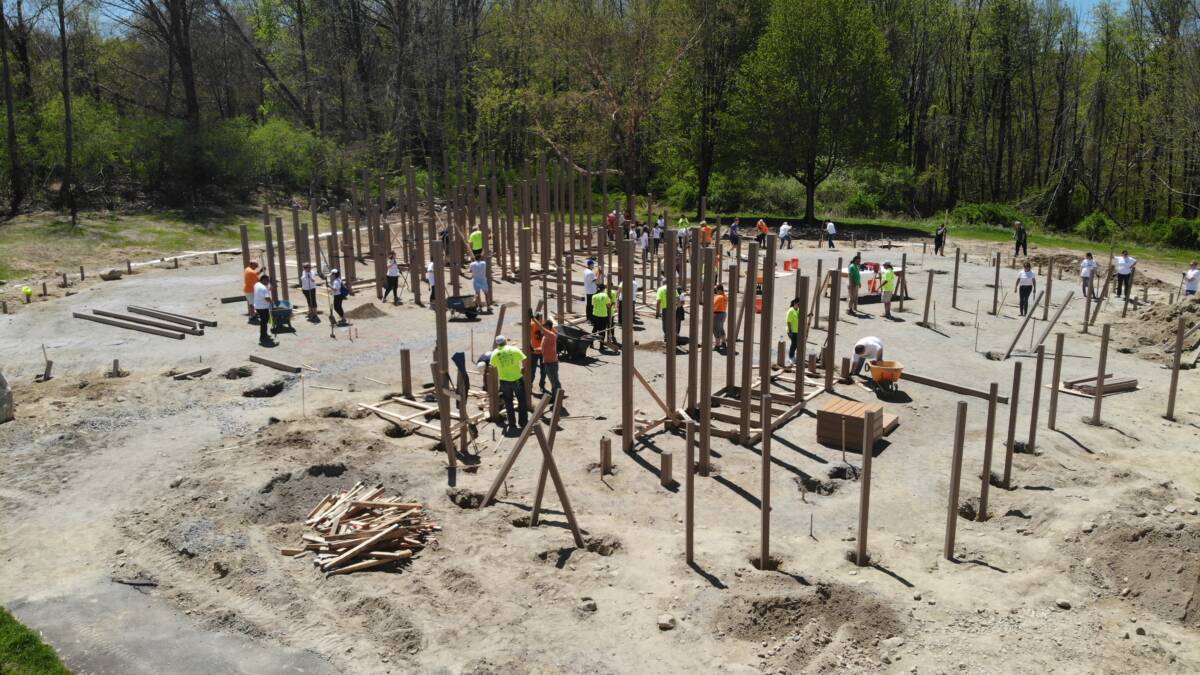 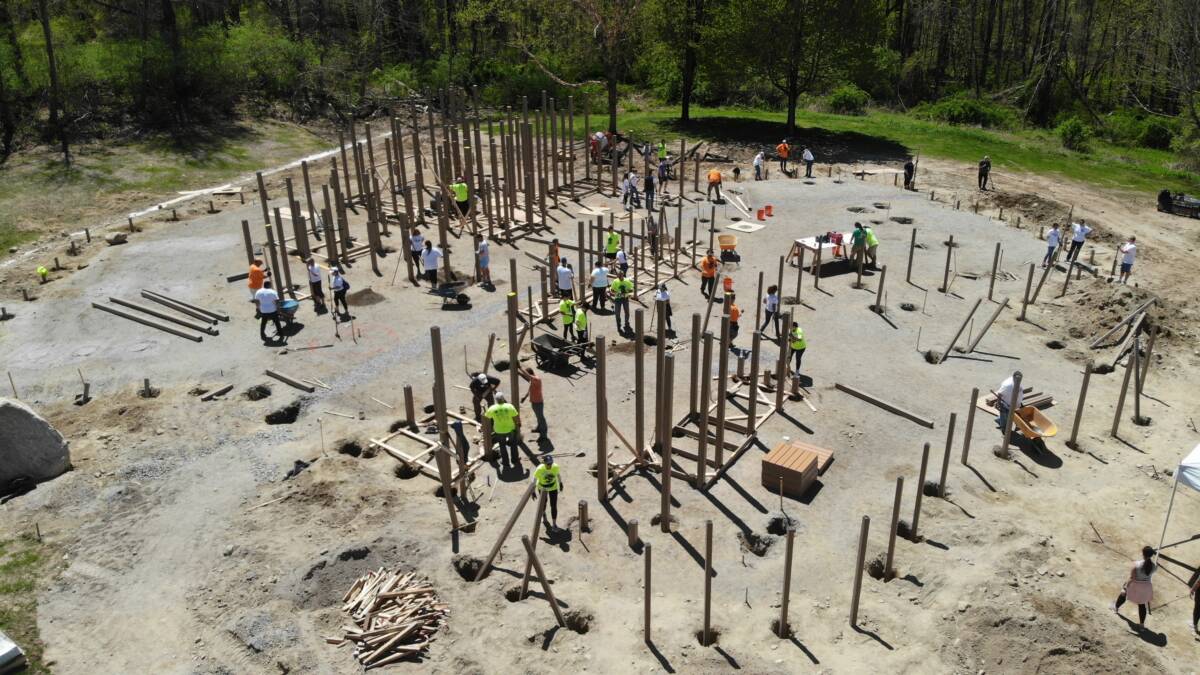 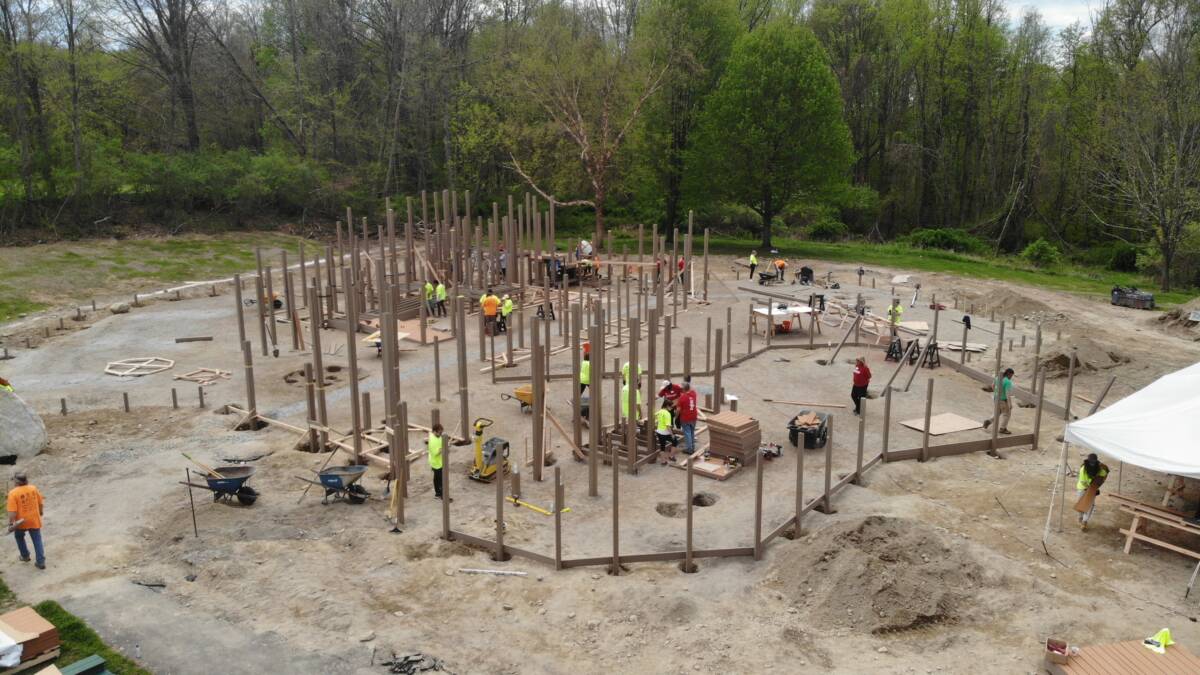 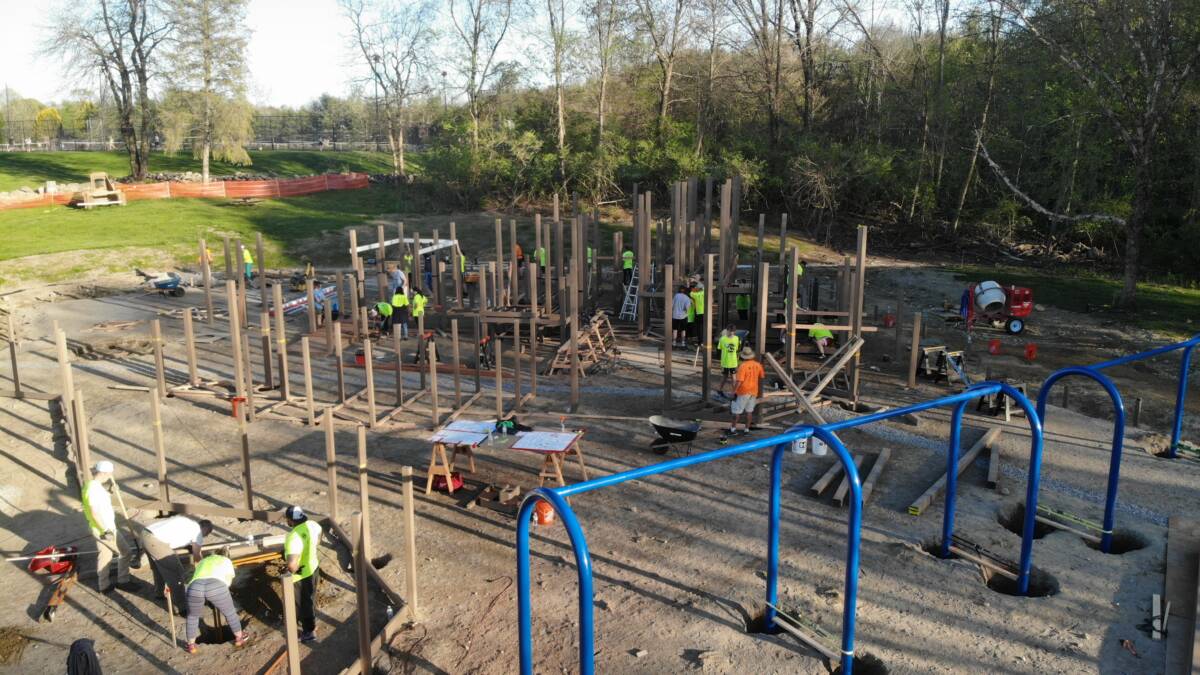 One thought on “Day 3: The Wolfe’s Den playground is emerging on a massive scale”