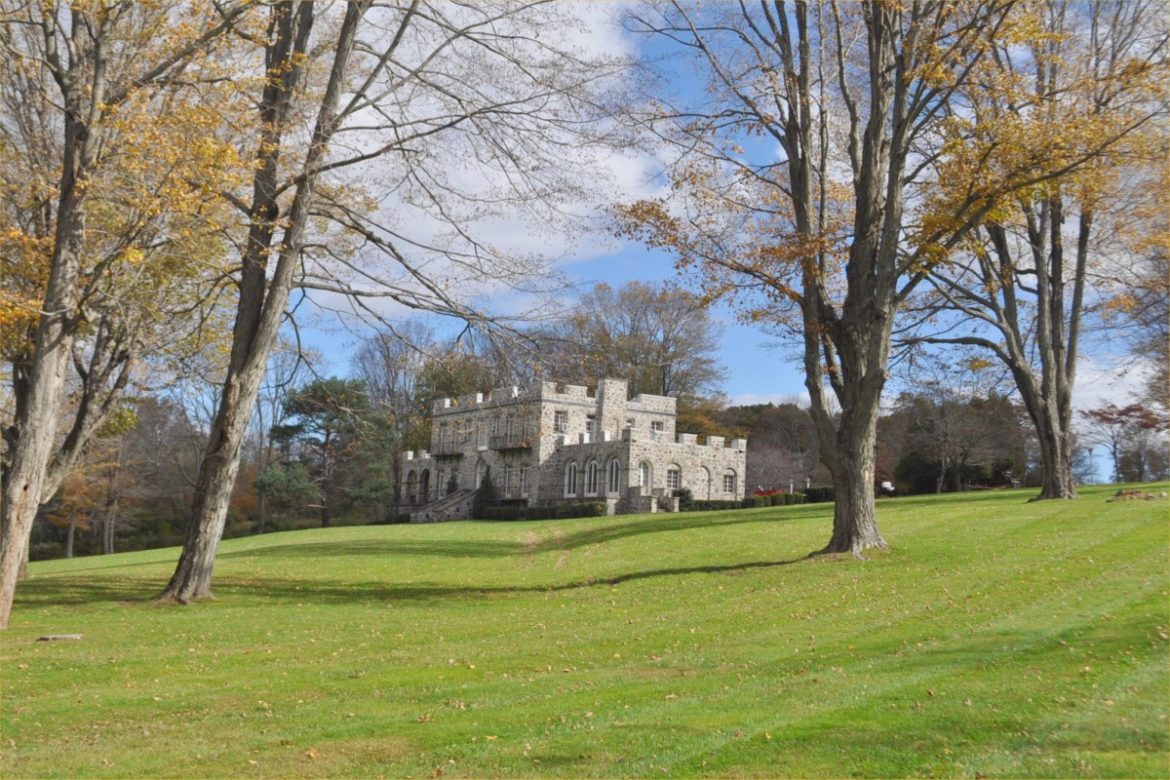 Before Kimball and her husband, well-known developer John Kimball, converted The Castle into their home and offices seven years ago, the couple saved it from the wrecking ball.

“My wife and I have an affinity for restoration projects,” John Kimball said Sunday. “Our family is very happy to have saved it, and restored it, and brought it back to life. And I’m sure the next family will put their finishing touches on it. We’re both excited to see what that will be. Having a hand in saving a property like that is a once in a lifetime experience.” 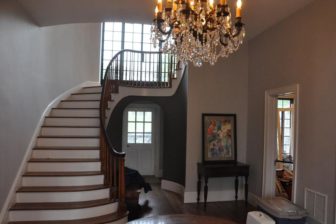 The Castle’s winding staircase and ornate chandellier are among its unique features.

Guys, who owns Glitter Craze, an arts and crafts store at 301 Main St. in Ansonia, with his wife, Tammy, did not return phone calls seeking comment on the purchase.

Seven years ago, the aging population of the Sisters of Nazareth could no longer afford to maintain the stone building, which had a leaky roof, and obtained a demolition permit to tear it down. Kimball said he worked with Marven Moss, a local journalist with an interest in history, to come to an agreement with the nuns and save the old building. 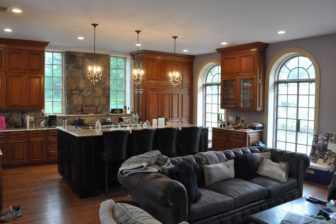 The Kimballs converted The Castle’s chapel into their kitchen and family room.

“He spent an unspecified amount of money refurbishing The Castle,” Moss said of Kimball. “The end result was a magnificent living space. It has a fabulous wine cellar and a basement with a Dutch oven, and he refurbished the whole castle and redid the wiring.”

Kimball had also planned to have a vineyard, but he said he could not get the necessary land use approvals for the venture. 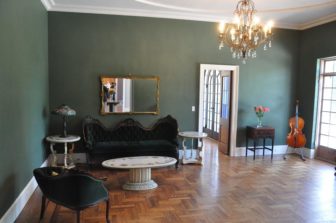 One of The Castle’s rooms after renovations.

The Kimballs converted the chapel to their kitchen and family room. They also admired the attention to detail in the way the castle was originally built. Kimball said the fireplaces are inlaid with rose quartz from a mine off Barn Hill Road, which is now owned by the town. There are also Freemason symbols throughout the house.

Aside from its unique features, The Castle may have also held some sentimental value for the Kimballs, who lost their eight-year-old daughter Susan in a tragic zip-line swing accident in 2009. “Susan remarked that she wanted to live in The Castle,” Kimball said of what his daughter had once told his wife years ago.

The Kimballs have another daughter, Elizabeth, 10, and a son, Jack, who recently 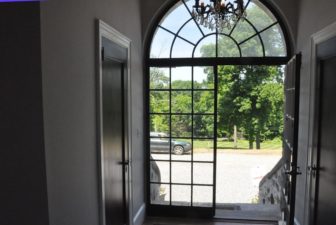 A view to the outside.

graduated from the University of Connecticut. John and Jill were living in The Castle with Elizabeth.

“We knew how big the house was, but it was way bigger than our family needed,” John Kimball said of their reason for selling. “It was just the three of us. We were literally living in a third of the house.”

‘The Bernie Madoff of his day’ 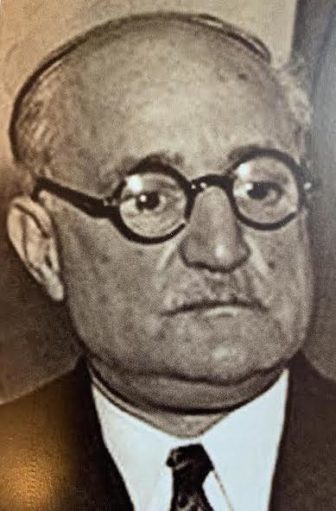 Phillip Musica is known as the Bernie Madoff of his day for a life filled with money-making schemes.

The Castle is attached to legacy of Phillip Musica, who the Monroe Historical Society’s book “Monroe Through Time” describes as “the Bernie Madoff of his day.”

Musica, who went to jail twice for fraud before World War I, lived in Fairfield under the alias Dr. F. Donald Coster, where he assumed control of McKesson and Robbins. His brother, who used the alias Robert Dietrich occupied the castle, according to “Monroe Through Time.”

Musica was born in Italy, where his father had a barber shop. There, Musica collected sweepings of hair clippings off the floor, claimed it was quality hair, and sold it for wigs, according to “Monroe Through Time.”

He later went to jail in the U.S. in the early 1900s, because he was importing cheese from Italy and getting it short weighted, so as not to pay the duty on the cheese. He had bribed the customs inspectors, enabling him to undercut his competitors, according to the book.

After he was out of jail, Musica was doing well under his alias before running into trouble once again.

“It was subsequently revealed that the family bilked the banks out of millions of dollars against fictitious inventory and accounts payable,”  according to “Monroe Through Time.” “When the scam was uncovered, Musica fatally shot himself at his Fairfield residence a few days before Christmas of 1938.”

A fire at The Castle

Davie Dewey Trompeter, an eccentric industrialist and inventor, acquired the mansion in the 1940s. His wife Lisa Roma, was an operatic soprano and publisher of the national magazine, “The Musical Courier.” Trompeter bought his wife “a store sized collection of fur coats,” which were lost in a fire at The Castle in the 1950s.

“It is town lore that a dispute of some kind with the town so angered Trompeter that he gave away The Castle for one dollar to the religious order,” the Sisters of Nazareth in 1963, “which ostensibly pays no taxes,” according to “Monroe Through Time.”

The sisters opened Marian Heights Academy, a parochial girls’ school for aspiring nuns, from 1968 through 1980, and lived in a convent on the property.

Years later, Kimball said the nuns did not want to tear down The Castle, but simply could not maintain it. He said they agreed to the sale, but wanted to remain on the property.

Kimball Group built a new convent with a 32-seat chapel, incorporating the seven large stained glass windows from the original chapel. It allowed the nuns to downsize with a one-story building that met all of the modern building codes.

“We built them a new home on top of the hill,” Kimball said. “It had 28 bedrooms and we were actually able to repurpose the stained glass from the chapel.”

In addition to putting original windows in the new chapel, Kimball said 28 stained glass windows were set aside, so one could be installed in each bedroom.

A day of tours 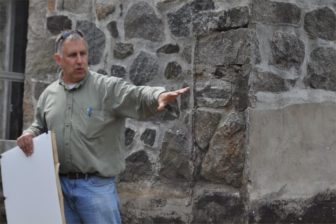 John Kimball leads a tour of The Castle.

While enjoying life at The Castle, the Kimballs also shared its rich history with others.

Moss had helped to produce “Monroe Through Time.” When it was published, Kimball erected a large tent on his property for a Monroe Historical Society fundraiser, where copies of the books were sold and guests toured The Castle.

“The Castle is just one of a number of projects that John Kimball took an interest in to enhance life in the community,” Moss said. “He was really a public spirited guy.”

Moss expressed his hope that The Castle’s legacy lives on for years to come.

“I think The Castle is part of Monroe’s living history and it’s a landmark that people ‘ooh’ and ‘ah’ about as they drive by on Route 111,” he said. “It’s very visible from the road to people passing through town.”

2 thoughts on “The Castle, a town landmark with a colorful history, is under new ownership”