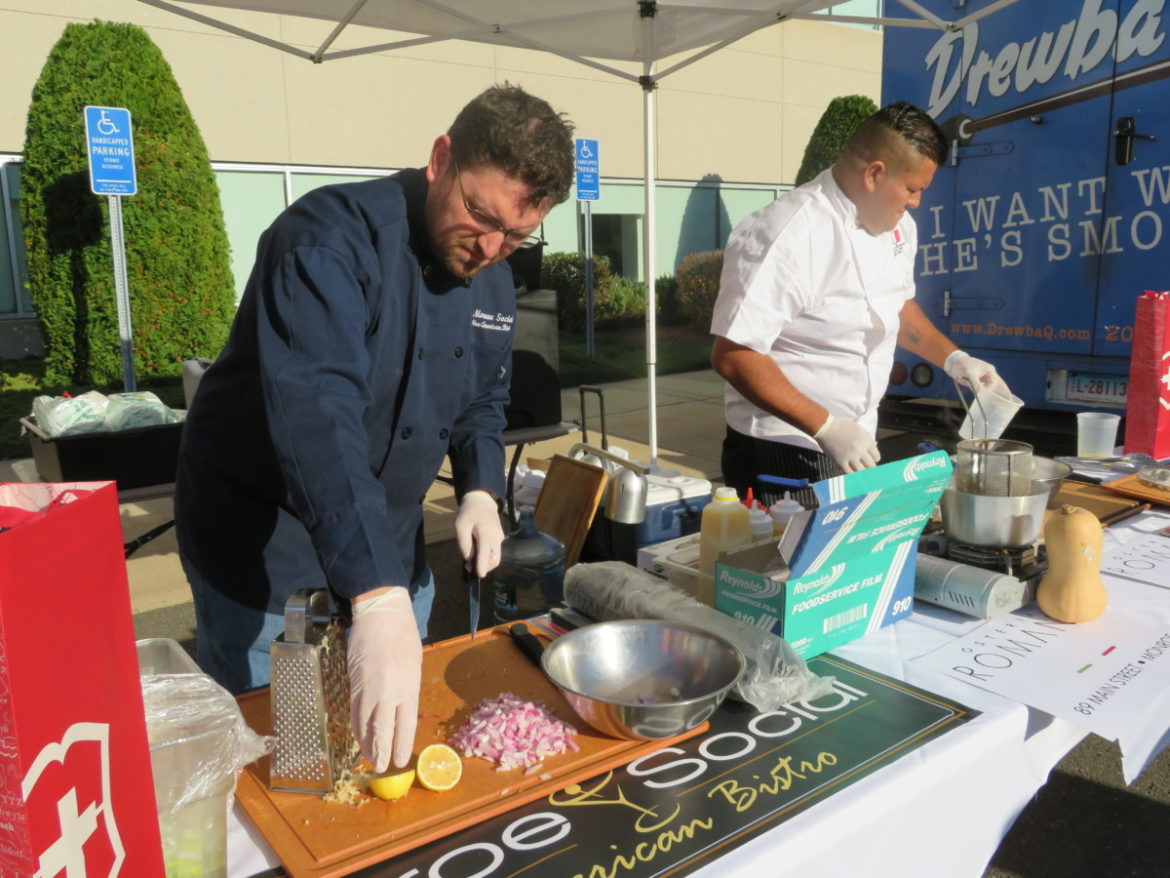 Eric Felitto, a Fairfield chef who appeared in the “Breakfast Battle” episode of the Food Network’s TV show “Chopped” last year, was among the celebrity chefs at a Monroe Restaurant Week event at Victorinox Swiss Army’s headquarters in Monroe Thursday afternoon. 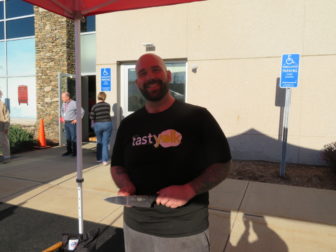 “I brought meat to make The Banker Sandwich,” Felitto said. “It’s named after my business partner, who was a financial advisor for Fairfield County Bank. It has braised brisket, two eggs, Swiss cheese and a spicy aioli served on a Parker House bun from the Bronx.” 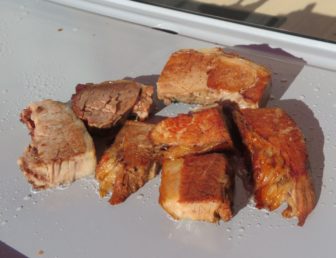 Braised brisket cooks on the griddle for The Banker Sandwich, which also includes two eggs, Swiss cheese and a spicy aioli on a Parker House bun from the Bronx.

Felitto, owner of The Tasty Yolk, said it is his most popular breakfast sandwich. He recently opened a restaurant at 2992 Fairfield Avenue in Bridgeport and had three food trucks that go to 1916 Post Road in Fairfield, Brookside Drive and Mill Plain Road in Fairfield and 4700 Park Avenue near Sacred Heart University. A fourth truck caters for parties.

Thursday’s event was the second one promoting Monroe Restaurant Week, which is going on until this Sunday. Around 26 participating restaurants and eateries are offering special prix fixe menus and discounts. For restaurants and special menus, click here. 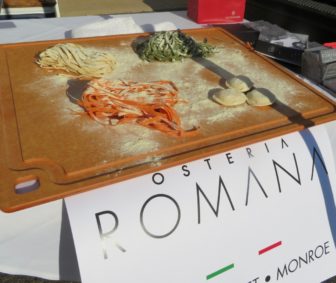 Jamie Zuniga, the chef for Osteria Romano, made fresh pasta during the Celebrity Chef event at Victorinox Swiss Army Thursday.

“Our residents are coming out to learn more about the kind of diverse restaurants we have in our town,” said Ray Giovanni, chairman of the EDC.

He praised the restaurants who participated in the two promotional events, which are new this year. “It speaks to the character they have and support for the town of Monroe,” Giovanni said.

Rachel Olivera, marketing manager for Victorinox Swiss Army and a Monroe resident whose husband Herman serves on the EDC, said, “we were happy to partner with the Monroe Economic Development Commission to put on an event during Restaurant Week and bring some awareness to our factory store.”

Among the food venders were Dave’s Mobile Planet Pizza truck, owned by Dave Kuban. It can normally be found at 607 Main Ave. in Norwalk. DrewbaQ, a barbecue restaurant in Trumbull, also had a truck.

Little Kernel’s Kettle Corn and Victorinox Swiss Army had tents, and Think Pink Monroe, which is raising breast cancer awareness throughout October, had a table, along with the Monroe Playground Foundation, which is promoting the project to upgrade the Kids Kreation Playground at Wolfe Park. 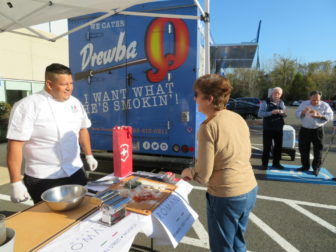 Beside Crama, Zuniga, of Osteria Romano, prepared flour for his pasta maker. He was making a butternut squash ravioli.

Veronica Condon, of Monroe, had stopped to talk to him.

“We went Monday night for Restaurant Week and I had the chestnut ravioli,” she said. “They were amazing. They were so delicious. The first time we went to Osteria Romano was two years ago, when my brother was visiting. He went to restaurants all over the country, around the world, in New York City, and he said this is the best Italian restaurant he ever went to.”

While Condon knows what she likes, Blanca Wake, a substitute teacher for Monroe public schools, and her husband only moved to town from Glastonbury last August. She said, “I’m considering trying some of the restaurants, learning about the town and seeing what it has to offer.”