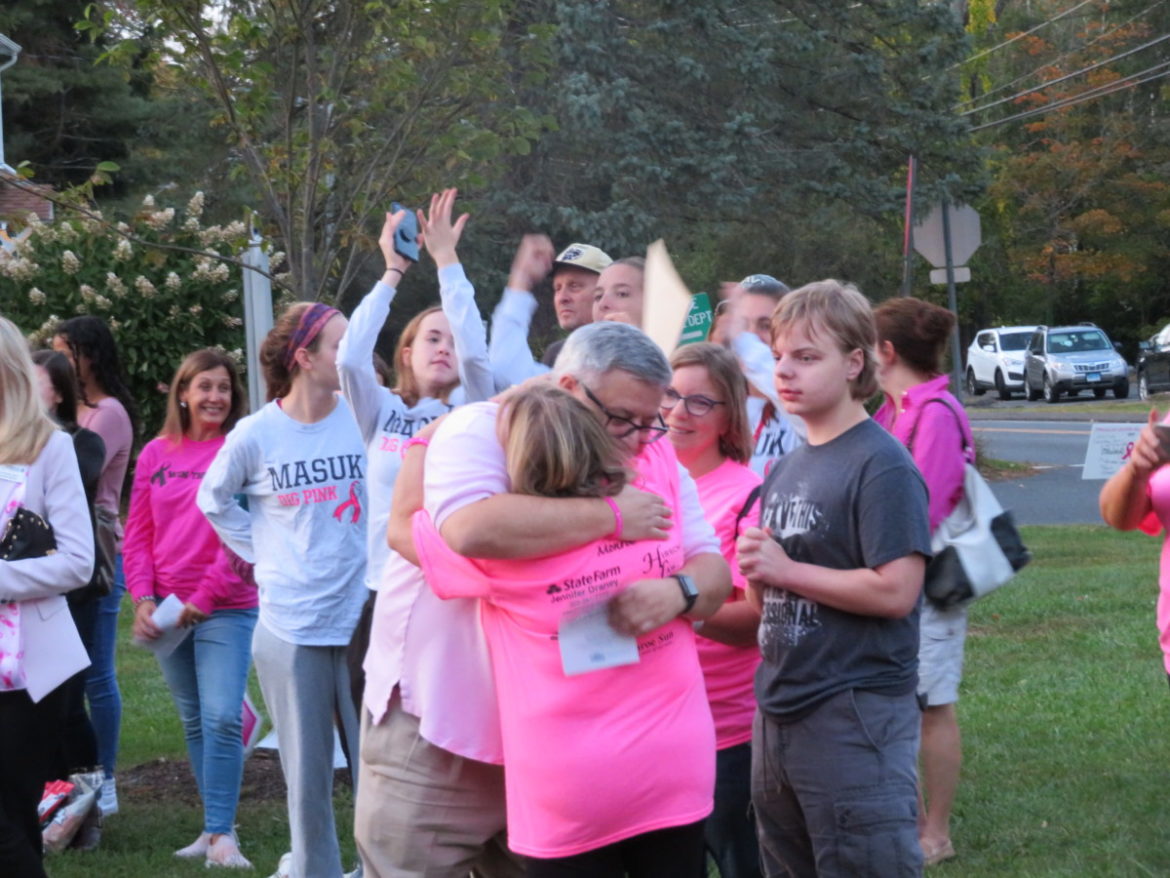 A large crowd gathered around the Gazebo on the Monroe Town Green Tuesday evening for the first annual Think Pink Palooza. Lamp posts and the gazebo were festooned with pink ribbons, lights and plastic pink flamingos.

Bonnie Maur, a longtime educator in town and a breast cancer survivor, formed the Think Pink Monroe Committee and teamed up with St. Vincent’s SWIM Across the Sound to raise money and awareness of breast cancer with events like this one throughout the month of October.

Speakers at the event stressed the importance of regular mammograms and of not putting off going to the doctor when something does not feel right.

“My mom is a 27-year-survivor because of early detection,” Patti Kallas said, adding the first doctor her mother went to told her it was nothing.

Kallas’s sister-in-law was not so lucky. When she thought something was wrong with her health, Kallas said her sister-in-law’s doctor told her to “keep an eye on it,” and when she was finally tested, she had stage four cancer. Kallas lost her sister-in-law at age 49.

Kallas, who is a Think Pink Monroe committee member, said she has had multiple biopsies herself, but was clean every time. “Your insurance may not cover it, but you’re worth it,” she said. “I’m worth it.”

David York, the town’s emergency management director, gave the invocation at the Think Pink Palooza event, which honored breast cancer survivors and included a moment of silence to honor those who bravely battled the disease before losing their lives.

Though the vast majority of breast cancer cases affect women, men can get it to, as Robert Primorac of Monroe found last year.

“It was an early catch, but it was an aggressive tumor,” Primorac recalled. “We are blessed to live in an area with some of the best cancer treatment in the world.”

Primorac said those who are diagnosed with breast cancer should take their time in researching doctors and facilities to come up with the best team they can to fight it. 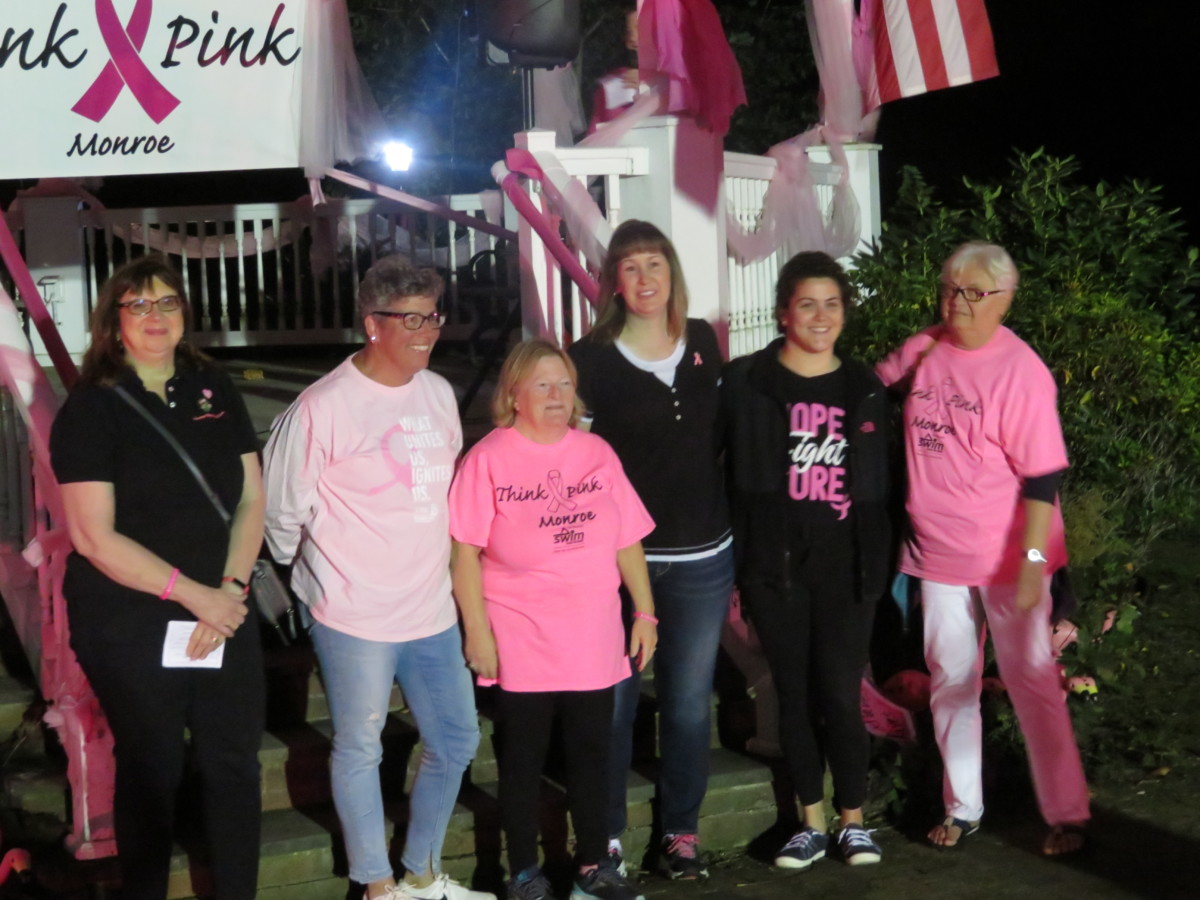 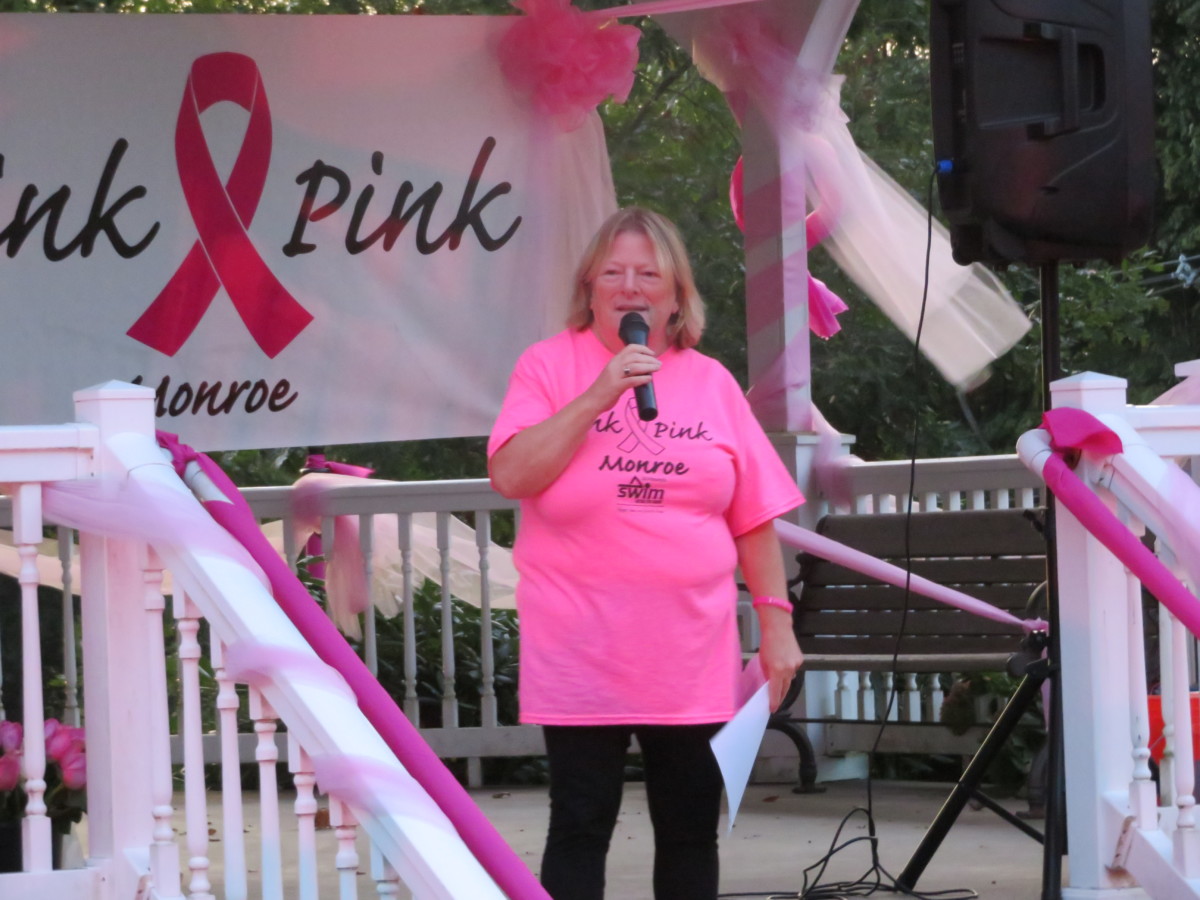 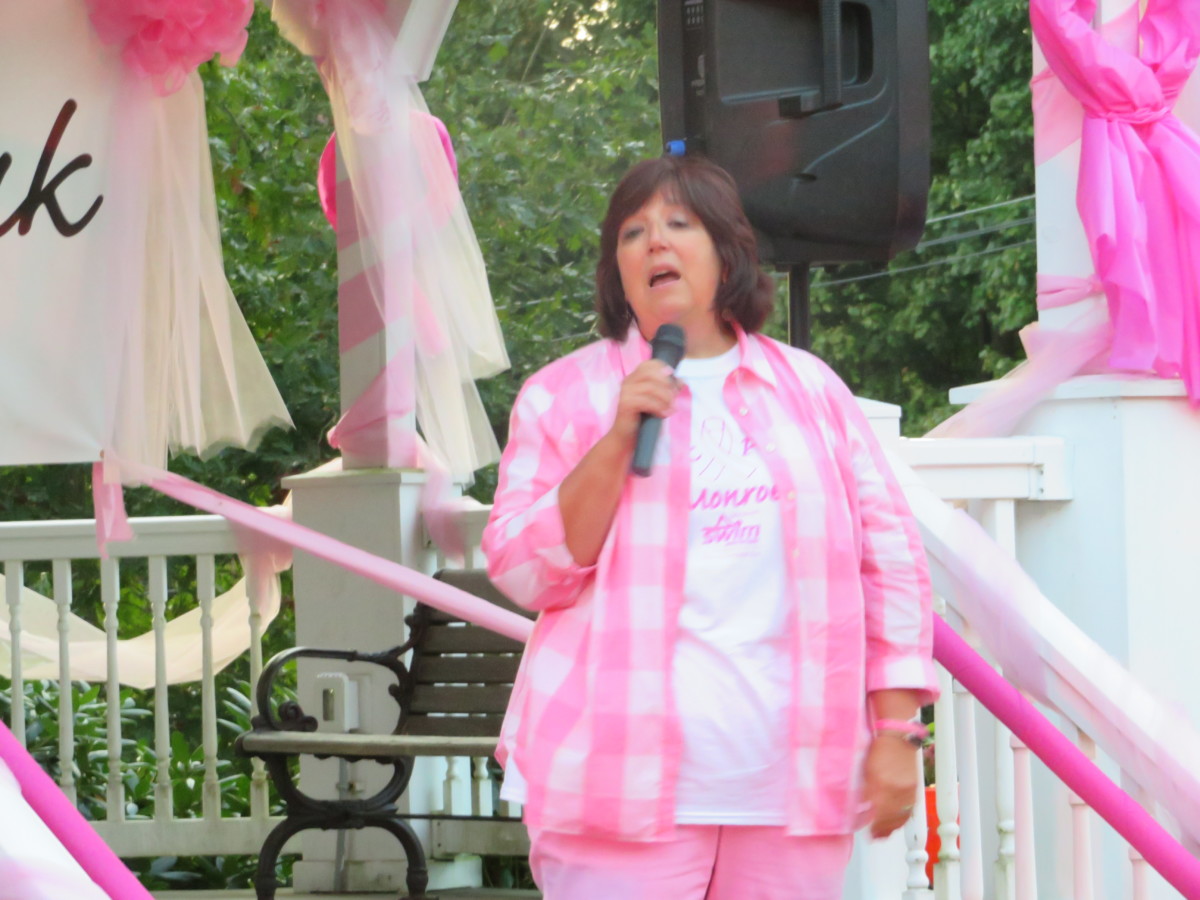 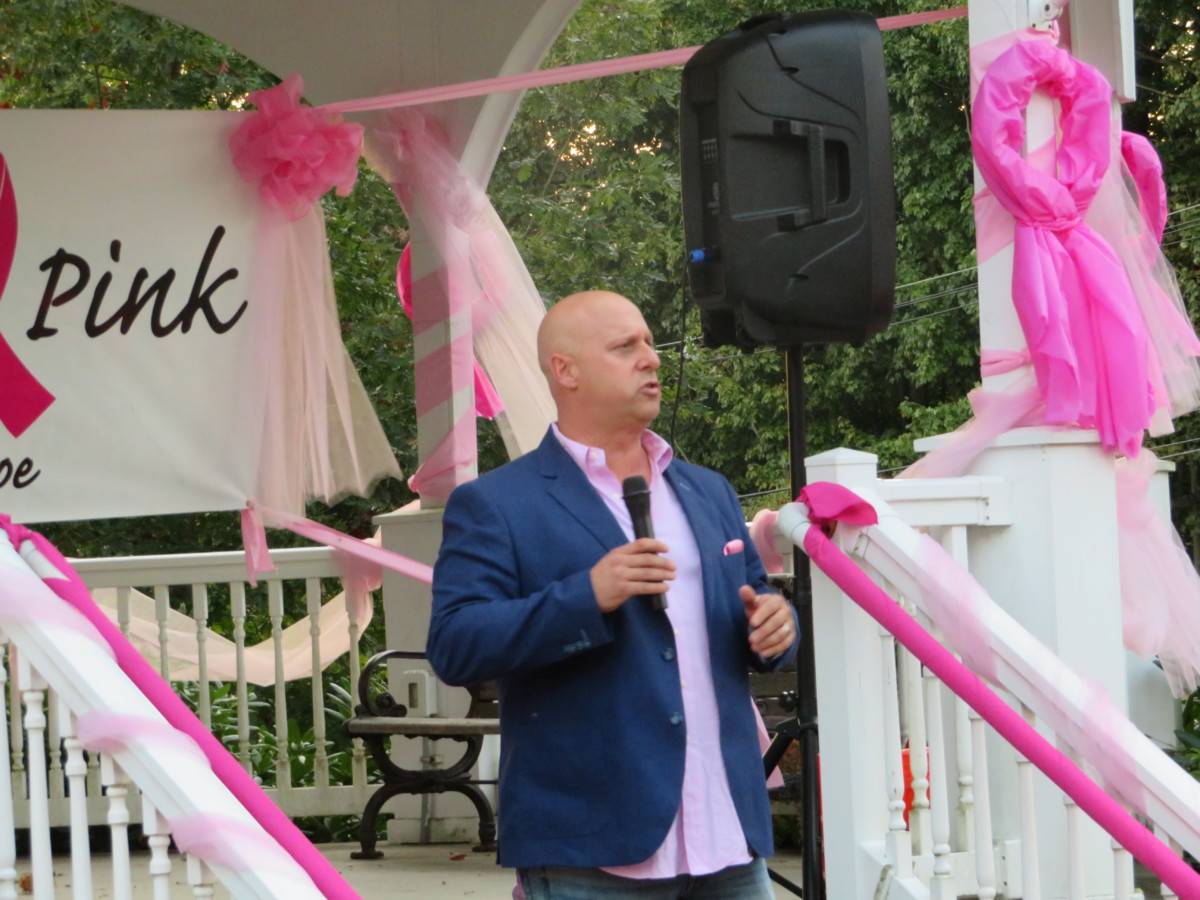 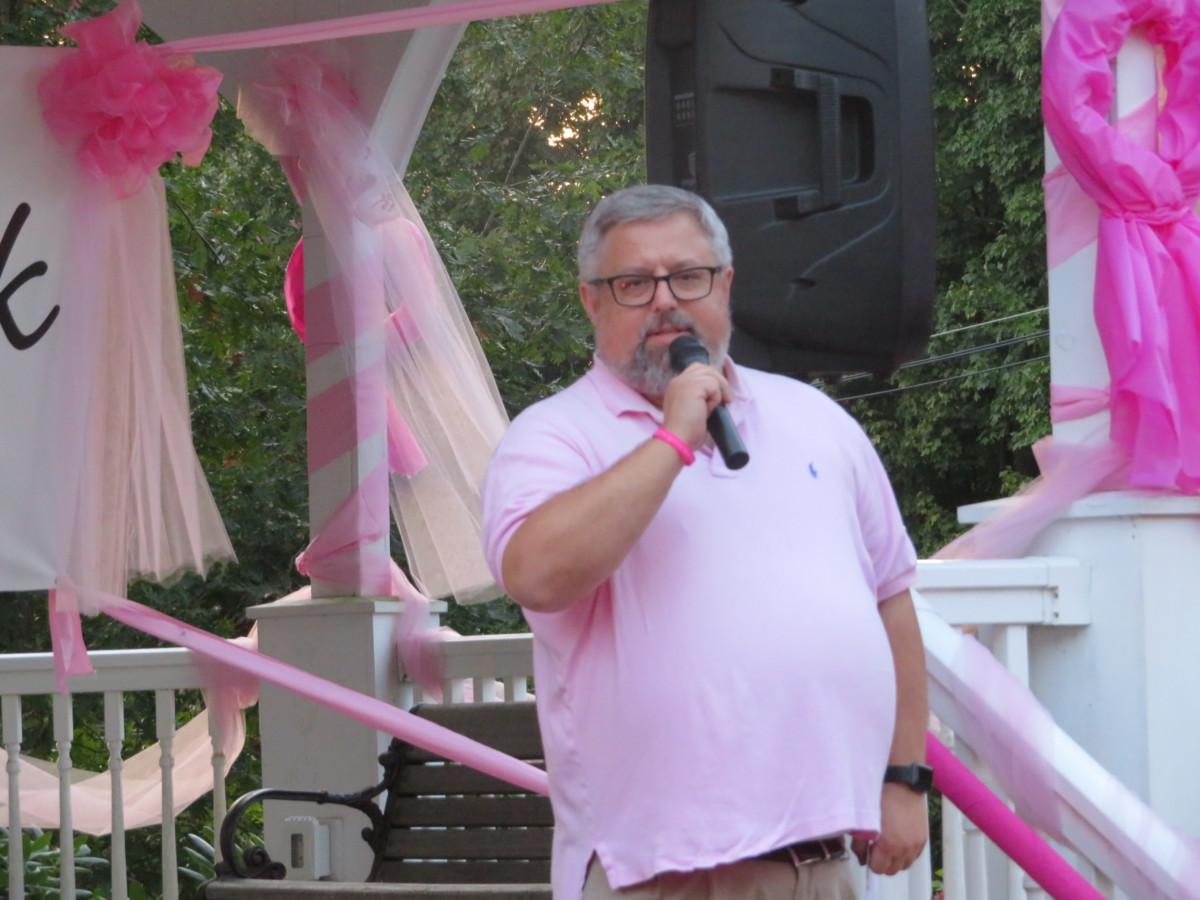 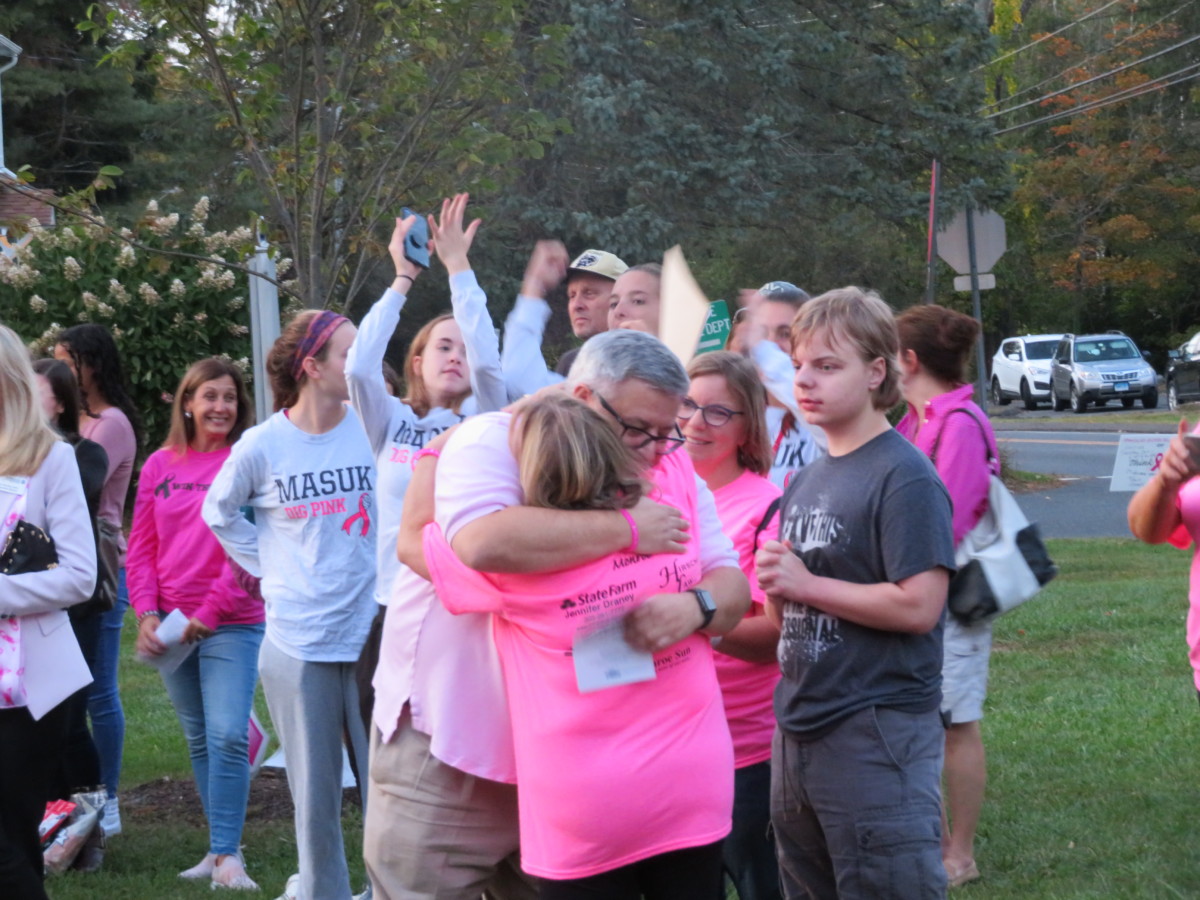 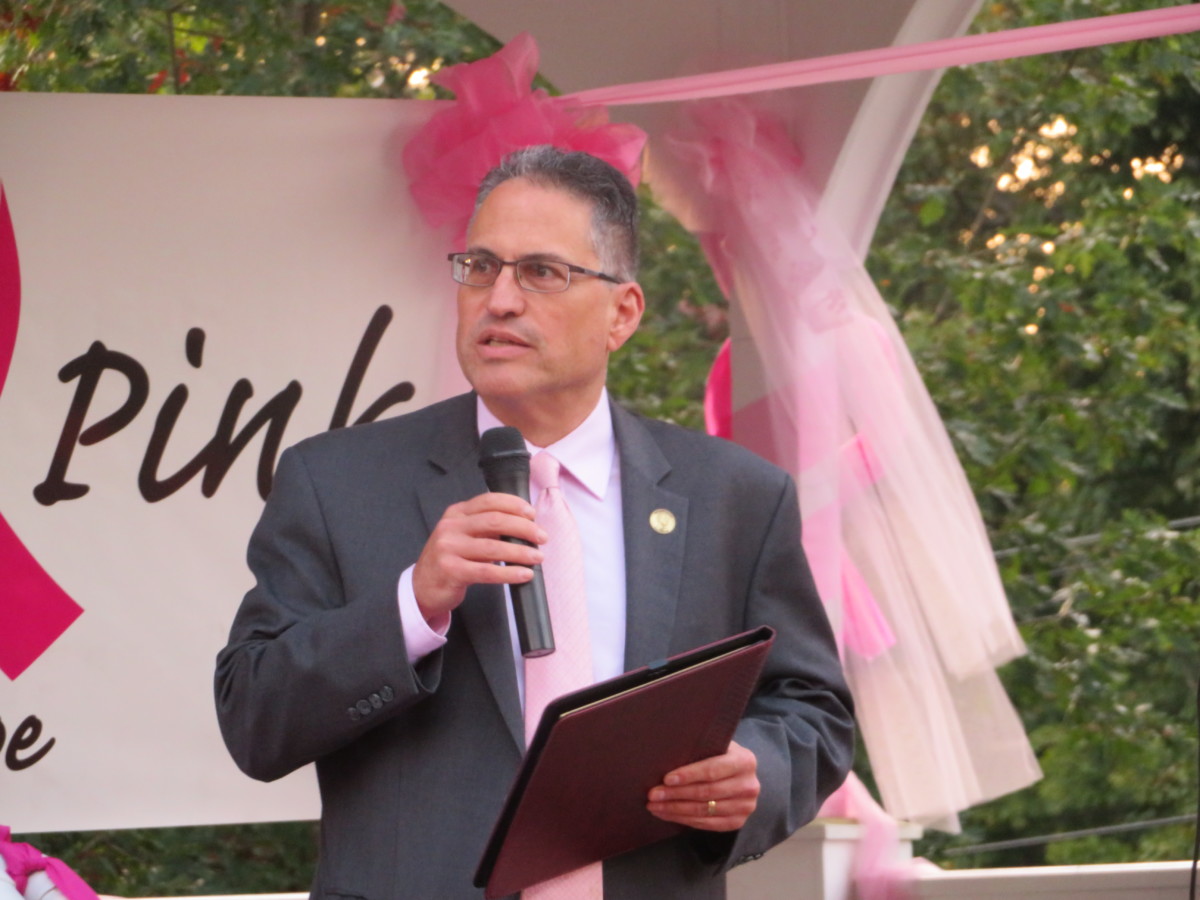 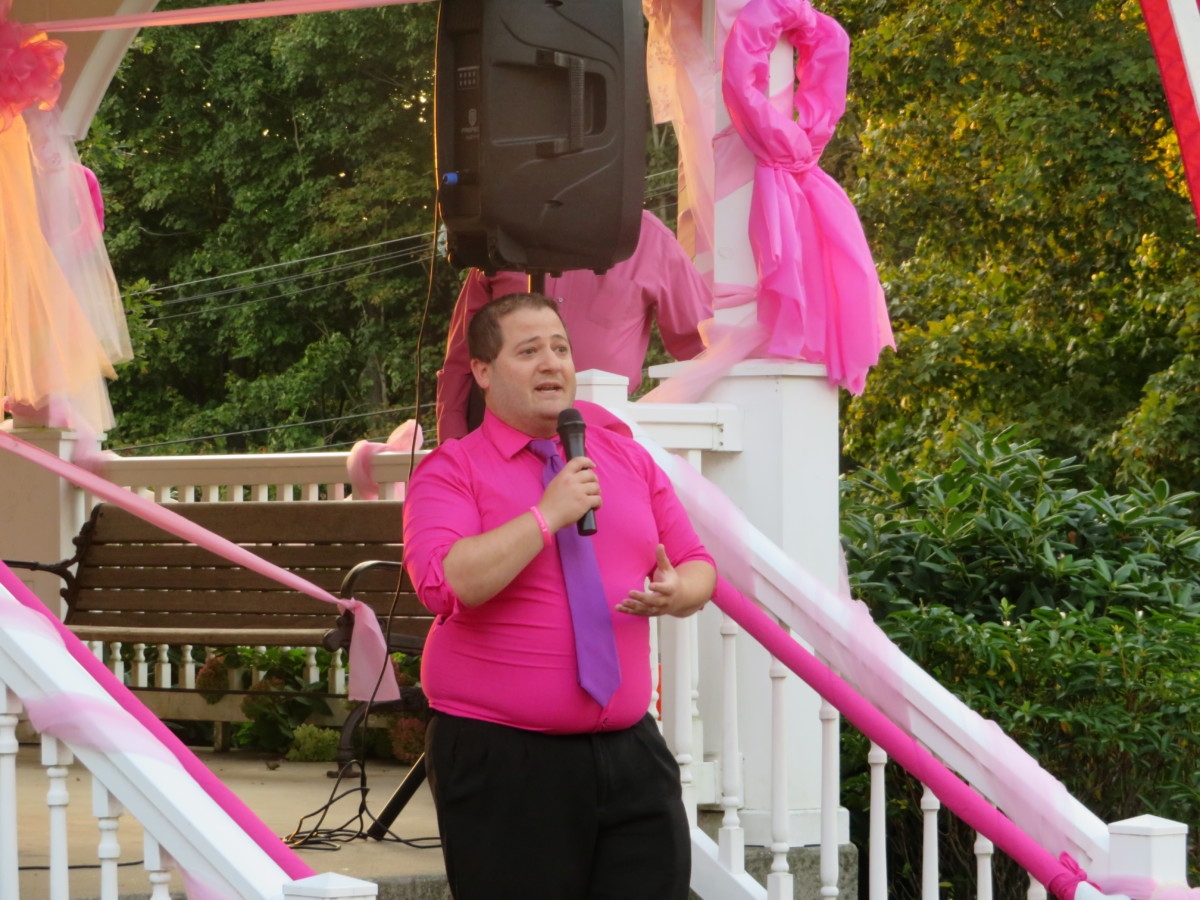 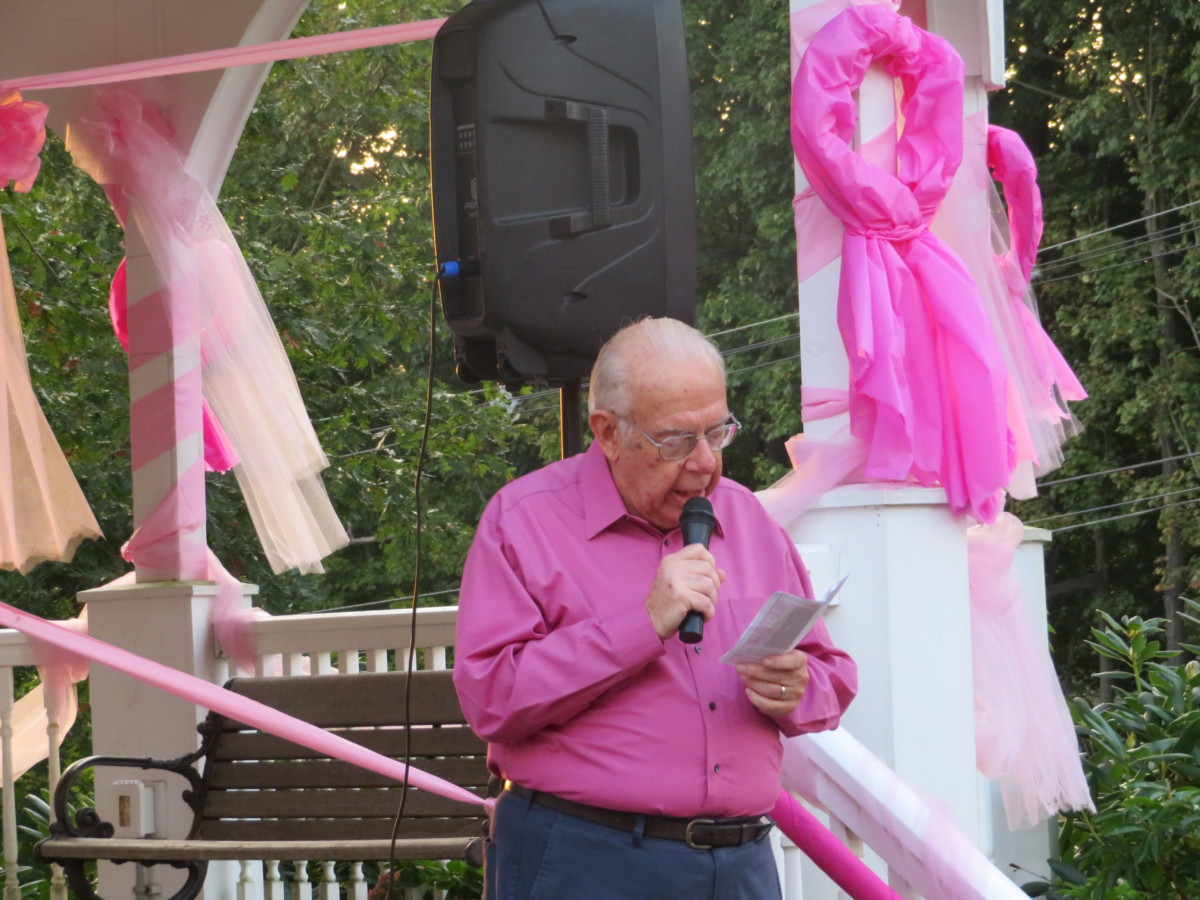 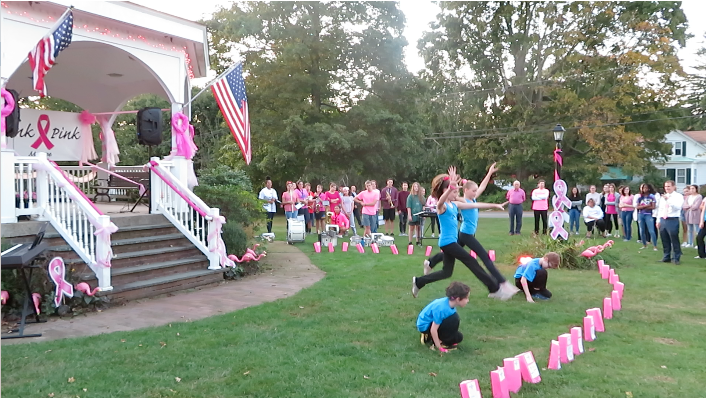 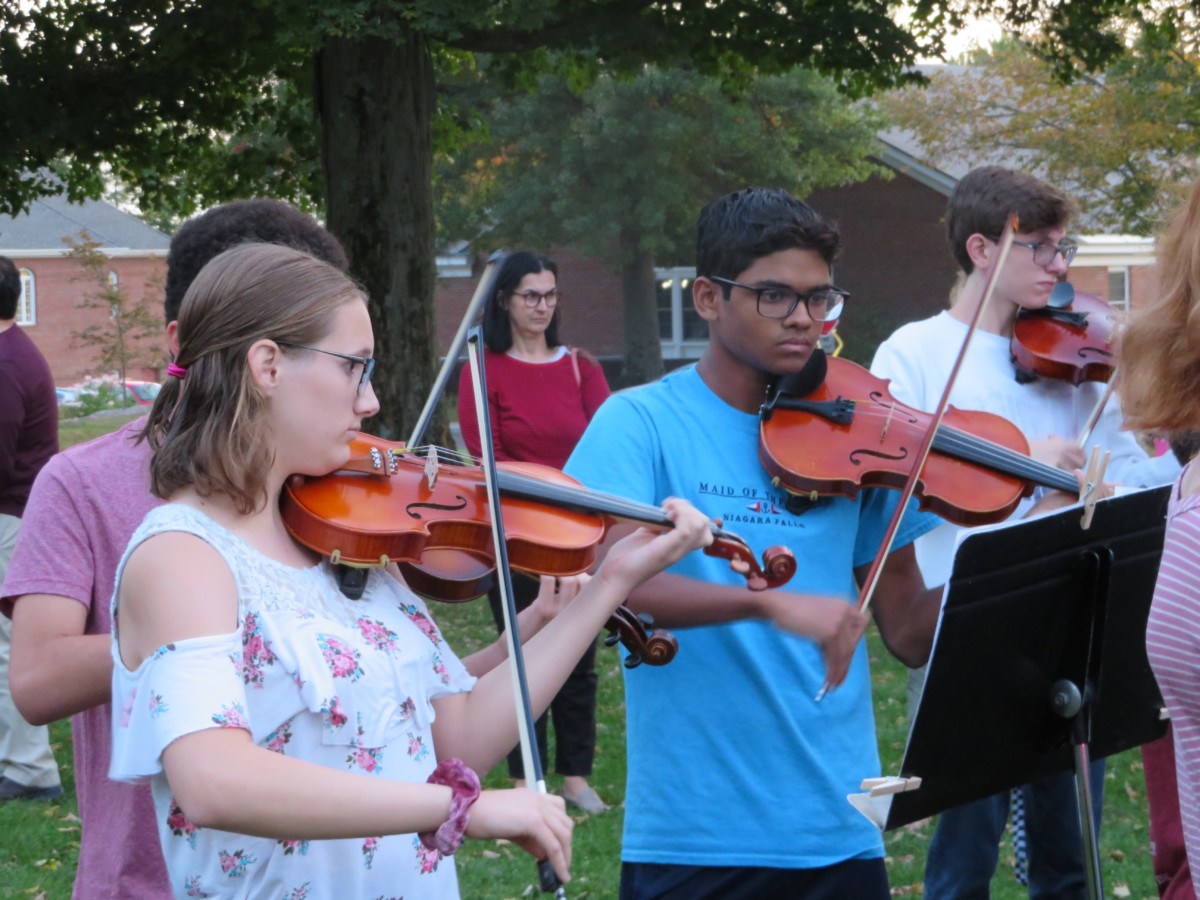 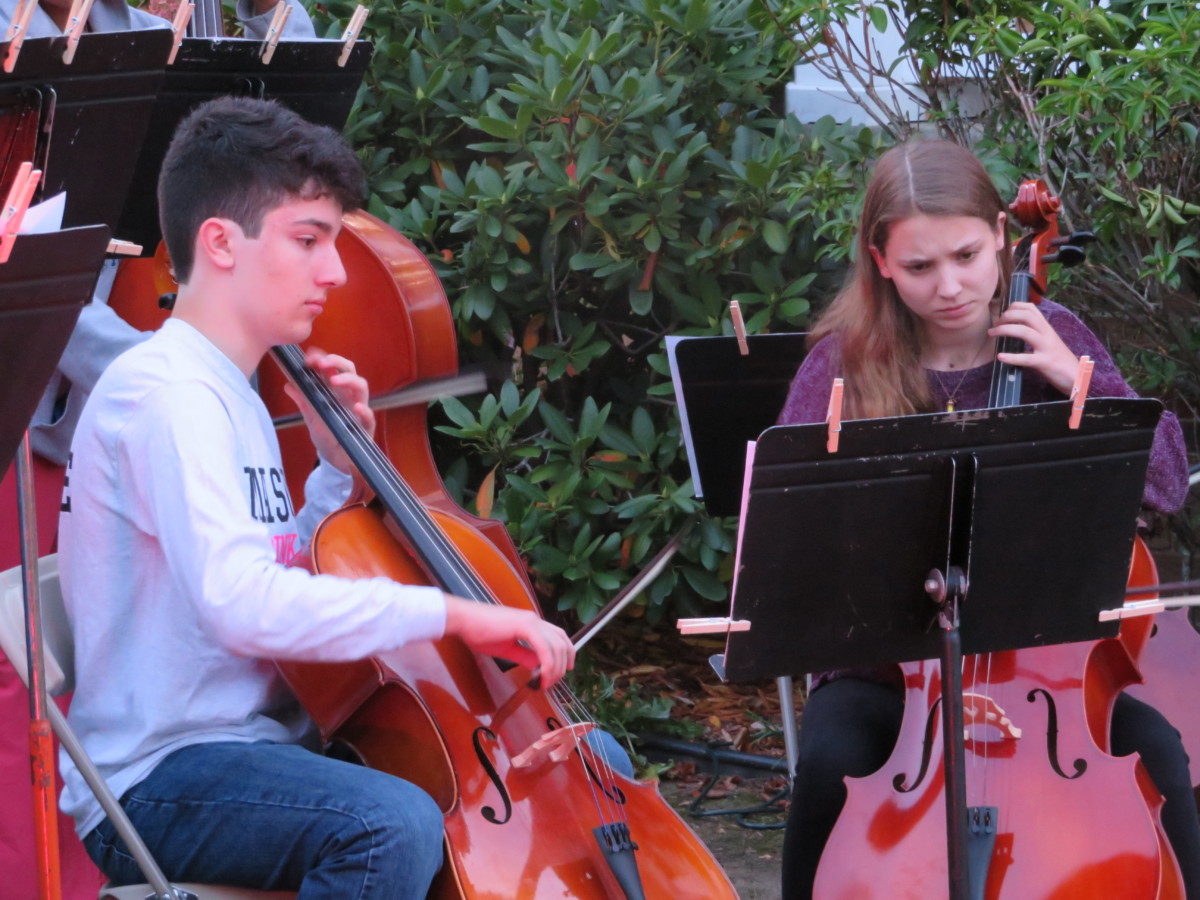 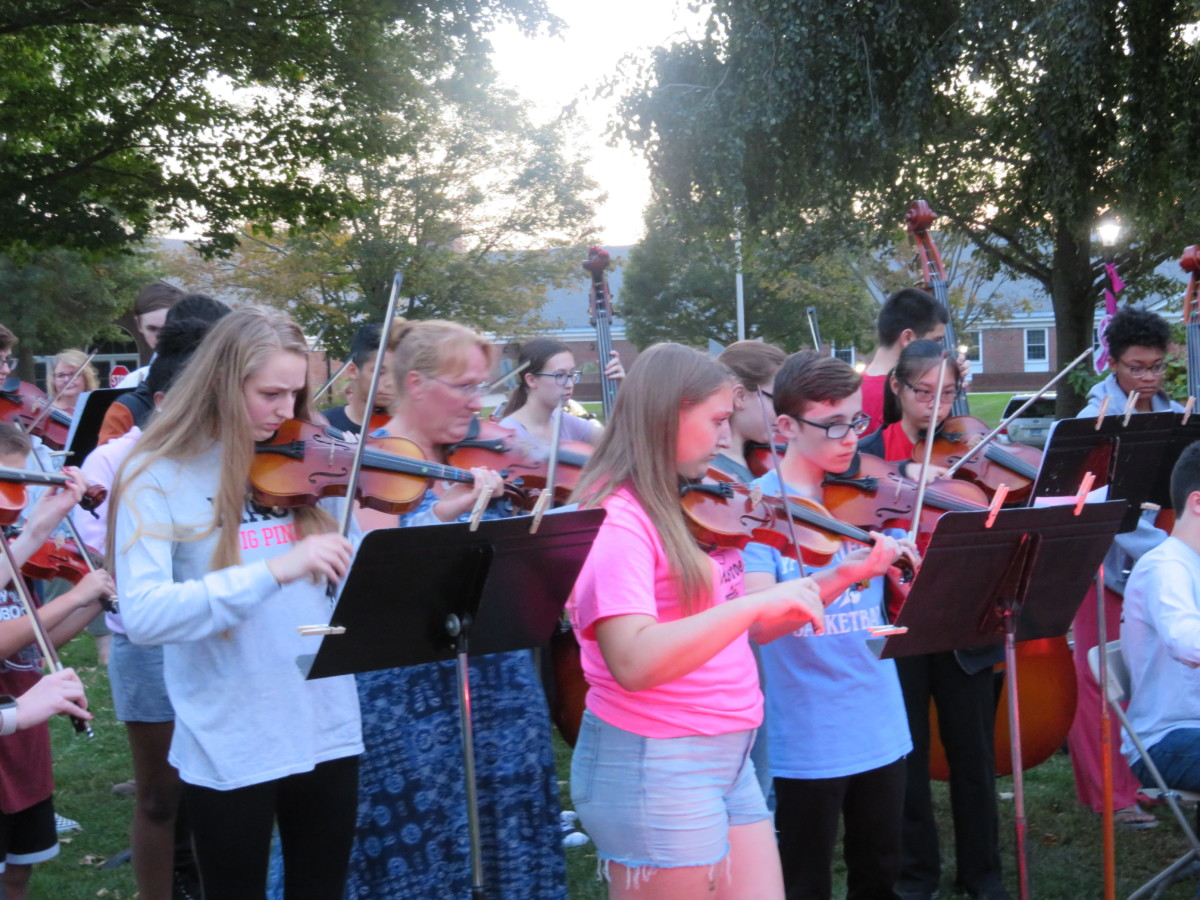 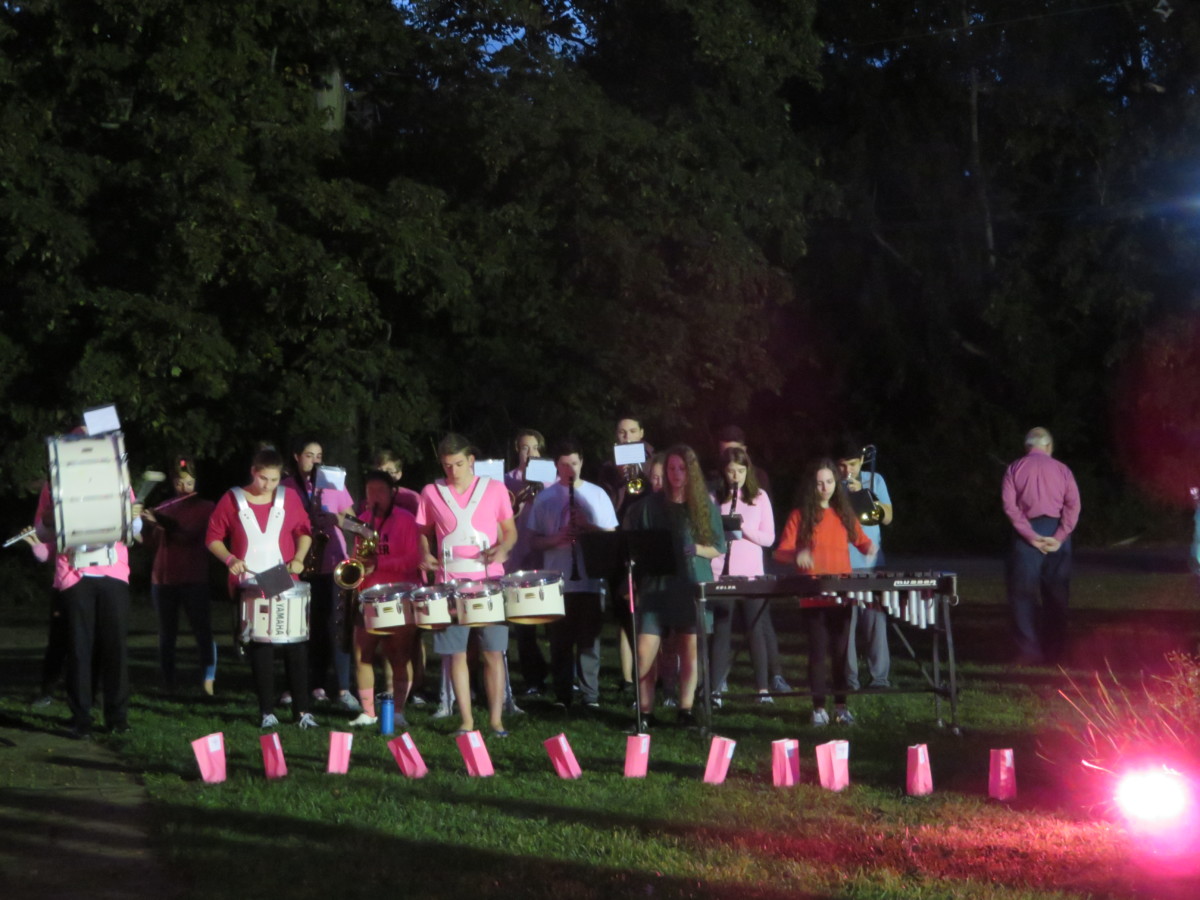 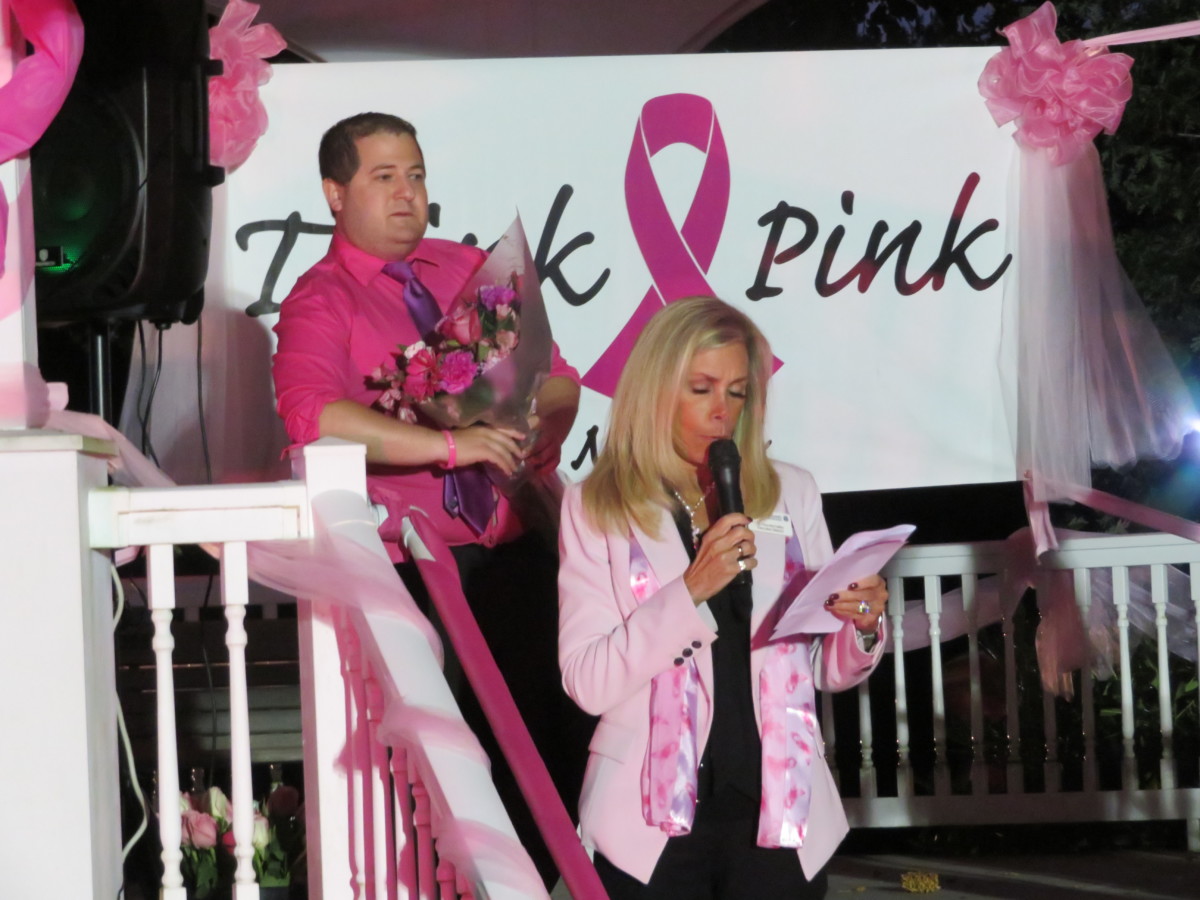 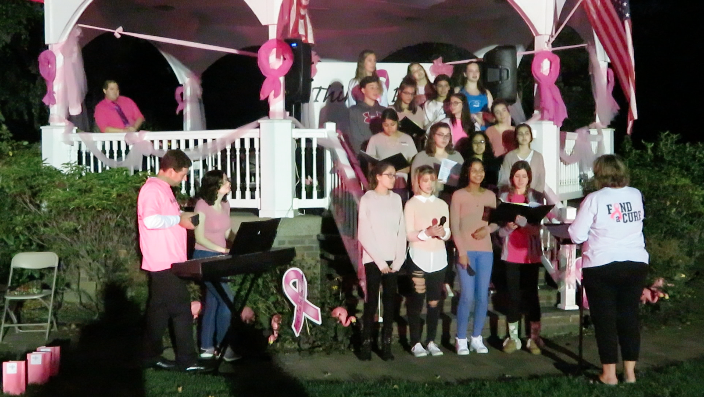 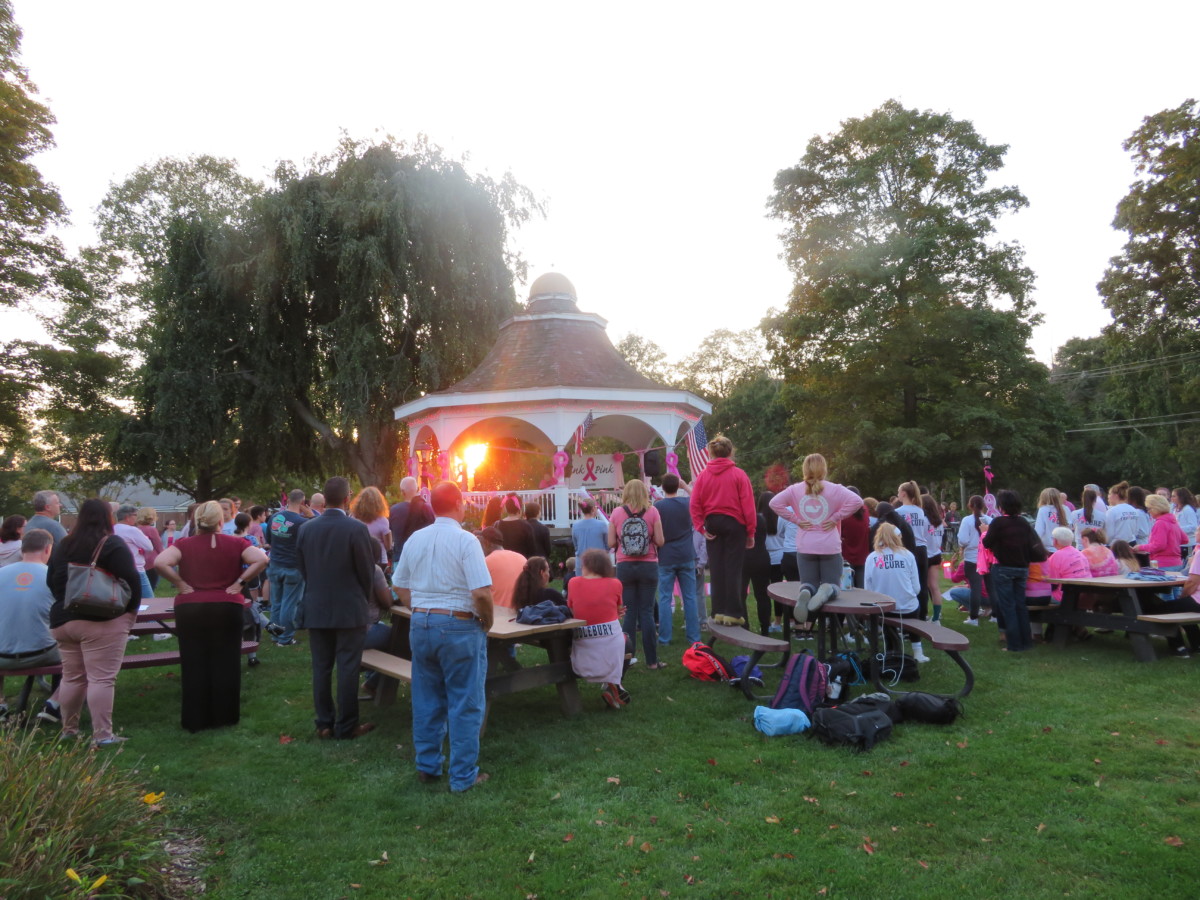 Hirsch spoke of how easily people can spend 20 to 30 hours planning for a vacation. He said it only takes an hour or two to schedule a mammogram and about 15 minutes to encourage a family member or a friend to do the same.

He said routine testing can guarantee more vacations over time.

When Kellogg spoke, he thanked St. Vincent’s SWIM Across the Sound for being an active partner in the effort. The first selectman noted how they will have their mobile mammography van at this Friday’s Monroe Farmers’ Market, from 3 to 6 p.m.

Visitors to the market can have free tests and a breast cancer surgeon will be on hand to discuss breast health.

Bonnie Maur told the story of how she was enjoying life with her family and her career when she was diagnosed with breast cancer over a decade ago. She said it was the way Monroe took care of her, that inspired her to give back.

Maur often came home exhausted during many months of cancer treatments and crashed on her couch. She said teachers chipped in to pay for a cleaning service to clean her house.

“Parents in this town put a cooler on my front doorstep and every day there was a meal,” Maur said. “They said they wouldn’t tell me who was leaving it. ‘No thanks necessary.’ What a community we live in. I’ll never forget what this community did for me.”

She said former students started showing up on her doorstep, some with flowers, some with gift cards and some for a hug.

Maur said Patti Kallas making her honorary chair of the Relay for Life in 2008 got her out of her shell. She also thanked the crowd, Kellogg, committee members and students for their support of Think Pink Monroe.

On Tuesday night, the Masuk High School choir, orchestra and band performed and dancers from Monroe Dance Academy also did some numbers.

Maur has been cancer free for 14 years. “People are what make our lives complete,” she said. “It is the people. All of you in this town have changed my life.”

Jason Maur got choked up when recalling how he volunteered to stay home from school when his mother was diagnosed, but she wouldn’t hear of it.

“At first, when I went to school I was very frightened and very nervous about what was going to happen,” he said, “but then this town came together like nothing I’ve ever seen and took care of her. And I’ve seen this town take care of countless other people through the years, so that’s how Monroe truly thinks pink.”