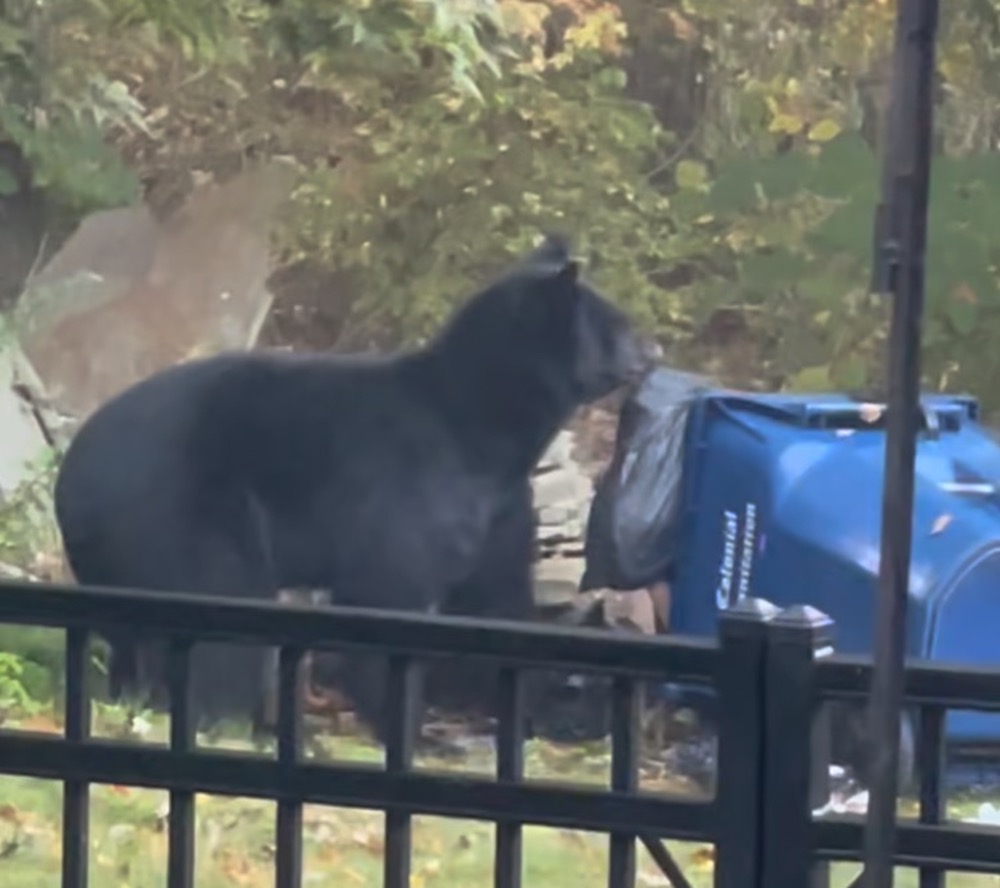 A black bear rummages through trash on Fan Hill Road.

MONROE, CT — Black bears are wandering all over town, while eating everything they can get their paws on. Police are receiving reports of tipped over trash cans, toppled bird feeders and break-ins into chicken coops.

Animal Control Officer Ed Risko said the animals are at the stage of hyperphagia, when bears must consume 20,000 calories a day before hibernation.

“They’re constantly on the move, walking and eating,” he said Thursday.

Risko said bears forage for at least 20 hours a day during this stage, until hibernation which is in late December, depending on the weather.

Risko showed a photo of a bear rummaging through a trash bin on Fan Hill Road.

Animal Control recommended Critter Clips to secure the trash after a bear — Bobby 217 — got into it a couple of weeks ago, but Risko said that didn’t stop another bear this week.

He said bears can figure out levers and pull door handles, adding secured garbage containers still must be easier to open for trash haulers on pickup days.

Risko said bungee cords do not work with raccoons or bears.

“Bears are like raccoons,” he said. “They’re smart and looking for an easy meal.”

Risko said he did find bear proof trash bins online, but the prices range from $250 to $350.

He said bears follow the same route, so if one was in your yard recently, it should be back after it turns around, especially if there was food the last time.

The bear that knocked over the bin on Fan Hill Road continued over the hill, before finding a chicken coop on Garter Road, Risko said. 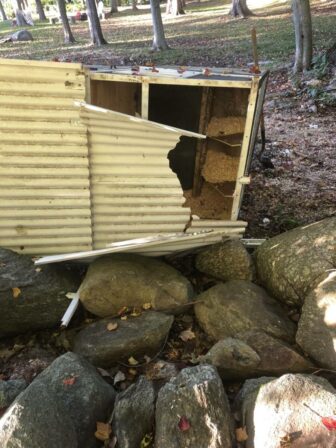 This is a photo of one of the three chicken coops broken into over the past week, as bears forage for food.

Another bear broke into chicken coops on two different properties on Far Horizon Road. Risko said a total of eight chickens were reported missing after the three incidents.

The only effective way to secure a chicken coop from bears is to install electric fencing, according to Risko.

Risko said residents there tried to scare the bear away by making noise with pots and pans, but the animal had gotten conditioned to hearing noises and just laid there, eating the seeds.

Last weekend, Risko said a homeowner at the same property used his chainsaw in his front yard and, when he walked to the back of his property, he saw a black bear at the bird feeder.

When yelling and making noise does not make a bear leave your property, Risko said, “you’ve got to make noise and follow it up by throwing something at the animal to reinforce it.”

He suggests stones or tin cans filled with coins, so it rattles when it hits the bear.

After getting into the bird feeder, Risko said the bear went to Old Tannery Road in a straight line continuing to Far Horizon Road, where it got into two chicken coops, then to Harvester Road.

Other bear sightings were at the south end of Wheeler Road, Pastors Walk and Knollwood Street.

“They’re all over the place,” Risko said, while looking at his map. “It’s almost like tracking squirrels now.”

He said Monroe Animal Control used to track fox dens 20 years ago, but now there are so many foxes in town it became pointless to locate all of the den sites.

Within three-to-five years, Risko predicts black bears will be so numerous that it will become more common for the animals to establish dens in sheds and under porches.

Here is some information from the Monroe Police Department on how to avoid attracting bears:

More tips can be found by clicking here.