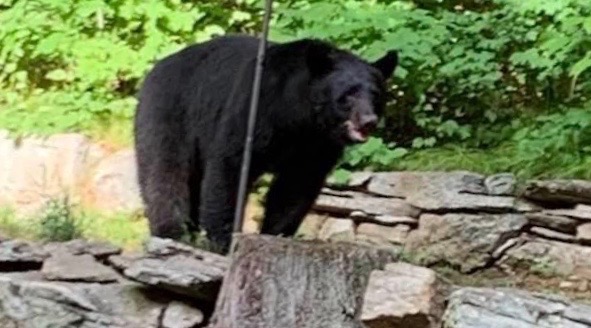 Monroe Animal Control has been receiving reports of bear sightings every day. Contributed

MONROE, CT — Black bears are invading bird feeders, rooting through trash and crossing roadways, while passing through neighborhoods — and their daily activities have not gone unnoticed. In fact, bear sightings rose from 52 calls last year to 140 this year — and counting, according to Animal Control Officer Ed Risko.

Risko said some of the activity was going on under the radar for years, but now that the coronavirus pandemic has confined people to their homes, the animals are more visible.

“Every day there’s been a bear, this whole week and another one yesterday,” he said of calls to his office Thursday. “Everybody is home using their property and they’re starting to see animals use their property too.”

Risko compares it to how burglars used to be most active between 9 a.m. and 2 p.m., when most people were at work and school.

Other possible factors for the rising number of bear sightings, according to Risko, is a possible increase in the bear population and the fact that more homes are equipped with Ring security cameras this year. 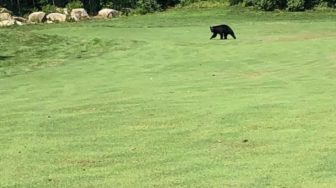 On Thursday morning, Risko pulled on a pair of rubber wading boots and trudged into the woods along Huntingtown Road, on his way to break up a beaver dam on Guskie Pond that was causing flooding problems in the neighborhood.

“This used to be a road,” he said, pointing to a patch of woods leading up a small hill. “There used to be a mill at this location. The bears are using this old roadway.”

Looking out over the pond, piles of sticks and mud form a beaver dam in the distance.

“Bears are using the dam to cross Guskie Pond,” Risko said. “They’ll be bathing in here to cool down.”

Bears moving past the pond end up on Hattertown and Judd roads on their way into Newtown, but that is not the limit of bear travels through Monroe. Risko said bears have been spotted all over town. He said a bear’s range can be 15 to 30 square miles from its birthplace.

June and July is mating season for black bears, according to Risko. He said the males are active right now as they seek out females.

How many bears come through? 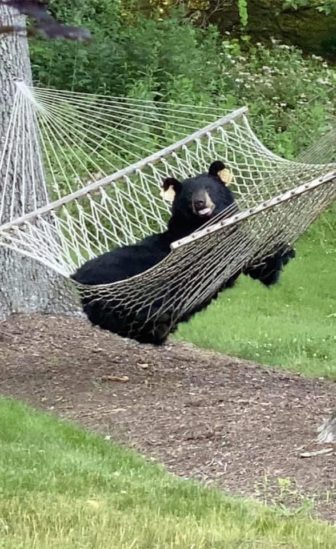 Bear No. 217, seen here, lounging on a hammock in a yard on North Street in Easton, lives in Fairfield County and often passes through Monroe. Contributed

Opening a photo from the camera roll of his cellphone, Risko showed a picture of a black bear laying on a hammock in a yard on North Street in Easton. Connecticut Department of Energy and Environmental Protection ear tags in the image are too small to read, but Risko said she is number 217.

“Two-seventeen comes through here on the way to Redding,” he said, adding the bear lives in Fairfield County and is the only one that can be positively identified.

Last Sunday, Risko said No. 217 entered Monroe from Shelton, coming through Squire Road. Then a sighting was later reported on Old Castle Drive.

Risko tries to get an idea of the number of bears coming through by comparing times and locations of sightings and descriptions given by residents, a “black muzzle,” a “tan muzzle,” a “white blaze chest” …

“We had four-to-five individuals last year and have four-to-six, so far this year,” he said.

If you encounter a bear …

“Black bears are generally shy and secretive and usually fearful of humans, but if they regularly find food near houses and areas of human activity, they could lose their fear of humans,” according to a fact sheet from the Monroe Police Department. But unlike grizzly bears, black bears are seldom aggressive toward humans.

Monroe Animal Control reports bear sightings to the DEEP and gives residents fact sheets on the animals. Among the tips is what to do if you encounter a bear:

Stop: Never approach a bear at any time for any reason. If you see bear cubs, leave the area.

Give it space: Give any bear you encounter a way to escape. Step off the trail and slowly walk away.

Stay calm: Do not run or make sudden movements. Face the bear and slowly back away.

Don’t run: It may encourage the bear to chase you.

If a bear attacks you: Fight back. In the unlikely event you are attacked, fight back, shout, be aggressive, use rocks, sticks and hands.

“The black bear is an intelligent animal with keen senses of smell and hearing,” according to facts provided by the Monroe Police Department, “it can detect the slightest aroma of food, which can lead a bear to campsites and near homes. Odor from carelessly stored food and garbage can lure bears long distances.”

A fact sheet Risko provides to residents reporting bear sightings has a section on camping in bear country:

Now, Risko said most bears coming through Monroe target bird feeders for food. In the fall, he said the animals eat fruit that drops from trees.

“We’ll ask people to pick it up,” he said of fruit that falls onto the ground.

Among the hiking and camping tips provided by the Monroe Police Department:

Do make your presence known by making noise and waving your arms if you see a bear while hiking.

Do keep dogs on a leash and under control. A roaming dog might be perceived as a threat to a bear or its cubs.

Don’t cook food near your tent or store food inside your tent. Instead, keep food in a secure vehicle or use rope to suspend it between two trees.

Don’t climb a tree, but wait in a vehicle or building for the bear to leave an area.

Bear do’s and don’ts near your home

Bears are attracted to the garbage, pet food, compost piles, fruit trees and bird feeders around houses, according to the Monroe Police Department.

Here is a list police provided of do’s and don’ts around your home:

Do make bird feeders and bird food inaccessible by discontinuing the feeding of birds from late March through November or by hanging feeders at least 10 feet above the ground and six feet away from tree trunks.

Do eliminate food attractants by placing garbage cans inside a garage or shed. Add ammonia to trash to make it unpalatable.

Do clean and store grills away after use.

Don’t add meat or sweets to a compost pile.

3 thoughts on “If you encounter a black bear, slowly back away”