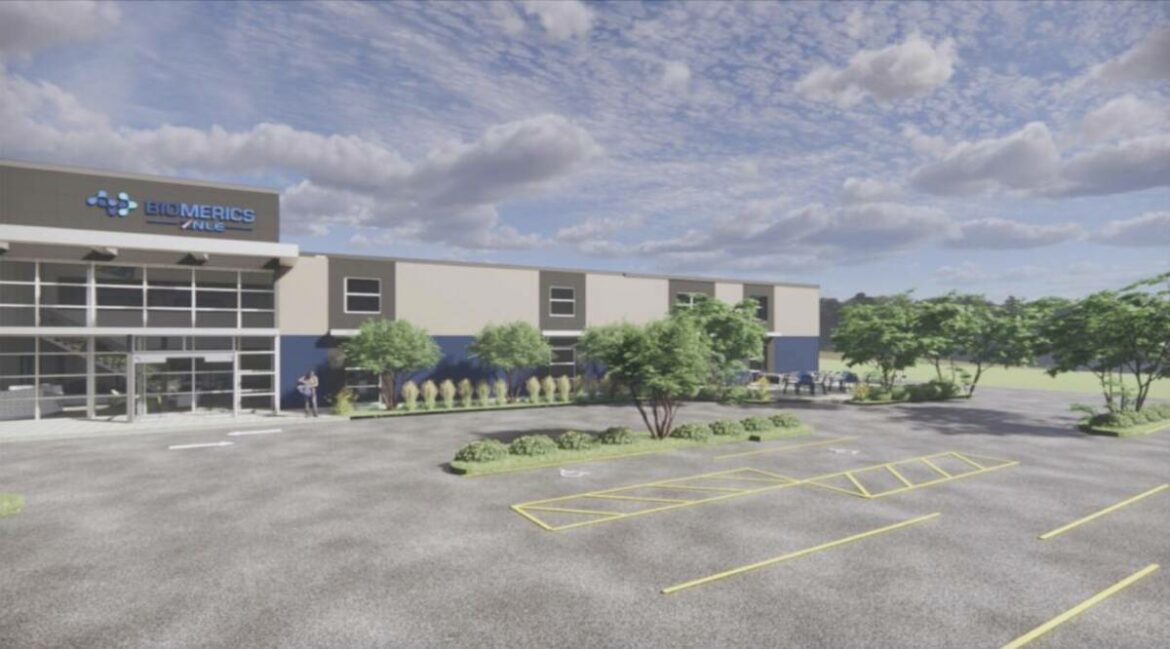 This computer rendering shows how Biomerics NLE will look with the updated facade and landscaping.

MONROE, CT — Biomerics NLE, a manufacturer specializing in laser-processed components and assemblies, received unanimous approval from the Planning and Zoning Commission to rezone its property at 246 Main St. and expand its facility within the existing building.

Biomerics plans to move into the space once occupied by Maltose Express and Veracious Brewing Company in front of the building, and use it for offices, conference rooms and a cafeteria for its employees — with an outdoor patio off the parking lot.

During Thursday night’s hearing, Jason Edwards, owner of J. Edward & Associates land surveying and civil engineers, told commissioners the company will use existing parking with no substantial changes to the building’s footprint.

“We’re only proposing some architectural improvements to the exterior,” said Edwards, who represents the property owner, DG Commercial LLC.

In addition to the special exception permit for the site work, the commission voted to allow a zone change for the 5.75-acre-property, from Business-2 to Industrial-1, which allows uses more consistent with what Biomerics does.

The parking lot will be upgraded to include parking islands, trees and other plantings, while meeting Americans with Disabilities Act requirements.

The building will have a new exterior insulation and finish system for its front facade, which will be painted beige, dark blue and gray, according to the architectural plan designed by Infinity Group.

The trim and steel overhang above the windows, the foyer overhang and curtain wall mullions will be painted white. The finish will be dark brown metal cladding and the entry facade will have gray metal cladding.

The project will also include some interior refitting. 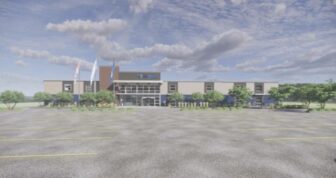 This computer rendering shows how Biomerics NLE will look with the updated facade and landscaping.

Though Edwards submitted a revised landscaping plan to Town Engineer Scott Schatzlein late in the week, Town Planner Rick Schultz and Planning and Zoning Commission members did not see it before the hearing.

“I had an issue with the landscaping plan when I looked at the plan, and that plan is totally different,” Commissioner Leon Ambrose said of the revised version. “I don’t understand why we don’t have that.”

Schultz said Ambrose was correct, the commission is supposed to have the plan during its deliberation, but the commission later agreed to require the revised landscaping plan as a condition of approval.

Ambrose asked if the developer was going to put in a sidewalk along the property’s frontage on Main Street, something the commission has been requiring commercial applicants to do.

“Perhaps the commission could make it a condition of approval,” Edwards said. “We would ask that you require the sidewalks when construction starts across the street.”

A senior housing development was previously approved at 195 Main St., close to where SkateTime used to be. Once that is built, residents could use a sidewalk to get to Flames Restaurant and other businesses.

David Bjorklund, a civil engineer with J. Edwards & Associates, said sidewalks make sense if the elderly housing project is built. If sidewalks are needed in the future, he said his client can come back before the commission to discuss construction of a sidewalk.

“But to build a sidewalk today, I believe, doesn’t make sense,” Bjorklund said.

Bjorklund noted the property is close to wetlands and water company property to the north, nearly extending all the way to Stepney Green.

However, it was agreed that Route 25 is dangerous to walk across, and several commissioners expressed their belief that the development of 195 Main St. should not dictate whether 246 Main St. has a sidewalk.

“I don’t want to hold up the project for sidewalks, but I don’t think 195 Main St. has anything to do with it,” Commissioner Robert Westlund said.

“So Dave, you don’t want to put in a sidewalk unless that site is developed? I don’t see a connection,” Ambrose said.

Other than 195 Main St., Bjorklund said the area will not see any more commercial development to the south. “It’s going to be a sidewalk to nowhere,” he said.

“We required 195 to have a sidewalk and they went to the state and got an approval,” Ambrose said.

Schultz said sidewalks could be required as a condition of approval, for a time when the commission determines it is needed and the DOT approves it. He said the commission could also hold a bond with the money returned to the developer once a sidewalk is built.

Chairman Michael O’Reilly said he agrees with the condition, adding he does not think bonding is necessary.

“I think bonding is a bit of an overreach,” Westlund agreed.

Nicole Lupo, a commission alternate, thanked Biomerics for staying in Monroe and praised the plans for the new facade and patio.

During the public comment portion of the hearing, Cathleen Lindstrom, who is a member of the Monroe Architectural Review Board, said there is a precedent for requiring sidewalks in the area, noting that the car wash at 178 Main St. has a sidewalk in front.

Prior to the commission’s unanimous approvals, the ARB issued a letter of recommendation for the design of the building.