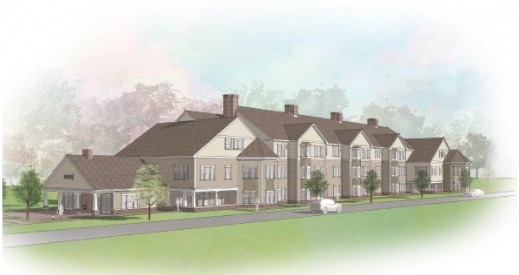 MONROE, CT — A plan to build 49-units of affordable housing for residents age 62-and-older near the former Skate Time property on Main Street appears to be headed for an approval. Planning and Zoning Commission members expressed unanimous support for the proposal Thursday, and directed staff to draft a motion of approval to voted on at their next meeting.

Connecticut Housing Partners, which has been developing, owning and managing affordable housing throughout the state for 31 years, worked closely with town land use staff throughout the process.

“I think it’s a great addition to the town,” said Robert Westlund, a commissioner. “It’s been thoughtfully laid out and I think it will be architecturally a nice feature on our main corridor.”

“At first, I was concerned about three floors, but then, looking at the design, it almost hides the third floor,” said Ryan Condon, the commission secretary. “I’m okay with it. I would vote for an approval.”

David Goslin, an architect from Crosskey Architects in Hartford, has said he designed the 50,000-square-foot building to “kind of step down” on the ends, so it does not appear to be three stories.

The housing would be built on just over two acres at 195, 201 and 211 Main Street. David S. Hoopes, an attorney for CHP, said it will be an attractive and well designed project on a site naturally buffered from neighborhood impacts.

The application was filed under the Connecticut’s 8-30g affordable housing statute, which means the town could only deny it if the commission determined it posed a threat to public health and safety.

Town Planner Rick Schultz said the town decided to work with developers on 8-30g applications, because commission denials are highly likely to be overturned in court, resulting in developments that fall short of the architectural expectations of the community.

Connecticut’s goal is for at least 10 percent of every municipality’s housing stock to be affordable under the state definition.

“A good thing about this, is it increases the percent of our housing stock that is affordable,” O’Reilly said of Connecticut Housing Partners’ plan. “So we’re slowly creeping toward that 10 percent level. I think this brings us up a half a percent.”

Hoopes said the housing will benefit seniors in Monroe and the surrounding area, who want to remain in the community.

Mutual Housing Association of Southwestern Connecticut Inc., doing business as CHP, filed the applications for the housing proposal for Monroe.