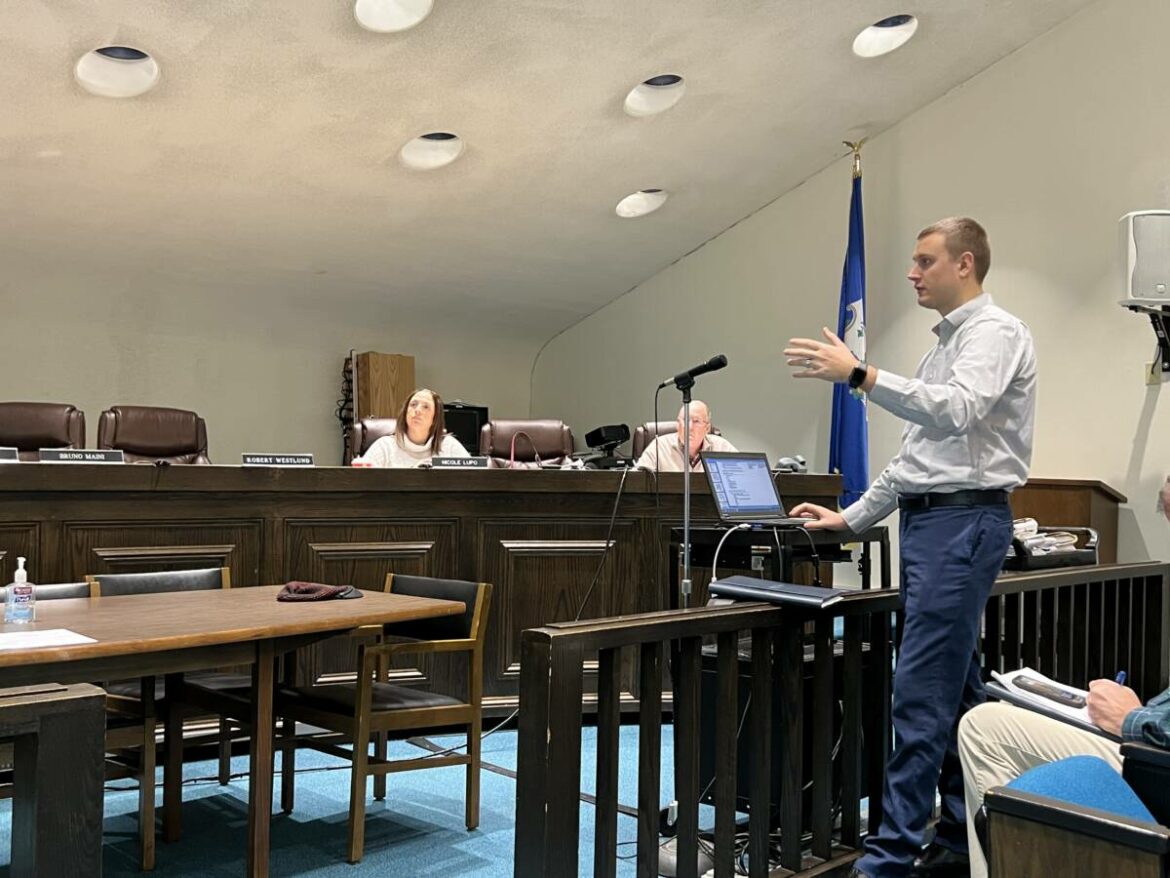 Chris Pawlowski, a civil engineer with Solli Engineering, presents a proposal for a manufacturing facility on Pepper Street to the Planning and Zoning Commission.

MONROE, CT — Planning and Zoning Commission members scrutinized the materials and equipment Monroe Recycling and Aggregates LLC wants to use at a 9,000-square-foot manufacturing facility to be built at 467 and 485 Pepper St.

The developer presented the proposal, which includes the operation of a 56,853-square-foot outdoor storage facility, at a continued hearing last Thursday.

A scale would be used to weigh material brought in by trucks to the south of the property for a crushing, screening, processing operation inside the building at 467 Pepper St. Outside the building processed materials would be placed in finished product bins and sold.

The outdoor area would be surrounded by a fence and jersey barrier. There will be a 50-foot landscaped buffer in the front and back of the property, which would have a drainage plan, erosion and dust control.

The property at 485 Pepper St. has previous zoning, wetlands and septic approvals for a 4,000-square-foot processing facility. But the applicant now needs a special exception permit for the new proposal, which would expand the operation.

An Inland Wetlands Commission hearing for the new proposal was closed and awaiting a decision.

One of three screeners for the operation would be outside the building.

Planning and Zoning Chairman Michael O’Reilly reminded the applicant that the commission looked favorably upon the original proposal, because the entire operation would be indoors.

“I would feel better if the outdoor screener was brought inside, so all screening and crushing is inside as proposed with the first application,” he said. “That’s what sold four-out-of-five commissioners, because it’s near the Pequonnock River watershed and Rails to Trials.”

“It is critical to my client to operate this one screener outside,” said Chris Pawlowski, a civil engineer with Solli Engineering, a representative of the applicant. “It’s not a big screener.” 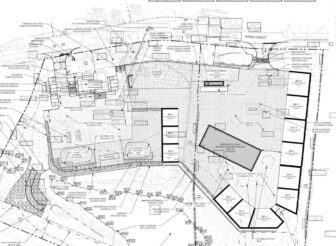 Solli Engineering drew up the plans for a processing facility at 467 and 485 Pepper St.

Leon Ambrosey, a commissioner, questioned the number of excavators that would be used, saying the applicant only needs one to load material since no digging is proposed on the site.

“You need four excavators? This is starting to be a storage yard,” he said. “You have too much equipment here.”

Ambrosey also asked why the operation needs three screeners, two in the building and one outside, which he said would cause “noise pollution.”

Pawlowski said an acoustic fence around the site would help to reduce the sound.

“It’s a manufacturing facility. As part of that, they need equipment,” Pawlowski said.

Pawlowski said the revised plan is for an operation on a larger property.

Pawlowski provided a specified materials list upon the request of some commissioners, so they know what would be processed on the site.

Ambrose noted there is concrete from sidewalks. “With rebar in it, it’s not considered clean fill, so I don’t want that as accepted material unless you have a manifest of where it came from,” he said. “I don’t want the recycling facility this is turning into.”

“It’s a manufacturing facility,” Pawlowski said. “They’re taking in materials and turning it into something.”

Ambrose said concrete brick that’s painted is also not considered clean fill. “I know that for fact,” he said.

“It can turn into a recycling facility,” Ambrose said. “You’re taking asphalt and crushing it into smaller materials and selling it. PCBs are in it. I have a problem with asphalt.”

Ambrose said he has concerns it could “turn into a disaster”, because of the nearby Pequonnock River. “I’m not going to approve a plan with concrete brick and asphalt,” he added.

Domenic Paniccia, a commission alternate, said the equipment could be curtailed a bit, and asked what the applicant intends to do with the asphalt.

Pawlowski said his client, Joe Grasso, is in the road business and makes a product called reclaimed asphalt. “It’s a road base, a product approved by the state of Connecticut,” he said. “They take old asphalt chunks and ground it up.”

Because the river is nearby, Paniccia asked how they treat asphalt with contaminants. Pawlowski said he didn’t have that information.

Dominic Smeraglino, a commission alternate, said he has concerns over demolition material being recycled, because you never know what is in older buildings. But Pawlowski told him construction demolition is on the rejected materials list.

“Any kind of concrete is demolition,” Smeraglino said.

Pawlowski said Connecticut’s definition of demolition is when you take a wrecking ball to a building, put the debris in a dumpster and haul it off. “That’s not what we’re doing here,” he said. “We will take sidewalks, so there are no windows etc.”

Ambrose asked if there will be testing to ensure clean fill is coming onto the site, along with a manifest of where it came from.

“I understand your concerns and we will look at that,” Pawlowski said. “I believe all material will have manifests with it. I will check.”

Anything that could not be processed during processing, would be placed in a bin and sold on the open market, Pawlowski said.

After answering commissioners’ questions, Pawlowski said his client would cut down the equipment list. “Thank you for your comments,” he said. “We would like to continue the hearing on January 19.”

The commission continued the hearing to that date.