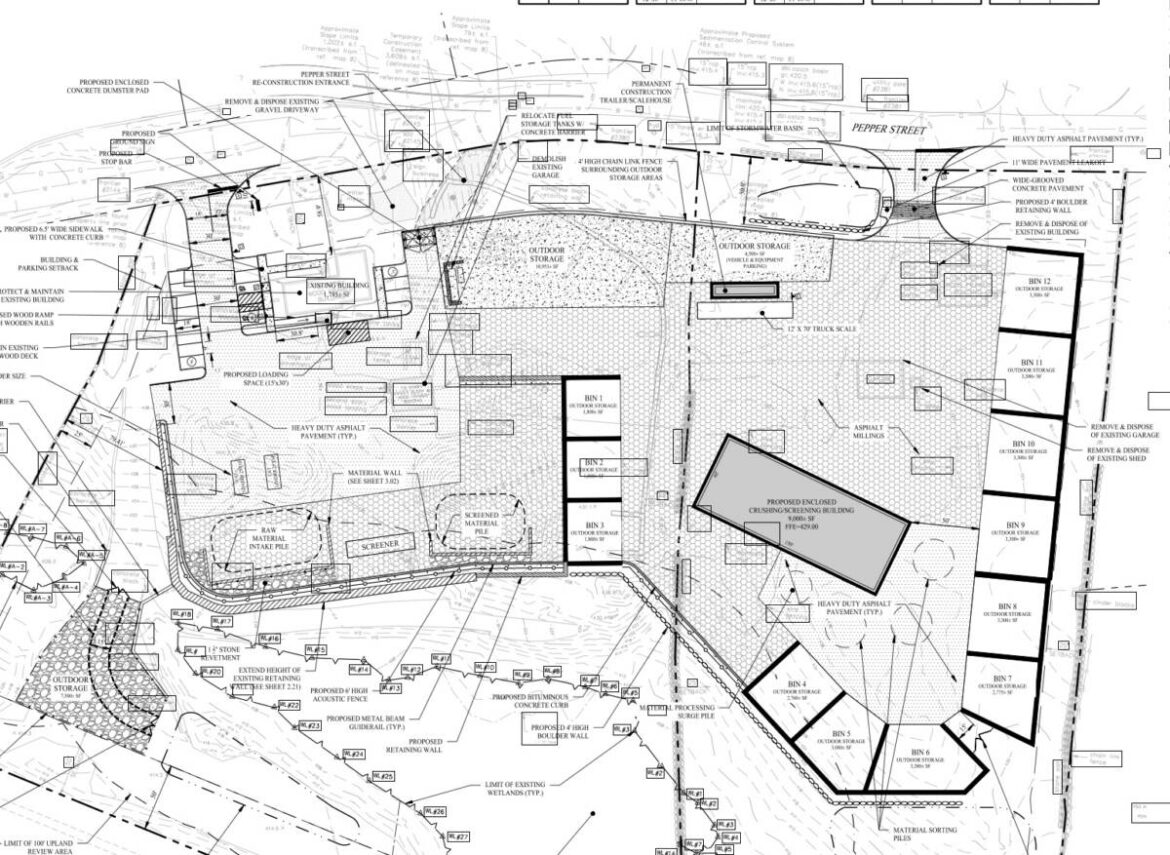 Solli Engineering drew up the plans for a processing facility at 467 and 485 Pepper St.

MONROE, CT — Monroe Recycling and Aggregates LLC wants to build a 9,000-square-foot manufacturing facility with operation of a 56,853-square-foot outdoor storage facility at 467 and 485 Pepper St.

A scale would be used to weigh material brought in by trucks to the south of the property for a crushing, screening, processing operation inside the building at 467 Pepper St. Outside the building processed materials would be placed in finished product bins and sold.

The outdoor area would be surrounded by a fence and jersey barrier. There will be a 50-foot landscaped buffer in the front and the back of the property, which would have a drainage plan, erosion and dust control.

During a Planning and Zoning Commission hearing Thursday, Chris Pawlowski, a civil engineer with Solli Engineering, a representative of the applicant, told the commission there will be an operations and maintenance plan.

The property at 485 Pepper St. has previous zoning, wetlands and septic approvals for a 4,000-square-foot processing facility. But the applicant now needs a special exception permit for the new proposal.

“We don’t allow recycling in this town,” said Leon Ambrosey, a commissioner.

“That’s the name of the company,” Pawlowski said. “They aren’t doing a recycling operation.”

“The last approval we gave was to crush rock, now there’s road waste and aggregate which is cement,” Ambrosey said of the expanded uses being proposed.

“I have an issue with crushing,” he said. “You’re bringing in asphalt to crush and recycle, getting into aggregate and concrete. There has to be some kind of product list, so we can keep track of this. It’s too broad for me. We don’t want it to turn into a recycling facility.”

“That’s not our intent,” Pawlowski said.

“The process here looks like it’s going to be a recycling facility,” Ambrosey said. “We have big concerns about asphalt being in our waterways and ending up in the Pequonnock River behind here.”

“You’re extending and adding to this,” Ambrosey said. “This could turn into a recycling facility, whether you look at it that way or not. I need a list of materials to be processed, so we can make sure it’s maintained.”

“How would you prevent it from going to a recycling plant?” Domenic Paniccia, a commission alternate, asked.

Pawlowski said his client could have a specified materials list. “Inland Wetlands also asked for a series of inspections,” he said. “We would be willing to provide updates. It’s not in the interest of our client to have that type of operation.”

Paniccia asked if there would be glass and Pawlowski said no. He also asked whether any materials would come from other contractors. Pawlowski said he can get that answer, adding they will have an equipment list, materials list and what is not accepted.

Grasso said they would not take building concrete, only concrete from road materials such as sidewalks and curbing.

Chairman Michael O’Reilly asked for a list of vehicles that would be on the property.

A cease and desist order

Town Planner Rick Schultz said there is a cease and desist order for 485 Pepper St.

“Recently, we were forced to do a road shutdown over a weekend to eliminate the bypass road on Pepper Street,” Grasso said. “We lost access to our property at 485 and used 467 to enter our staging property. That is to the benefit of the Pepper Street reconstruction project.”

Pawlowski said the land at 467 Pepper St. was bought by Grasso Construction, the contractor for the Pepper Street improvement project, for staging.

The applicant is applying to expand his processing operation to 467 Pepper St., making the activity less intense than having it at 485 Pepper St. alone, according to the proposal.

The plan has a pending application before the Inland Wetlands Commission. That hearing is closed and the commission will deliberate at an upcoming meeting. Septic approval is also needed from the Monroe Health Department.

The Planning and Zoning Commission hearing was continued.

3 thoughts on “A recycling operation? That’s not the intent.”