Keith White, left, takes the oath of office from First Selectman Ken Kellogg, who swears him in as Monroe's new police chief in a ceremony at Town Hall Friday.

MONROE, CT — A large crowd filed into the Council Chambers of Monroe Town Hall Friday afternoon, in a show of support for the town’s new police chief. Keith White, a 27-year-veteran of the department who rose through the ranks, from patrolman to captain, was sworn in as Monroe’s fifth police chief, following the retirement of longtime chief, John Salvatore.

The crowd was made up of family, friends, town police officers, retired police officers, firefighters, Monroe Emergency Medical Service personnel and town officials. Among them was White’s mother, Sandra.

“I feel a sense of pride in my husband and my son,” she said of Keith White and her late husband, Robert White, who was chief of the Shelton Police Department. “I spoke to some Shelton police officers who knew my husband and they said he would be smiling today.”

After Keith White took the oath of office from First Selectman Ken Kellogg, he received a standing ovation.

Looking around the room, White said he saw the history of the town and of himself with the familiar faces of people he met years ago when starting his law enforcement career in the 90s, along with those he met recently.

White said he was honored by their support, especially of his wife and family, who are the ones who allow him to leave his house at 2 a.m. or whenever he’s needed. 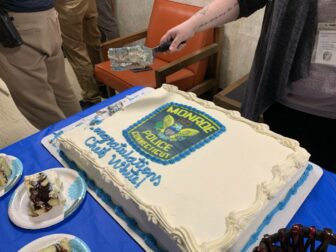 “Without their support, I wouldn’t be able to support you,” White said from the podium, “and I do support you. I think everyone here hopefully knows that. I’m proud of this police department. I’m proud of this town and I hope to be able to help the next generation of officers and employees succeed in whatever they want to do. I’ll be here and I’m honored to be chief of police. Thank you.”

Police Commission members took turns speaking at the podium, along with the first selectman and State Rep. Tony Scott, R-112th. A letter from Town Councilman Terry Rooney, liaison to the Police Commission, was also read into the record.

The event was open to the public and the guests mingled over cake and coffee in the Town Hall lobby following the ceremony.

Changing of the guard 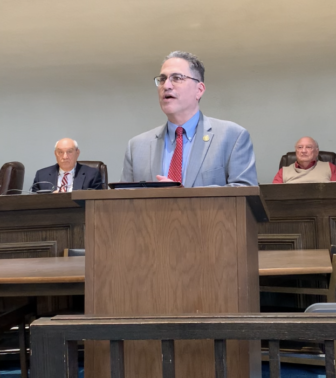 Chief John Salvatore, who had just served his last day on the job, attended the ceremony and the speakers thanked him for his 23 years of service to the town.

Kellogg had many interactions with White in his capacity as police captain and as the town’s emergency management director amid the coronavirus pandemic.

“He’s always been incredibly responsive, eager to resolve matters, and with a consistently composed and professional demeanor that has earned him the respect of others,” Kellogg said of White.

Rather than focusing on problems, Kellogg said White focuses on solutions. “While he certainly delegates appropriately, he also isn’t afraid to roll up his sleeves and take on any job necessary to complete the mission,” Kellogg said.

In one example, Kellogg recalled having conversations with White “at all hours” while waiting for COVID test kits from the state, which were delayed. Early on New Year’s Day, he said White called him to report that the kits had arrived.

“With Capt. White’s leadership, we quickly agreed on a plan and we distributed 3,000 kits in about three hours that very same afternoon,” Kellogg said, “and while Capt. White took command of the operation, as usual, he wasn’t just standing around directing. He was working, whether it was moving boxes, moving tables, setting up traffic cones, you name it. He simply gets the job done.”

“Capt. White’s promotion is an incredible achievement that he has earned and he deserves, and he should be very proud,” Kellogg said. “Today, every member of the Monroe Police Department should also be proud. Today, someone who started as a Monroe patrol officer will have risen through the ranks and will become Monroe’s chief of police.” 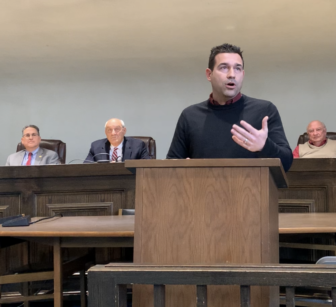 State Rep. Tony Scott, R-112th, vows to be a voice for Monroe’s police officers in Hartford.

Scott vowed to fight to ensure bills proposed in Hartford help police and to protect them from state overreach. He also promised White he will have the same open dialogue with him that he has with the first selectman and Superintendent of Schools Joseph Kobza, who attended the ceremony with Assistant Superintendent Jack Ceccolini.

Hallmarks of an effective leader

Police Commission Chairman Michael A. Vitello said, “finding someone who has the skill sets to take on the monumental task of serving as a police chief is not easy. I believe that we have found the right person in Keith White.” 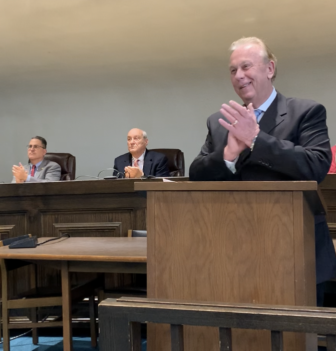 Police Commission Chairman Michael A. Vitello leads a round of applause for Chief John Salvatore, who officially retired Friday.

Vitello called White a masterful communicator, who has knowledge and understanding of every aspect of the police department. Vitello said he and his fellow commissioners look forward to working with White and supporting him.

“Congratulations on being Monroe’s fifth police chief and God bless you, your family and all members of the police department,” Vitello said.

Commissioner Edward Deak Jr. echoed comments by Vitello, thanking Salvatore for 23 years of dedicated service. “The department is the professional, well trained department it is because of his efforts,” Deak said.

Then Deak touted White’s qualifications. “He’s well prepared, experienced, well trained, dedicated and I personally thank him and know he comes to the department with the full support of the commission,” he said.

Daniel Hunsberger, vice chairman of the police commission, thanked Chief Salvatore for “a great job that he’s done for our town.” “He’s taken our department and brought it up to where everybody in town should be proud of the department,” Hunsberger said.

“I’d like to congratulate Chief White on his promotion,” he said, wishing White luck and adding it is nice to see someone who came up through the ranks and dedicated himself to the town be recognized.

“There are many hallmarks of an effective leader,” said Police Commissioner Ron Villani, “and I think one of the most telling is that before the leader leaves, however that happens, he or she has prepared a successor, and not just any successor, but one who is fully qualified to step into the job day one and do it the way it should be done. And for that, I thank Chief Salvatore for his work in developing the new chief, Chief White, to be his successor, and I’m confident that he’ll continue the excellent work that was begun by Chief Salvatore, so congratulations to both.”

Capt. Keith White watches the ceremony before being sworn in as Monroe’s new police chief Friday.

Commissioner David Geismar, who served as a Monroe police officer for four-and-a-half years before transferring to another department, recalled his first day off of field training.

There was a hit-and-run accident on Route 25, Geismar spotted the fleeing vehicle and a chase ensued.

“The vehicle went off the road and was airborne as I was radioing where I was on Route 25, and some expletives might have been spoken on the radio,” he said, as the chamber erupted into laughter.

White was a sergeant that day and Geismar marveled at how he brought a sense of calmness to a crazy situation. “He brings that out of everybody,” Geismar said. “He’s a great leader.”

Geismar read a letter from Rooney who could not attend Friday’s ceremony. Rooney, a former police officer, spoke of the tremendous responsibilities of being a police chief.

“This is not an easy job by any stretch of the imagination, but based on how people support Chief White, he’s is a man that has his peers’ trust and who can lead them to becoming a better and more effective police department,” Rooney said, adding this is a sentiment he and many others share.

“Thank you Chief White for taking on this great responsibility,” Rooney said. “Your own peers support you leading them as their chief and, to me, that’s a higher honor than the position itself.”