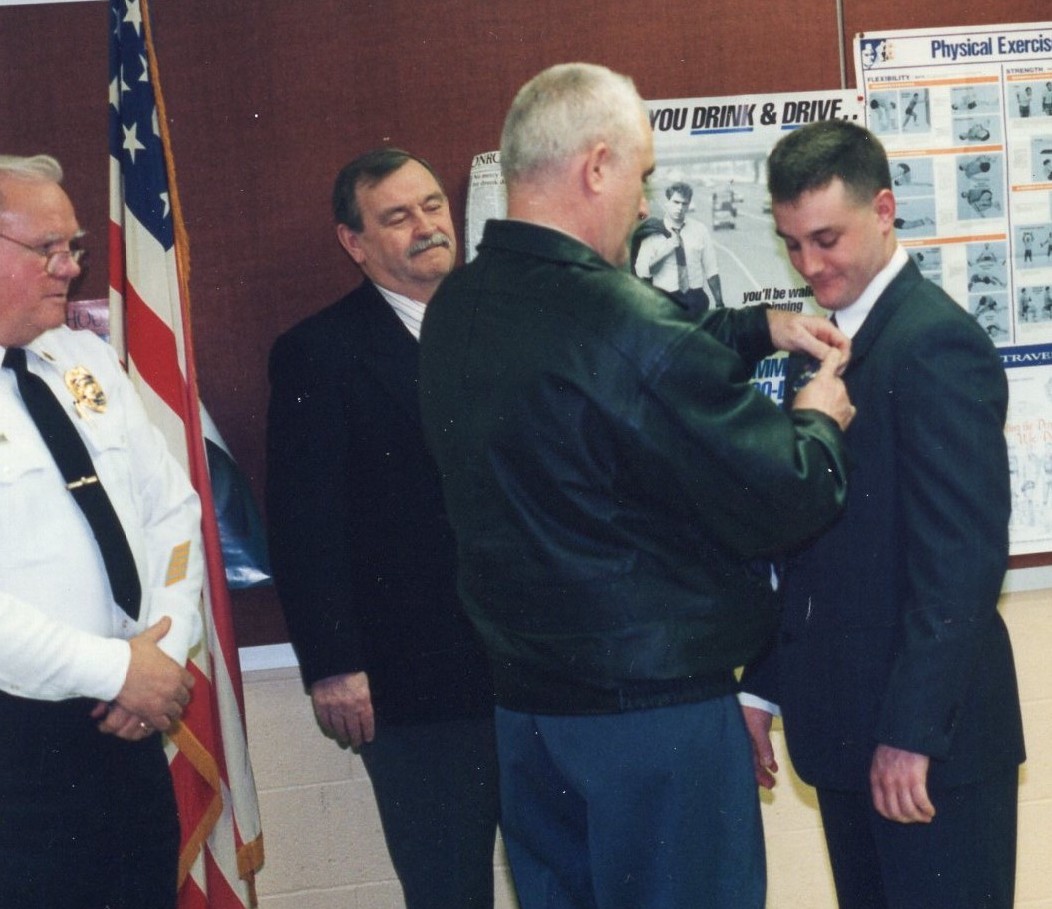 Robert White pins a badge on his son, Keith, during his swearing in ceremony to become a Monroe police officer in 1995. Now 27 years later, Keith White may become the town's new chief. To the left, is the late Monroe Chief Robert Wesche.

MONROE, CT — Keith White wore a dark suit in a photo of his swearing in ceremony, taken on the day he became a Monroe police officer 27 years ago. The picture shows his father, the late Shelton Police Chief Robert White, pinning the badge on him.

Keith White worked his way up the ranks, from patrolman to detective, sergeant then captain. If a contract can be worked out with the town, on Feb. 25, White will become Monroe’s fifth police chief following John Salvatore’s retirement.

It appears that White is following in the footsteps of his father, who had a 32-year-year-career in law enforcement.

“I guess I did mirror his career,” White said during an interview Wednesday. “I’m sure if he was here, he would be proud of where I am today, as am I.”

“I think his father would be extremely proud of him,” said Chief John Salvatore, who was hired by the town in 1998.

White was a young detective when Salvatore became chief and Salvatore said he stood out right away, as an officer who could always be depended upon to get things done.

The Board of Police Commissioners voted to offer White the chief’s job with support from First Selectman Ken Kellogg following an internal search and an interview. The search committee also included Human Resources Director Craig Hirsch and Stamford Police Chief Timothy Shaw, who is a Monroe resident.

If the decision was solely up to Salvatore, he said he would have also chosen White to be his successor. “He’s known by everyone, rather than bringing in an unknown,” Salvatore said, “and it opens up promotions under him.”

Robert and Sandra White raised their two sons, Robert and Keith, in Shelton.

“I grew up in a police family,” Keith White said. “I always heard stories and understood the lifestyle and commitment it took. I thought it would be a good fit for myself.”

Aside from his father, White’s uncle, Marty White, was a major crime detective for Troop F.

While White went on to become a police officer, he said his older brother, Robert, embarked on a different career path. “He sells dynamite,” White said with a smile.

White graduated from Shelton High School and enrolled at Curry College in Milton, Mass., where he earned a degree in psychology and communications.

His first job out of college was as a court sheriff in Bridgeport. White brought prisoners from lockup to their arraignments. While working there, White was training to be a police officer. “I learned a lot, but that was my ultimate goal,” he said.

White is a married father of three. 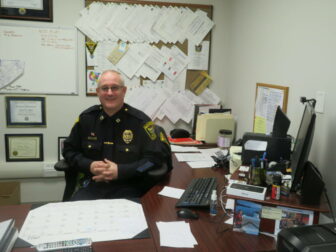 When White started his career in town the Big Y supermarket was new, and the town still had Walter Stewart’s Market and the Monroe Supermarket. Overall, he said a lot has changed over the years.

“We made strides,” he said of the advancements of the police department.

Salvatore recalls how the Monroe Police Department earned Connecticut Police Officers Standards and Training Post Council’s Police Accreditation status, and has maintained its three tier accreditation. The department also made advancements in its use of forensics and computer forensics.

The department has a capacity for 42 full-time officers, and has 11 full-time civilian employees and some part-time employees.

White started out as a patrolman before being promoted to sergeant, then becoming a detective/lieutenant six years later. He was promoted to captain six years ago after Michael Flick retired.

“I like the people,” White said of law enforcement. “The job’s almost completely about relationships — with people inside this building and in the community.”

He organized police officers to arrange for security, ensuring the safety of students and staff, and communicated with the media, while officers kept reporters off the school campus.

Two years ago, White assumed the role of emergency management director for the town. At the height of the COVID-19 pandemic, he led the setting up of testing clinics, then vaccination clinics and arranged for home test pickups.

At least 25 police officers attended the Police Commission meeting on Feb.1 to support White’s candidacy for police chief and White received a standing ovation after the commission unanimously decided to offer him the job.

“I was honored at how many people showed up for my effort,” White said. “I was shaking a lot of hands. It was greatly appreciated. It’s good to know I have the support of people in the police department and I hope I have that support in the community, as well.”

As Monroe’s new police chief, White plans for the department to continue staying up-to-date with education and training, while always moving forward.

“It should be a very smooth transition from Chief Salvatore to myself,” he said. “I hope people don’t notice the change at first.”