A New Hampshire man was hiking with his family in Kensington last month, when a coyote attacked his two-year-old son. Ian O’Reilly kicked the coyote, but when it kept fighting, biting him twice, he strangled it to death.

While Monroe has an active coyote population, encounters with humans are not that extreme. And though the behavior displayed  in New Hampshire is not typical, to educate residents, Monroe Animal Control Officer Ed Risko shared an article by Jaymi Heimbuch entitled, “What to do if you encounter a coyote while walking your dog.”

Heimbuch says coyotes are rarely interested in humans, but can see big dogs as competition and small dogs as prey.

When walking your dog in coyote territory, he recommends keeping your pet on a six-foot non-retractable leash, which is long enough for some freedom, but short enough to gain control of your dog if you have to.

If you have a small dog, he recommends carrying it, so it does not run away or engage a coyote.

Breeding season is between the months of February and July.

Heimbuch said to stick to trails and open paths, while avoiding areas with thick brush. This makes it less likely to encounter a coyote and leaves more time to react if you see one.

Heimbuch also says to avoid walking your dog at sunrise and sunset hours when coyotes are more active.

If you encounter a coyote, he said to maintain eye contact, do not turn your back on the coyote and do not run. Running away can trigger a coyote’s prey drive and may cause it to chase you, according to Heimbuch.

Stay tall and assertive as you leave the area, even if it means walking backwards, he said.

He said to haze the coyote until it leaves the area. Hazing can include “yelling, stomping your feet, shaking a jacket, using a noise maker, popping an umbrella, flashing a flashlight, tossing rocks or branches at the ground” to frighten the coyote off.

“This may come easy to some but to others seem abusive or unkind,” Heimbuch wrote. “But every coyote advocate will agree, the kindest thing you can do for a coyote is to scare it away, especially if he or she is overly curious about dogs. Keeping up a coyote’s natural fear of humans is the only way to keep urban coyotes alive, for a coyote that becomes too brazen is sure to end up euthanized.”

Heimbuch said to report overly brazen coyotes, who come too close, follow you for too long or do not respond to hazing.

When a brazen coyote is reported, Heimbuch said there is a good chance it can be hazed by city officials to reverse its behavior, so the animal does not have to be removed.

Risko often warns residents not to leave food out in their yards, because it attracts wild animals and can make them too comfortable being near humans. This also means picking up fallen fruit, securing trash and keeping grills clean.

To further protect your pet, Heimbuch recommends not leaving it outside alone, especially at night. 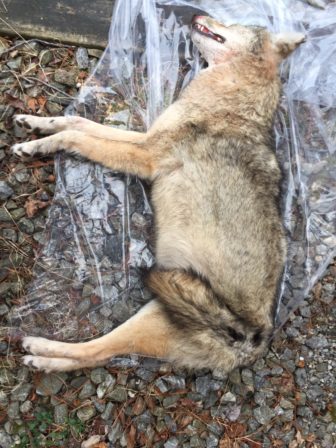 This coyote was struck by a vehicle on Main Street. Contributed

A man reported seeing a coyote in his driveway on Blanket Meadow Road at 9:06 p.m., Tuesday, Jan. 21.

A site inspection was performed, an activity report form completed and a species fact sheet with common cautions and hazing tips were provided.

Risko said an officer removed the body of the adult female coyote for cremation, adding it weighed 30 pounds.

A volunteer at SPCA of CT, 359 Spring Hill Road, reported being bitten by a four-year-old female English Bulldog surrendered by its owner on Jan. 31.

The victim, a 48-year-old woman, suffered a physical injury to her leg and hand and sought medical attention on her own, according to Risko.

The dog, which was validly vaccinated for rabies and licensed, had no previous history of aggressive behavior, Risko said. A 10 day quarantine order was issued with a veterinary health examination scheduled for three days prior to release.

SPCA of CT agreed not to offer the dog to the general public for adoption, Risko said.

A resident reported hearing what sounded like a woman screaming for help in the area of Route 110 and Whitney Farms Golf Course late on Sunday night, Jan. 19.

Officers responding to the 11:43 p.m. call searched the area, but were unable to find anyone nor a vehicle. The caller was later asked to listen to recordings of “Red Fox” vocals from the Internet and confirmed that was what she heard, according to Risko.

A species fact sheet with common cautions was provided and the woman was given a verbal warning for failure to license her dog.

Risko said foxes are not dangerous to humans, except when they are rabid — which is very rare — or when they are captured and handled. A fox’s natural tendency is to flee rather than fight.

However, small pets or livestock, such as rabbits, guinea pigs or chickens, should be kept indoors or housed in sturdy structures because foxes may prey on them.

Foxes may den under a porch, deck or shed, according to Risko. Fox kits are born in the spring, usually in March or April, and you’ll see them emerge from the den four or five weeks after birth.

Risko shared this information, “if you find a fox family in an inconvenient spot, consider allowing them to stay until the young are old enough to begin accompanying their parents on foraging outings. At this point they are nearly ready to say goodbye to the den site and move on for good.”

At nine weeks, they will begin to hunt with their parents, Risko said, adding that is the safe time to encourage their departure from the den site with mild harassment to scare them away.

A woman driving on Main Street on Jan. 21 reported seeing an injured red tail hawk near Stanley Road, but police said the bird died before an officer’s arrival and its remains were removed for cremation.

“If the bird was recovered alive, we would have transported it to one of the state licensed volunteer wildlife rehabilitators who handle raptors,” Risko said.

Among the examples of rehabilitation facilities Risko gave were Wildlife in Crisis, Christine’s Critters and A Place Called Hope. According to A Place Called Hope, these birds tend to eat about four large mice daily, while in captivity — at a cost of approximately $672 per year.

Vehicle strikes are a major cause of injuries to birds of prey, such as hawks, eagles and owls, according to Providence Raptors, which says these birds prefer to hunt near open roads, where prey is easier to find than when running through a grassy field.

“Unfortunately, this situation leads to hawks being injured or killed in collisions with cars,” Providence Raptors says. “Once the hawk targets its prey, it is completely focused on the meal and does not see cars coming from the sides.”

People can reduce these incidents by not littering on the highway. For example, an apple core tossed out of a car window will attract a rodent, which in turn will attract a hawk, the organization says.

Monroe Animal Control reports that a large number of bald eagles were seen on the ice, approximately 200 yards opposite of Lake Zoar Drive-in on Route 34, on Tuesday, Jan. 28, at around 9:53 a.m.

An activity report form was completed.

Bobcat sightings were reported on Monday, Jan. 20, when a male driver saw one crossing Main Street, near the intersection of Crescent Place, and on Saturday, Jan. 25, when a woman reported seeing a bobcat in her yard on Wells Road.

In both cases, a species fact sheet was provided to the caller and a site inspection was performed.

The Connecticut Department of Energy and Environmental Protection keeps track of sightings of bobcat, black bear, fisher cat, moose, ruffed grouse and wild turkey broods. If seen locally in Monroe, call the field office at 203-452-3760 to speak with an officer. Photos may be sent via email to [email protected]

A Trumbull man was issued an infraction for fishing without a license at Great Hollow Lake on Tuesday, Jan. 28. The offense carries a $154 fine.

A woman reported finding an injured cottontail rabbit that had been struck by a vehicle on Bagburn Road Tuesday, Jan. 28.

Police said she captured and transported the animal to the Animal Control Unit Field Office, where an officer assessed the injuries and took the rabbit to the DEEP Licensed wildlife rehabilitor, Wildlife in Crisis in Weston, for continued care.