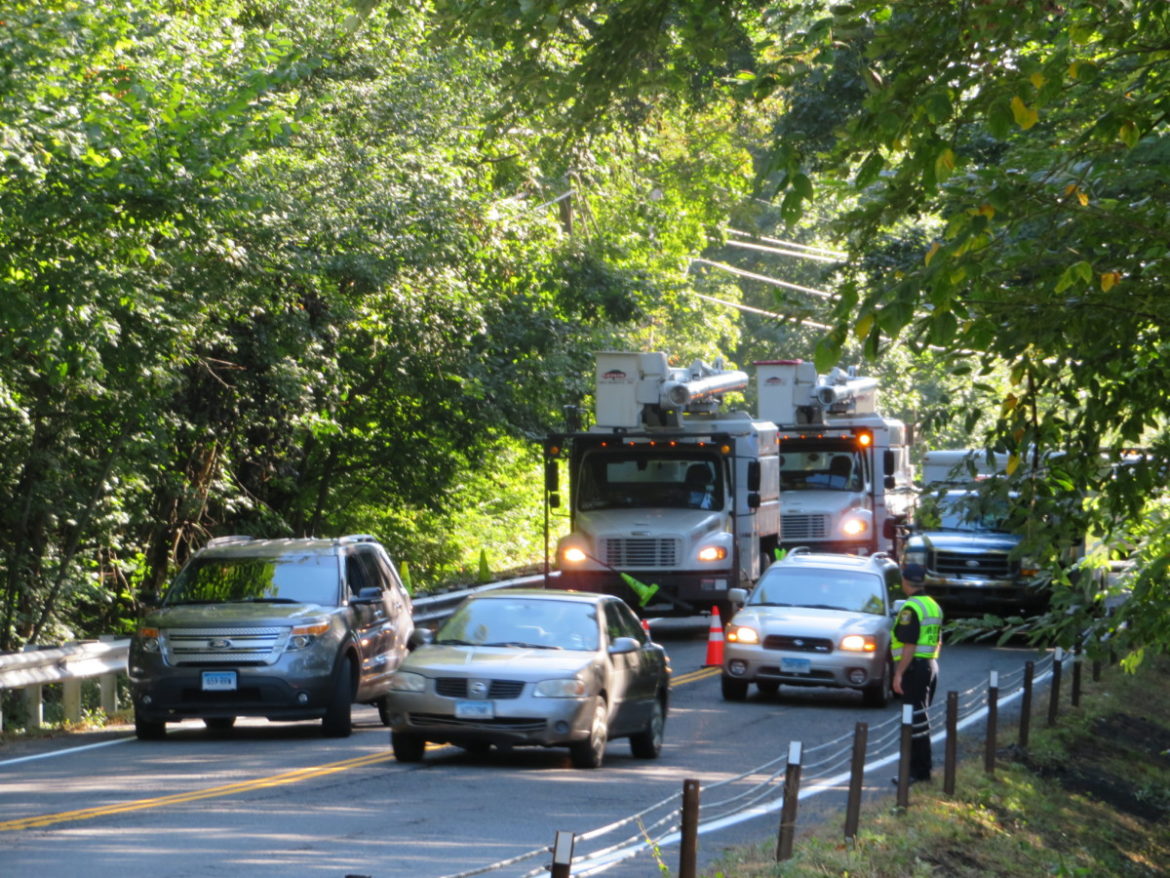 Lewis Tree Service is trimming back trees along Route 110 from Old Tannery to Wheeler roads.

Lewis Tree Service trucks lined Route 110 Thursday morning as its crews trimmed back trees from Old Tannery to Wheeler roads. Police officers directed traffic, which was closed to one lane.

Police Capt. Keith White said the work started around 7:45 a.m. and was being done in response to a recent increase in accidents involving vehicles turning onto Shelton Road (Route 110) from the south side of Wheeler Road.

“From analyzing the recent accidents, a new trend was noticed with the south-bound vehicles on Wheeler being involved in accidents,” White said, while directing traffic. “That rarely happened. The vast majority of accidents were from north-bound vehicles over the last 20 years.”

Wheeler Road at Route 110 is notorious for being one of Monroe’s most dangerous intersections, and despite town officials adding pavement markings, stop ahead signs, removing trees and installing a larger flashing stop sign on the north side of Wheeler, crash statistics continue to pile up.

White said there were 69 crashes at the intersection since 2000, many resulting in serious injuries and two with fatalities. Of seven accidents in 2019, three involved vehicles coming from the south side of Wheeler.

Police contacted the Connecticut Department of Transportation, which determined the town should do the trim work, because the issue involves a town road, according to White.

He said police and the highway department applied to the DOT for an encroachment permit needed to perform the work and made arrangements to hire Lewis Tree, an Eversource certified vendor, due to the power lines in the area.

“It’s all trim work of existing trees and the state highway came this week and trimmed away all the low brush,” White said. “We hope the outcome will be a reduction in future accidents involving south-bound vehicles.”

First Selectman Ken Kellogg is tied up with morning meetings and could not immediately comment, but he had informed The Sun the tree work would be done.

In a recent article on the issue, Kellogg said the town continues to work with the DOT to improve the intersection. “We’re doing everything in our power to reduce or eliminate crashes there,” he said.

White said the DOT has yet to schedule a time to meet with him about the intersection, but the town, on its own, determined the sight lines could be improved. He expected Thursday’s work to be done by approximately 1 p.m.