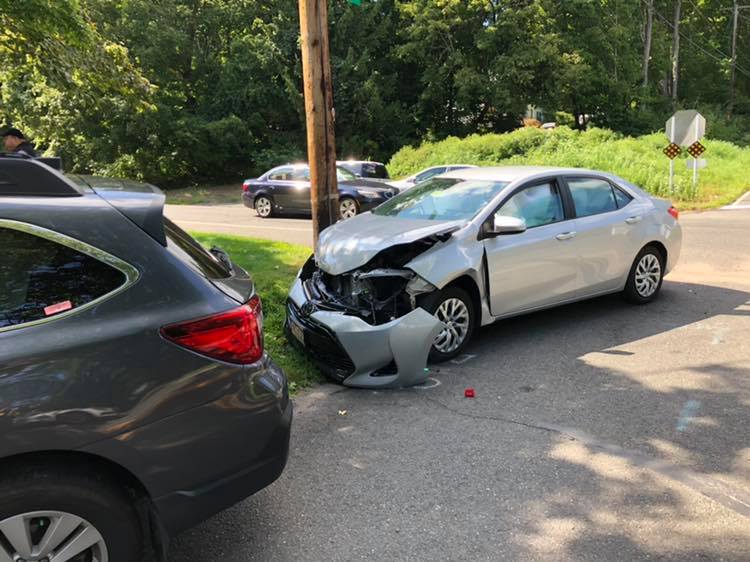 This photo of a 2019 crash between a silver Toyota Corolla and a Subaru Outback at the intersection of Wheeler and Shelton Road was shared on the Monroe Volunteer Fire Department, No. 1 Inc. Facebook page.

Wheeler Road at Route 110 is notorious for being one of Monroe’s most dangerous intersections, and despite town officials adding pavement markings, stop ahead signs, removing trees and installing a larger flashing stop sign on the north side of Wheeler, crash statistics continue to pile up.

Police Capt. Keith White says there were 69 crashes at the intersection since 2000, many resulting in serious injuries and two with fatalities.

“There were seven accidents there in 2019 and we’re only in August,” White said during an interview in the Monroe Police Department conference room Wednesday. Glancing at his notes on the table, he added, “we don’t have a three-ring-binder on any other intersection in town.”

However, White said town efforts to mark the intersection and improve visibility from the north side of Wheeler Road eliminated the optical illusion that caused serious high speed crashes in the past.

Because Shelton Road (Route 110) is below the level of Wheeler Road, it appeared that Wheeler runs across Route 110 without interruption. But now White said drivers are stopping at the stop sign on the north side.

“It’s gone from a design issue to a driver behavior issue,” he said of the problem.

Now, the crashes involve one car entering the intersection from a stopped position and another driving fast on 110, rather than higher energy impacts from both vehicles going fast, according to White.

“They’re more frequent and less serious,” Chief John Salvatore said of the severity of injuries. “But that doesn’t mean we’re taking it any lighter. The frequency is still too high and any injury is too many.”

Salvatore said police continue to work with traffic engineers from the Connecticut Department of Transportation to determine if there are any other ways to improve safety at the intersection.

White said DOT traffic engineers have assessed the intersection twice, adding he is arranging to meet with them a third time for another evaluation. “They will look at all the current conditions and counter measures,” Salvatore said. 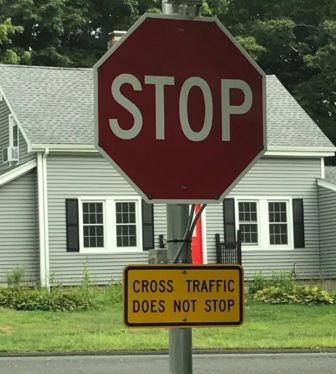 After two crashes in March, when one driver told officers he thought it was a four-way-stop, the town added this, “Cross traffic does not stop” sign to the stop sign on the north side of Wheeler Road at Route 110. Contributed

The town had two recent crashes in a seven-day-span.

At around 2:45 p.m. on Tuesday,  the driver of a gray Subaru Outback heading south on Wheeler Road, stopped at the stop sign, thought Route 110 was clear, entered the intersection and was struck by a silver Toyota Corolla  heading west on 110 causing minor injuries, according to White.

“Most of these collisions are in the daytime,” he said.

On Aug. 13, the driver of a blue Toyota Corolla heading south on Wheeler, stopped at the stop sign, then pulled out without yielding to traffic on Route 110, according to White, who said the car was struck by a gray Subaru Impreza heading east. White said there were no injuries. 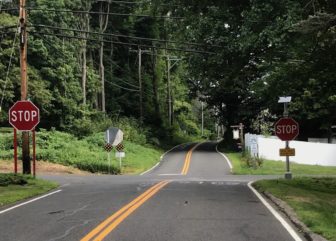 “The police department does investigate all these accidents,” First Selectman Ken Kellogg said Wednesday. “We are taking it very seriously. They are reporting the accidents to the DOT. The DOT agreed to take another fresh look based on the new information.”

“Before it was the optical illusion and that is not the issue,” he added. “They’re also taking a fresh look at sight lines, particularly on the south bound side of Wheeler Road since there were more accidents from there.”

Kellogg said he has seen residents on social media propose solutions, from adding a four-way-stop to eliminating the intersection all together.

According to police statistics the intersection of Moose Hill Road and Route 110 has had 78 crashes since 2000, which is 9 more than the Wheeler Road intersection. This is despite having a four-way-stop with red flashing traffic lights in the intersection.

“Unfortunately, what may appear to be a simple solution could have unintended consequences,” Kellogg said. “We need to look at the recommendations from the traffic engineers. It’s a science. It needs to be evaluated all the time.”

The first selectman said the town will pursue any potential solutions the DOT traffic engineers may offer to improve safety at Wheeler and 110, adding, “we’re doing everything in our power to reduce or eliminate crashes there.”

Editor’s note: An error in the description of the accident between the Outback and the Corolla was corrected.