“I think it was a very seamless and efficient budget process this year,” First Selectman Ken Kellogg said after the meeting. “At least in my perspective, I think everyone continued to work together in a very efficient and effective way, so I appreciate the hard work.”

The Town Council voted on a series of small adjustments, including a $500 cut for office expenses in the fire marshal’s office, a $3,904 increase for Emergency Management’s operating expenses, and a $774 cut to health office expenses. 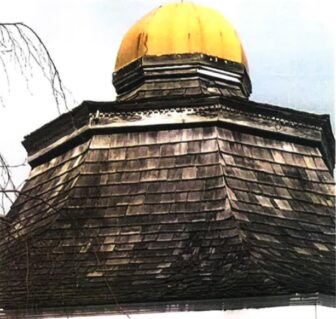 Public Works Director Chris Nowacki said the roof of the Town Hall Gazebo is in disrepair and needs to be replaced.

After previous discussions on the condition of the gazebo, Public Works Director Chris Nowacki wrote a memo to Kellogg on March 1.

“The cedar shingles are clearly deteriorated, warped, and dry rotted and many are missing exposing the underlayment,” Nowacki wrote. “The upper fascia, trim and dome show noticeable signs of deterioration and rot. I recommend a complete removal, inspection and replacement of the entire roof system.”

Proposals were obtained following Town Hall’s Purchasing Policy for the scope of the work, which includes replacing the roof, dome and trim, and repairing the bluestone steps and brick walkway.

Kellogg asked the Town Council to allow up to $20,000 from the Cornelia H. B. Rogers Memorial Fund to be used, with any money left over going back into the fund.

Before coming before the Town Council, Kellogg said Nowacki had gotten approval for the gazebo project from the Monroe Historic District Commission.

The Town Council approved a resolution for the funding by a vote of 8 to 0.