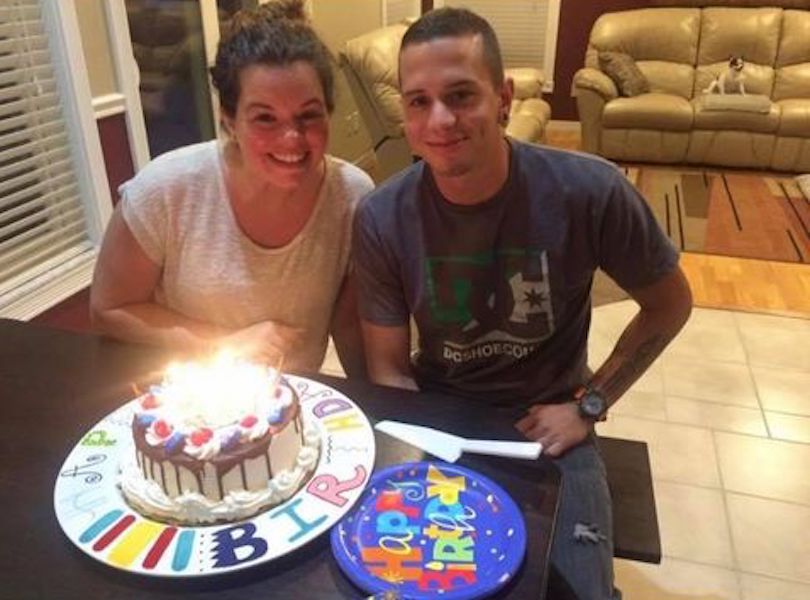 Vanessa Shimer, left, and her late brother, James Karcher, celebrate their birthday, when she turned 28 and he turned 25.

MONROE, CT — James Karcher loved spending time with family and friends, going to the beach or taking a dip in a pool, while growing up in Monroe. The athletic teenager also enjoyed bike riding, skateboarding and was even talented on a unicycle, according to his sister, Vanessa Karcher-Shimer, who now lives in Shelton.

The close siblings shared the same birthdate, though Shimer had three years on her little brother, and both went on to graduate from Masuk High School, where James played on the lacrosse team for a time. It was during his high school years that James’s bright future began to dim.

James experimented with prescription medication, sparking a habit that led to illicit drug use. Numerous times, he tried to overcome his powerful addiction with the support of his sister and loving parents, Jim and Ruth, but James’s 10 year battle came to an end on Aug. 17, 2019, when he overdosed on fentanyl. He was 28-years-old.

“He really wanted treatment,” Shimer said. “He did not want this lifestyle. He wanted to be free of this disease that so many struggle with. My brother always felt invincible — on good days and bad days. He never wanted to die, but he was not invincible to his disease, which won out in the end.” 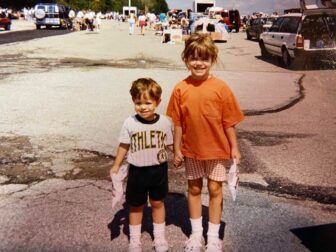 Vanessa Karcher-Shimer holds her little brother James’s hand when they are kids.

The national opioid epidemic has led to rising numbers of fentanyl overdoses, which claimed the lives of 36,000 people in 2019.

During a dark period of grief, Shimer learned about Shatterproof while listening to a podcast. The national nonprofit organization is dedicated to reversing the crisis of addiction in the U.S.

“I become a Shatterproof ambassador and now serve as a member of the junior board of advisors,” Shimer said.

Shimer works at Griffin Hospital and she and Brian, her husband of nearly five years, have a two-year-old daughter and are raising James’s daughter, who is now four. Shimer has dedicated her life to raising awareness of substance abuse addiction and ending the stigma.

On Saturday morning, she will run in the Shatterproof Rise Up Virtual 5K. Aside from her family, Shimer’s best friend Crista Whiteman, also a Masuk alumna, will run alongside her. They will meet at the entrance of the Derby Riverwalk near BJ’s Wholesale Club on Division Street at 8:30 a.m.

As of 5 p.m. on Wednesday, Shimer was well above her fundraising goal of $1,000, with donations for Team James totaling $2,720. To visit the page to register or make a donation, click here. 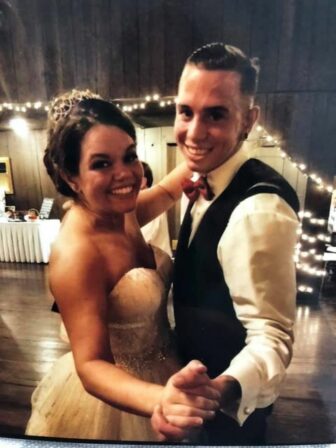 Vanessa Shimer dances with her brother at her wedding.

Shimer said all of the funds raised will go toward Shatterproof’s mission of supporting advocacy efforts, providing trusted, evidence-based resources for families, and helping to end the stigma of addiction.

Shatterproof works with legislators to influence public policy to promote quality treatment for those suffering from opioid addiction, so they can be assessed by their primary care doctor to find the best treatment for them.

Gary Mendell, founder and CEO of Shatterproof, started the nonprofit after he and his wife lost their son, Brian, in 2011. Brian had fought to overcome his addiction for 10 years.

Shatterproof’s website includes a quote from Brian about the stigma drug addicts face: “Dad, 300 years ago, they burned women on stakes in Salem, Massachusetts because they thought they were witches. Later they learned they weren’t and stopped. Someday, people will realize that I am not a bad person. That I have a disease and I am trying my hardest.”

Shimer said she believes communities and schools are not acknowledging the true magnitude of the problem in their midst.

“Growing up in Monroe, we had a beautiful town, nice schools, families and cars,” she said. “But in the schools it was like drug addiction was swept under the rug. People don’t know how to approach this. They don’t think it’s a disease and it’s unfortunate.”

Masuk has an annual forum on underage drinking and drug abuse, but Shimer said even more should be done to promote a continuing conversation to help teens who are struggling in high school. 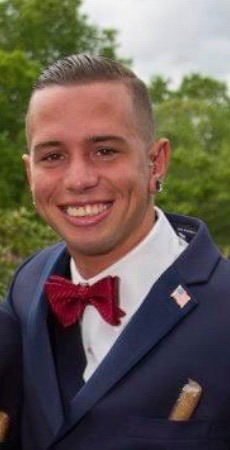 “My brother feared being stigmatized,” she said. “My brother didn’t have a lot of support from the medical field and the school system, and I think other things could have been done to help him. I would like to see school systems in our communities get on the other side of it and help fight it. There are a lot of things going on in people’s lives, where they present with a smile and you don’t know what’s going on.”

James Karcher was never stigmatized in his sister’s eyes. In fact, Shimer said she will channel her brother’s strength to get through the 5K this Saturday.

“He was my best friend and he was the day he passed,” she said. “I did everything to protect him and I always will, even though he’s not here — and I’ll always be proud of the fight that he fought.”