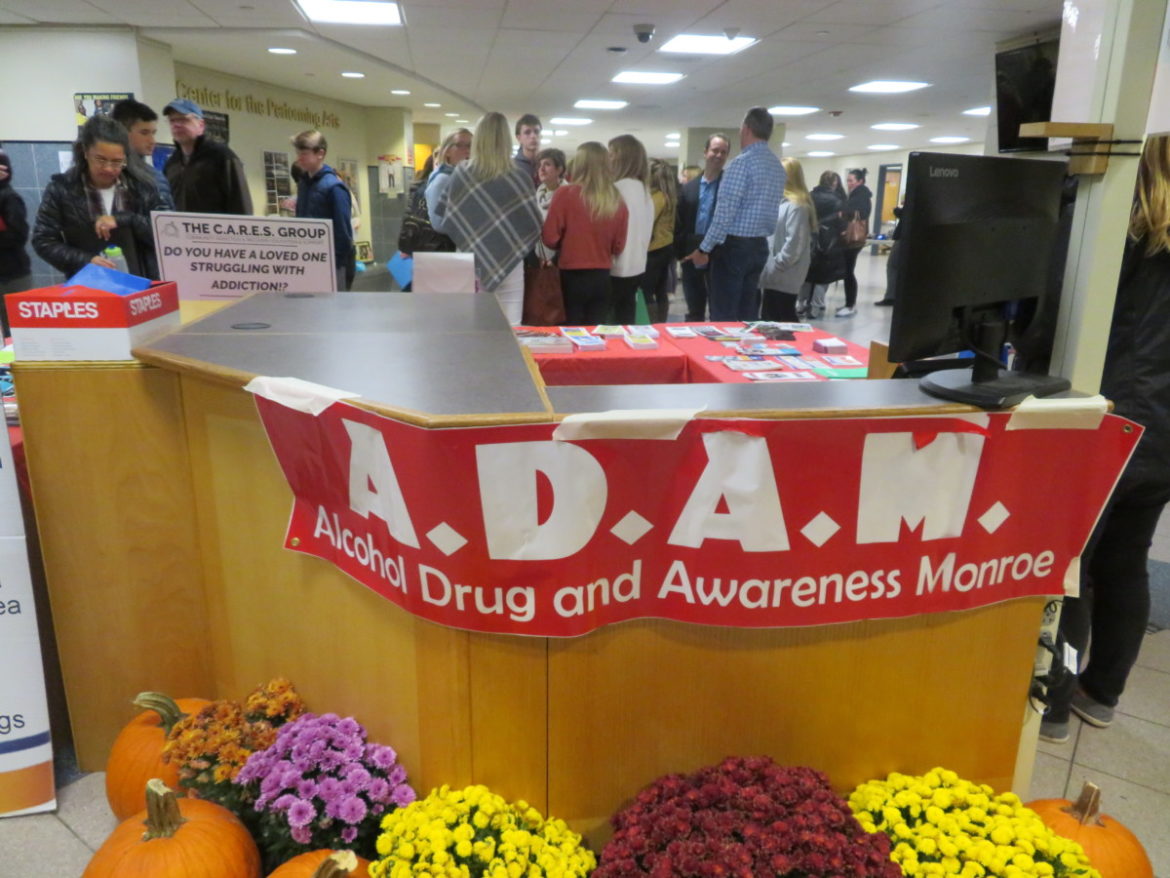 Masuk High School's annual forum on underage drinking and substance abuse was last held live in 2019, but has been accessed on YouTube since then due to the COVID-19 pandemic.

Teenagers choosing to host a party and to vape or smoke at school face a minefield of risks. Negative consequences can include a deadly crash from drunken driving after the party, making the parents legally liable. The teen possessing the alcohol can be slapped with fines and a suspended or delayed driver’s license and, in the case of vaping, be hit with a school suspension.

If that doesn’t give teenagers pause, a “short, fat, bald Teddy Bear” may do the trick.

“I’ve been described as a short, fat, bald Teddy Bear,” Attorney Thomas Tesoro told a packed auditorium of parents and students at Masuk High School Wednesday night. “But inside me is the black heart of a lawyer.”

If a teenager drinks and drives and harms Tesoro’s client, he said, “I will be relentless. I will be vicious in seeking justice for my client. I will make sure your savings are wiped out, that your college fund is wiped out.”

Tesoro was one of the featured speakers at “Have the Conversation,” the 10th annual forum on underage drinking and substance abuse hosted by Alcohol and Drug Awareness of Monroe (ADAM) at the high school Wednesday night.

“Thank you to all the guardians tonight,” Principal Dr. Jacob Greenwood said from the podium. “Parents, you are the biggest influences on your children. Please use this to start a dialogue on drinking, drugs and making the right decisions.”

Superintendent of Schools Dr. Jack Zamary noted how all teenagers make mistakes, but said the intent of the forum is that they avoid the life altering ones.

Among the speakers were Police Chief John Salvatore; Donna DeLuca, the co-founder of Community Addiction & Recovery Education & Support (C.A.R.E.S.); Ann Dyke, a registered nurse and the injury prevention coordinator for Yale New Haven Health at Bridgeport Hospital; Allison Kernan, a national motivational speaker who shared the story of her recovery from substance abuse and trauma; Jessica Champagne, a social worker for the school district and the town; and Masuk Assistant Principal Mark Schwarz.

Salvatore said police officers respond to calls of house parties where minors have had to get their stomachs pumped from alcohol poisoning. They have arrested teenagers for possession of alcohol by a minor and arrested homeowners where a party was held.

There have been DUI crashes involving teenagers leaving a party and a day or two after a party, Salvatore said police sometimes receive complaints of a sexual assault.

Dyke shared horror stories of the hospital operating room, when people were brought in with alcohol poisoning or after being involved in a serious DUI crash.

She urged parents to have an agreement with their child that they can call them for a ride home whenever they’re in trouble, with no questions asked and no anger or judgement.

Dyke recalled a time when she and her husband picked up their son. “We took him and his friends home,” she said. “I just wanted to save a life.”

Salvatore showed slides of strict state laws. A minor in possession of alcohol is hit with a $136 fine or a summons to Juvenile Court for a first offense. A second offense leads to an arrest, a court appearance and a fine not less than $200 and not more than $500.

The minor’s driver’s license is also subject to suspension by the Department of Motor Vehicles.

Social Hosting laws can make parents, as the homeowners, legally responsible for hosting a party in which minors are consuming alcohol, even if they are not present. Violation of the law is a Class A Misdemeanor.

Anyone supplying alcohol to a minor can be charged with risk of injury to a minor.

Salvatore said it is now illegal in Connecticut for people under age 21 to purchase or possess tobacco or nicotine products and electronic cigarettes, including vape juice. A first offense includes a $50 fine and each subsequent offense a $100 fine.

A minor could receive a written warning with no fine, but the DMV could still suspend or delay their license, even if driving was not involved.

Store owners are subject to stiffer fines, ranging from $300 to $700, for selling these products to minors.

Salvatore said the police station has a drop box for unwanted or expired prescription drugs and he shared resources for young people, including names and contacts for Masuk’s School Resource Officer Brooke Larsen and Youth Detective Nicole Buckley, the MPD Tip Line and the phone number for police dispatch.

Allison Kernan suffered abuse at the hands of her father, who had an anger disorder. He also abused her mother, who divorced him. Kernan’s older brother, who she saw as her protector, became a target of her father’s abuse later in life.

Kernan lived in a loving home Monday through Friday, but spent the weekends with her abusive father.

“I hid a lot,” Kernan recalled. “I didn’t tell my mother. I had a burden of not wanting to be a burden. I kept things hidden. I tried to be the brave one, to face it. But it was destroying me inside, adding more wood to the fire.”

Her brother was popular in high school, before becoming addicted to crack cocaine. “I loved my brother regardless,” Kernan said. “I believed I had the power to help.”

Kernan struggled with the trauma and low self esteem, but vowed not to succumb to drugs and alcohol because of what it did to her brother. But friends kept telling her to smoke a joint to take the edge off.

“I reached out to unhealthy things,” she said. “I saw other drugs working well for people. When my father smoked marijuana, he wasn’t hitting me. My brother was more confident. I started to smoke on weekends.”

Kernan set guidelines to drink and smoke responsibly. “I’m here to tell you I did everything I vowed I would never do,” she said. “Addiction took everything from me. I lost my home, my dignity, my self esteem. By age 21 I was a convicted felon and went to jail for a year.”

But Kernan cleaned up and now works as a recovery liaison for Recovery Network of Programs, Inc. “I’m closer than ever to my mom,” she said. “I put all my heart and soul into recovery.”

Donna DeLuca, a Masuk graduate, educator and mother of four, used to think the problems of substance abuse wouldn’t happen to her family — until it did. What her family didn’t know was, two of her sons were predisposed to addiction.

“None of us knew what to do about our beautiful boys,” DeLuca said. “Each played sports and was involved in the community. We had family dinners.”

But young people often do not feel comfortable in their own skin, and all of them should have a trusted adult in their life who they can talk to, DeLuca said.

“What I know now is, if you have a genetic claim to addiction in the family, there is a stronger chance of alcohol and substance abuse,” she said. “Once my boys took their first drink, unbeknownst to them and us, it triggered their addiction.”

At first, DeLuca said her sons believed drinking made them more social. They could talk to girls and they felt like they were more fun.

“Each kid went on a 10-year roller coaster ride that took them to the darkest, scariest places,” DeLuca said, adding one son went to jail and attended too many funerals of friends who died young from their addictions.

DeLuca said there is an incredible stigma around addiction that can be a barrier to seeking help and talking about it with others. She started six C.A.R.E.S. support groups with the closest ones in Trumbull and Shelton.

She expressed her belief that open communication can stop addiction before it starts.

“Kids, talk to your parents about what you feel inside on the way home,” DeLuca said. “They will be open to it. Parents, promise to remain calm over what they may tell you.”

She also encouraged students to find a passion and pursue it and their parents to support them, even if it’s not what they envision for their child.

Jessica Champagne shared tips for parents to establish a closer relationship with their children, including asking them open ended questions to encourage deeper discussions.

While Champagne said there should be reasonable consequences when a teenager breaks family rules, which parents should stick to, she added parents should also try not to be judgmental and to control their emotions when talking to their children.

Among the facts she shared, “teens whose parents talk with them regularly about drugs and alcohol are 42% less likely to use substances than those whose parents don’t.”

Champagne said parents should know where their kids are going and who they are with and to create a community of parents with like-minded expectations.

When hosting a party, parents should make sure there is no alcohol, tobacco or other drugs and be there to supervise without being in the way, make sure their child sticks to the guest list, that no one leaves the party and comes back, that certain rooms in the house are off limits and lights are left on at all times.

“Don’t be the ‘cool’ parent for the wrong reasons,” Champagne said.

She said parents also need to assess their own behaviors and to be good role models.

Though vaping has been illegal for people under 21 in Connecticut since Oct. 1, Masuk Assistant Principal Mark Schwarz said the product is marketed to children with flavors like marshmallow, grape and tutti fruity.

“It’s a problem for Masuk and the rest of the country,” he said.

Schwarz showed a photo of vaping products confiscated from students, so parents know what to look for. They can be difficult to spot. For example, Juul devices resemble a small USB drive that can be charged in a laptop.

“I will search backpacks if I have a suspicion,” he said.

A first offense for a student caught with vaping devices, e-cigarettes or tobacco products is an in-school suspension. All subsequent offenses carry progressive disciplinary action.