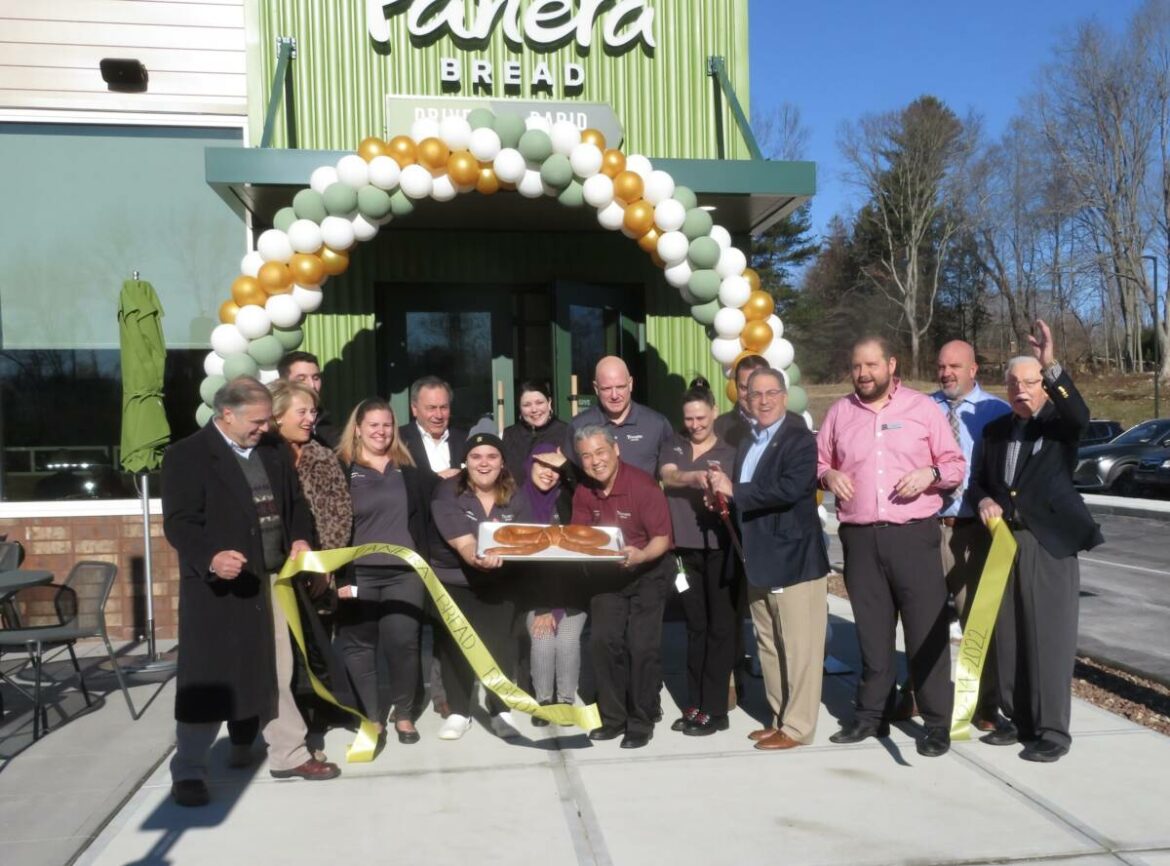 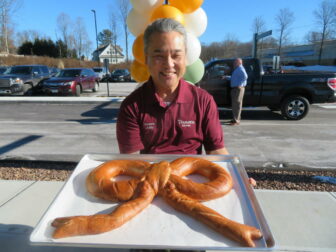 Harold Turocy, assistant general manager for Panera Café, holds a baguette shaped as a ribbon during the grand opening of the new location at 205 Monroe Turnpike.

The restaurant has two dual order lanes, merging to one lane behind the building. Panera is redesigning all of its restaurants to be standalone facilities. Monroe’s is the second Panera Café to open in the nation. The first was in St. Louis, Mo.

“We’re looking forward to being part of the community in Monroe,” said Joshua Webb, area manager of Panera. “All of our managers strive to be in touch with our local community.”

Webb said Panera Bread Café will be a member of the Monroe Chamber of Commerce and a business that is supportive of community causes. He said the restaurant donates its leftovers to soup kitchens and other charities to fight hunger.

Jamie Hill, training manager of Panera, was called in to prepare the staff for operations in Monroe. A pro team came in for a training week before the opening.

“They help set up the café,” said Rita Selleck, general manager of the Monroe restaurant.

The Monroe location has 40 employees and six managers, but is still hiring. Those interested can apply online, visit the café or call 1-475-231-6616.

Years in the making 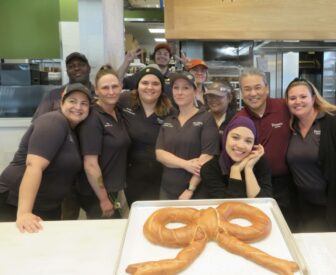 Rita Selleck, front row, second from left, general manager of the Monroe Panera Café, poses for a photo with her team. Jamie Hill, training manager, is pictured on the far right.

Kevin Solli, founder and principal engineer of Solli Engineering, presented the proposal for his client while garnering land use approvals from the town.

Following intense debate over the architectural design, which some commissioners wanted to have a more New England style, a 3,245-square-foot Panera Bread building with a 480-square-foot patio, 49 parking spaces and a drive-thru with a preview board and a menu board was approved by the Planning and Zoning Commission by a vote of 3-2 in January of 2020.

But then construction stalled amid the COVID-19 pandemic.

In July of 2021, First Selectman Ken Kellogg announced Panera was rebranding its restaurants to make every location a standalone Panera Café and a deal was struck with Mike Schinella, a developer and the owner of the property, to get the project moving again and bring a Panera to Monroe.

In March of 2021, Schinella came back with a modified proposal for a Panera Café and the Planning and Zoning Commission issued an amended approval.

“It’s awesome,” he said with a smile. “I’ve been working on this property since 2014 and, to see it open, I’m excited. I think it will be great to see it serve the community in a meaningful way. To see it go from vacant land to something as meaningful as a Panera Café, it’s great to see. It brings a lot of options to town.”

Solli said his three children are also excited about the new Panera.

A pin for Monroe 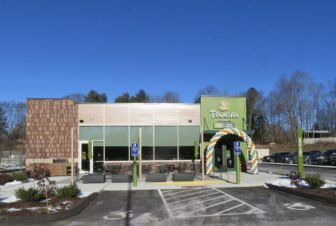 The new Panera Café is in Towne Line Plaza at 205 Monroe Turnpike in Monroe.

Kellogg helped Selleck cut the ribbon with a giant pair of scissors during a ceremony in front of the building.

“Thank you for coming to Monroe,” Kellogg said. “We wish you many years of success. We know this had a bump in the road with the pandemic, but we’re excited to have you here. We know you’re community oriented.”

The first selectman said he is happy to see Panera add a pin for Monroe, while marking its locations.

Giovanni said Panera brings healthy food options and good service to Monroe. “Thank you for being here,” he said. “We wish you the best of luck and we’ll be here daily.”

One thought on “The waiting is over! Panera Café celebrates grand opening of Monroe location”