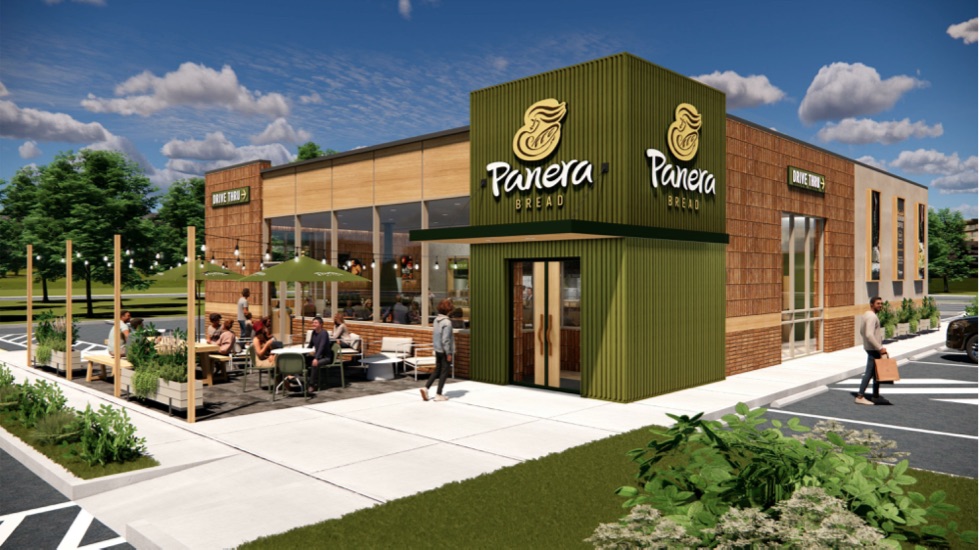 This computer rendering shows the next generation prototype for Panera Bread Cafés.

MONROE, CT — Panera Bread will build its first next generation café in St. Louis, Mo., and if everything falls into place, the second one will be built in Monroe, Conn.

Plans to build a 3,600-square-foot Panera Bread at Towne Line Plaza, at 205 Monroe Turnpike, stalled last year, when the national chain paused new construction amid the COVID-19 pandemic. But now there is a pending application to revise to previously approved plan.

On Tuesday night, Architectural Review Board members’ consensus was to recommend the changes, which will come before the Planning and Zoning Commission as an amendment to its approval.

Mike Schinella, a developer and the owner of the property, has been working with Panera’s corporate representatives over the past year to bring a restaurant to town.

“I’m going to contact them first thing in the morning and we’re going to go on to the next stage,” he said after the ARB deliberation Tuesday night. “I’m not promising, but I’m hoping we can have this open by Thanksgiving.” 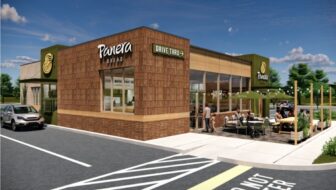 The Panera Bread would be built in Towne Line Plaza, which already has a Noble gas station and convenience store. The conceptual plan for the plaza also includes proposals for a medical and a retail building in the back of the site.

Schinella said he is currently talking to a Fortune 500 company that is expressing interest in being a tenant. Schinella said company representatives keep asking about the Panera Bread deal, so he believes having the restaurant built will go a long way toward luring quality businesses to the commercial center.

“It’s a beautiful looking building,” Schinella said. “It’s got a beautiful patio. It has quality, state-of-the-art materials. It’s going enrich, not only this site, but other sites in town. It’s a great use. We have two of them in Fairfield and we’re there all the time. It’s a good, quality retailer.” 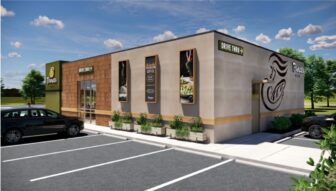 Mary Blackburn, a landscape architect with Solli Engineering in Monroe, made a presentation for modifications to the building, which will include a patio and a drive-thru window.

She said the building has roughly the same size and layout as the approved plan. “The newly proposed floor plan still has that outdoor patio dining in the front with the main entrance,” Blackburn said.

She presented plans for a building with brick panels on the sides and a green fiberglass-reinforced panel at the front entrance. Blackburn said the signage would be revised to comply with town regulations.

“One of the nice things they’ve done is include these panels,” Blackburn said. “It helps to break up the facade here. They have this mural in the back. It helps break up the solid color in the back.”

Take it, or leave it 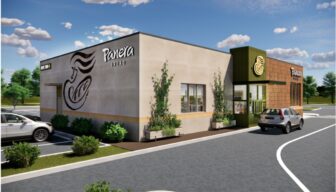 Cathleen Lindstrom, an ARB member, said she looked at different Panera Bread buildings on the internet and, though there is a certain element that is boxy, all seemed unique.

Blackburn said Panera has its branded colors and the designs of the buildings often depended on whether it was a new construction or the outfitting of an existing building.

Since Panera paused new construction when the pandemic hit last year, Schinella said the company spent a full year coming up with the new generation prototype.

He said Panera plans to redesign all of its existing stand-alone buildings to the next generation prototype, and to relocate all locations in shopping centers to standalone buildings in that design.

Before going any further, Schinella said Panera executives told him they want to see how the town is going to react, and if Monroe does not like this model, Panera’s next step will be to pursue a location in Shelton instead.

Schinella said retailers have the leverage.

“We don’t have room for changes. What you see, is what you have here,” he said. “If you get Panera, I think it’s a great thing for Monroe. I’m just trying to explain to you what we’re up against here.”

Lindstrom noted how the ARB spent a lot of time coordinating colors on the original application, so there would be consistency among the four buildings the plaza will have when it is complete.

“Is this going to coordinate with them? Stick out like a sore thumb?” she asked.

Schinella said he will try to pick up some of the colors from the Panera Bread for the two buildings in the back, so there is some conformity. “I agree with that and I believe in that,” he said.

“It comes down to a take it or a leave it,” Lindstrom said. “That’s what it sounds like.”

“I guess I’m going to take it with reservations,” Lindstrom said.

“I agree with Cathy,” said Deandra Lyn Musial, an ARB member. “I have reservations about the signage.”

But on a positive note, Lindstrom said she likes the side panels and the mural as elements that break things up. 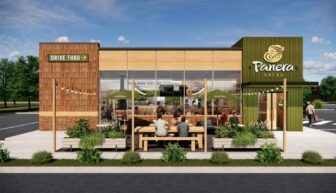