MONROE, CT — A revised House District map for the Connecticut General Assembly will change the makeup of the 12th District, which currently includes the town of Monroe and a portion of Newtown.

“The 112th District, which I’m proud to represent, has changed a bit,” State Rep. Tony Scott, R-112th, said in a statement. “It now includes a portion of Trumbull and Easton, but Newtown will no longer be included in the district.” 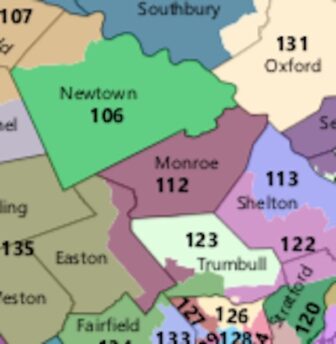 The new legislative district map shows the 112th District covering Monroe, about a third of Easton and a portion of Trumbull.

“I will continue to serve the needs of constituents in Newtown until January 2023,” Scott said. “While I wish Newtown would continue to be in the district for the next decade, this is, unfortunately, a required change. But I am confident that they will be equally represented in their new 106th District.”

Scott is in the midst of his first term after winning a special election in April, following longtime state representative J.P. Sredzinski’s sudden resignation.

In recent days, the Bipartisan Reapportionment Committee released the updated legislative district maps, which are based off the 2020 Census and will be in effect for the next 10 years beginning with the 2022 election.

Redistricting is a necessary and vital constitutional process to ensure equal representation based upon the results of the most recent Census. It is required by federal and state law and was implemented through a bipartisan process that reconfigured the districts through a process of compromise and cooperation.

“My constituents in Monroe can count on me being there for them, to listen to their concerns and address issues that arise within the district until the end of the term in 2023,” Scott said. “I look forward to meeting the people of Easton and Trumbull.”

For more information about the changes to the map, click here.