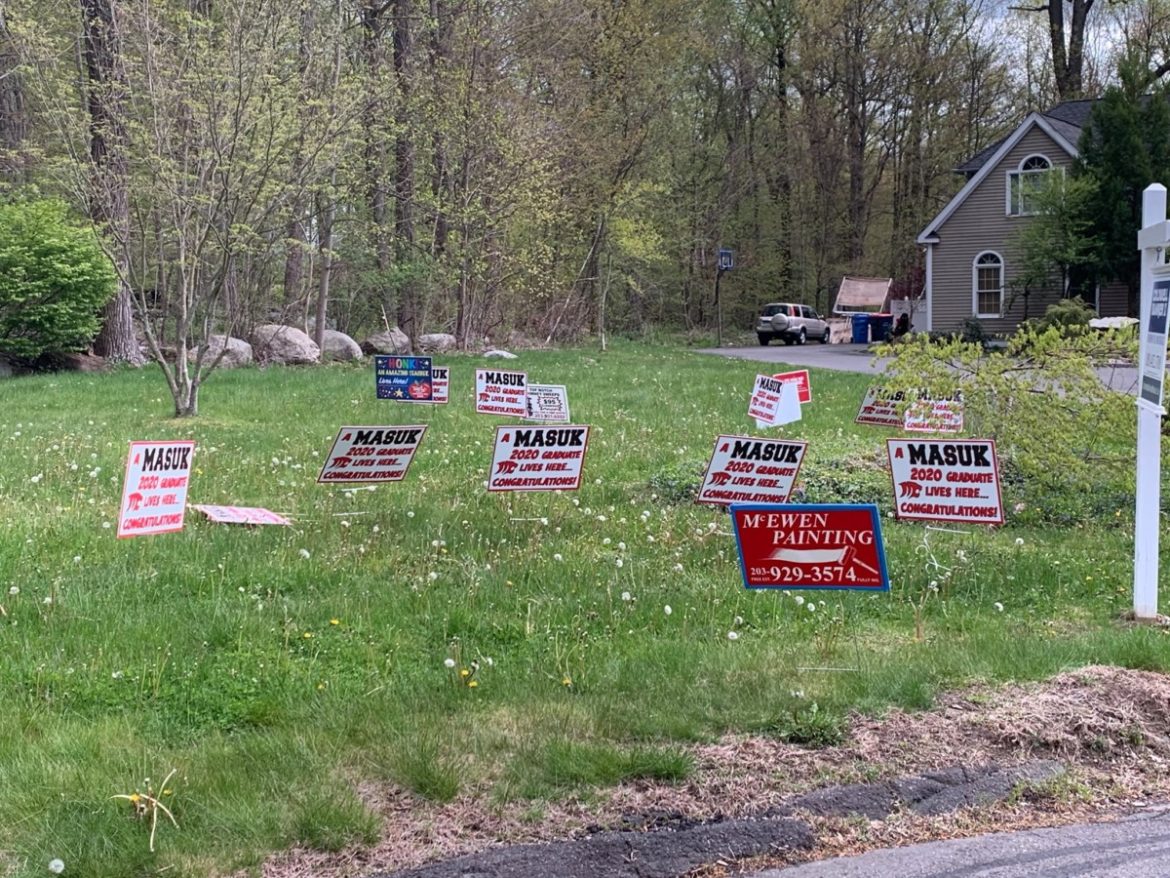 Several signs stolen from the front yards of homes of Masuk High School's Class of 2020 were left on a property on Sweetbrier Lane. Contributed

MONROE, CT — Parades lifted the spirits of Masuk High School’s senior class Saturday, at a time when the Covid-19 pandemic threatens to take away their prom and in-person graduation ceremony.

However, the theft of several signs the Masuk Parent Teacher Club bought and delivered to seniors along parade routes sullied the mood for some families following the event. Among them was Amy Primorac, whose son’s sign was taken from the front yard of their Cross Hill Road home.

“It was just really disheartening for all of these seniors to wake up and find their signs gone when they’ve already lost so much: Prom, Post Prom, Fashion Show, spring sports, basketball championship game, Senior trip … the list goes on and on,” she said Tuesday. “It’s probably a prank, but it is a cruel time to pull something like that.”

Primorac said at least seven signs were stolen, adding she has seen Facebook posts from families on Wheeler Road and Elm Street. Police said several of the signs were since found on a property on Sweetbrier Lane.

Parents spoke to Brooke Larsen, Masuk’s school resource officer, about the thefts and police said she will write up an official report on the incident.

“Saturday was such an amazing day celebrating the Class of 2020,” said Julie Frost, whose daughter is a Masuk senior. “These students have missed out on so much that we really tried our best to make it special. I feel like, as a community, we achieved that.”

“Yesterday we were shocked and saddened to hear that a handful of the signs were stolen,” Frost said. “It was very disappointing.”

Michetti said she, Frost and Co-President Fran Welch spoke about the incident with Masuk Principal Dr. Jacob Greenwood on Monday.

“We were on top of this matter from the second we heard the first sign went missing,” Michetti said. “It’s just a shame that this prank had to take place. It’s bad enough that our seniors have been robbed of so much already — and now to be robbed of their sign is just disgusting.”

“The PTC replaced our sign, which we are grateful for,” Primorac said.

Frost said volunteers had enough extra signs to replace the missing ones by Monday afternoon, adding, “and the outpouring of support from community members who reached out and offered to pay for new signs was truly incredible.”