The incident was reported by Save Our Stepney Task Force President Joel Leneker Wednesday morning. Police Capt. Keith White said police are investigating the crime, in which two flags were taken down and the lines were cut for two other flags that were torn from poles. 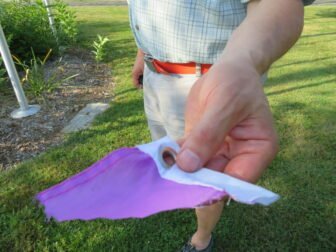 Joel Leneker, president of the Save Our Stepney Task Force, holds a piece of a Rainbow Flag that was torn from a flagpole, when a Pride Flag display was vandalized on Stepney Green.

“This level of vandalism on town property is unacceptable, and the message that this sends to our LGBT residents is intolerable and it goes directly against our values as residents of Monroe,” Scott said Thursday. “I am confident that Capt. White and the Monroe Police Department will conduct a thorough investigation into this matter.”

Police encourage anyone with information on the incident to call the Monroe Police Department at 203-261-3622.