A school bus driver traveled along Monroe Turnpike (Route 111) Tuesday, Oct. 15, when a deer ran into the roadway near Kettle Creek Lane and into the side of the bus.

Police said the deer appeared injured and went down in the street, before recovering and fleeing back into the tree line before an officer’s arrival.

No damages were reported to the vehicle. The incident occurred around 7:17 a.m.

Other deer and vehicle collisions were reported in the 70-block of Main Street Saturday, Oct. 12; and on Moose Hill Road, near Cross Hill Road, on Monday, Oct. 14.

The deer in the crash on Main Street was killed and the deer on Moose Hill Road ran off, heading east toward St. John’s Cemetery.

A woman driving on Pastors Walk, near Main Street, on Tuesday, Oct. 15, reported seeing a dead deer, which had been hit by a vehicle, laying alongside the roadway. Police said no driver reported damages or hitting the animal.

On Monday, Oct. 14, a Bridle Trail woman reported finding a dead deer floating in a pond adjacent to her property around 11:16 a.m. Officers removed the animal’s remains from the water and took it to the wildlife feeding site.

Based upon the state of decomposition of the animal’s remains, Animal Control Officer Ed Risko said the cause and time of death were undetermined.

In all cases where the deer died, a State Deer Kill Incident report form was completed. 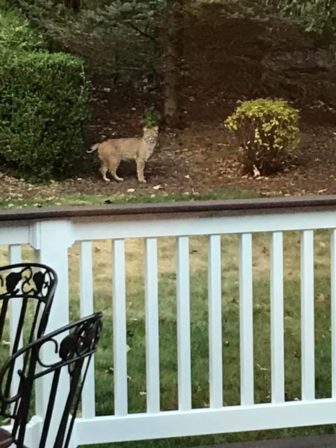 This bobcat was photographed on Hubbell Drive. Contributed

Bobcat sightings were reported on Fan Hill Road, Hubbell Drive, Windgate Circle and Easton Road within the past week.

Sighting report forms were completed and species fact sheets with common cautions provided to the callers. The reports were forwarded to the Connecticut Department of Energy and Environmental Protection’s Bobcat project.

A Pastors Walk woman reported finding a shivering red fox laying against the foundation of her house on Tuesday, Oct. 15.

Police said officers responding to the 8:13 a.m. call searched the area and were unable to locate the fox. A periodic patrol was conducted throughout the day with negative results.

On Wednesday, Oct. 16, a woman driving in the 300-block Guinea Road reported seeing a sick or injured red fox walking in the roadway. The incident occurred around 10:51 a.m.

Officers searched the area and were unable to locate the animal and also came up empty after conducting periodic patrols throughout the day.

A Barn Hill Road woman reported seeing three river otters running through the stream and playing behind her house on Friday, Oct. 11, and she shared video of it on Facebook.

The video can be seen on Monroe Animal Control Officer Ed Risko’s Facebook page in a post on Oct. 11.

Risko said a sighting report form was completed and a species fact sheet was provided to the resident, whose property is near Blue Spruce Lane.

Police said the culverts were cleared and opened by Monroe Department of Public Works.

A caller reported seeing a raccoon that appeared sick and injured walking in the roadway in the 1300 block Monroe Turnpike Wednesday, Oct. 16.

An officer responding to the 7:11 a.m. call searched the area and was unable to find the animal and periodic patrols throughout the day also yielded negative results.

On Friday, Oct. 11, a woman driving on Pepper Street reported seeing a raccoon walking across the road around 12:33 p.m. The animal appeared to be sick or injured, while coming from the Rail Trail and heading towards Old Mine Lane, according to the report.

An officer searched the area and periodic patrols were conducted throughout the day, but the raccoon was not found.

Monroe Animal Control recommended not feeding or providing shelter to the animals, whose descriptions did not match missing pet reports.

In both cases, a referral was made to a private no kill rescue group.