House pets are easy to keep an eye on compared to their counterparts in the wild. Catch a glimpse of the goings on of all our animals with these recent reports from Monroe Animal Control:

A bobcat frequents the west side of town 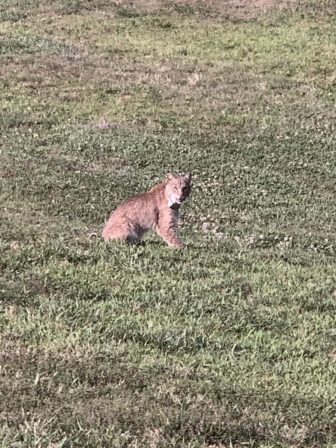 A bobcat relaxes on a field outside Chalk Hill School. Contributed

around noon on July 1. Police said it was limping and wearing a tracking collar.

The bobcat disappeared into the tree line without incident, according to the report.

Animal Control Officer Ed Risko said the female bobcat had been trapped and collared at the Benedict’s property this past winter. He said its home range is on the west side of town.

A Far Horizon Drive woman told police a neighbor’s fireworks caused her dog to have seizures on Independence Day.

Officers told the neighbor to tone down the noise.

A whitetail deer at his door

A Pinto Lane man told Monroe Animal Control a whitetail deer bedded down against the foundation of his house and would lay down in his garden during the day for about two weeks.

An officer saw nothing wrong with the deer, because it showed normal behavior by fleeing when approached.

Animal Control Officer Ed Risko said the deer could have laid down against the house because of the temperature or for cover that made it feel safe, adding it also could have been grieving the death of a fawn.

The deer was last seen on July 3 when a neighbor’s dog chased it out of the area.

A Fairfield woman asked animal control for information about guinea pigs, because her new pet was fighting with the old one.

The officer suggested she separate them for a 10 day quarantine, then introduce them in a room where they can find and become familiar with each other, before putting them in the same cage again.

Venomous snake in the hayfield

Monroe Animal Control responded to a report of a Trumbull man finding a dead copperhead snake in his hayfield on Kachele Street. 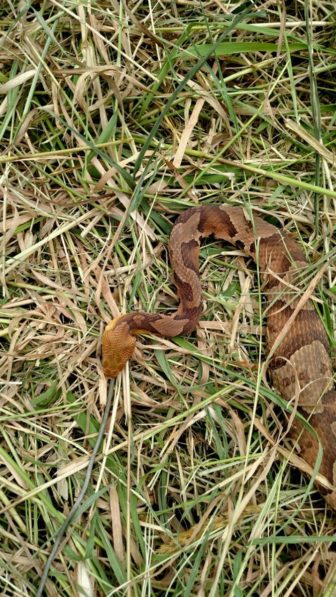 This dead copperhead snake was found in a hayfield in Trumbull. Contributed

Animal Control Officer Ed Risko said the venomous adult snake was 32 inches long and one to 1.5 inches wide. Photos and the specimen were provided for identification.

Risko said the copperhead, which has a distinct hourglass pattern of brownish orange on a copper-brown background, is commonly confused with the Eastern Milksnake, the Northern Watersnake and the Eastern Hog-nosed Snake.

Bird mites inside her house

An exterminator suggested that a Jockey Hollow Road woman, who reported seeing bird mites in her house, take down the bird nests against her home. But during the removal, she found fledglings, still alive in one of the nests.

On July 3, a Monroe Animal Control officer told her to return the nest to the site and suggested she wait until the baby birds move out of their home, before removing it, then to screen the area and put up exclusion material to prevent re-nesting next season. 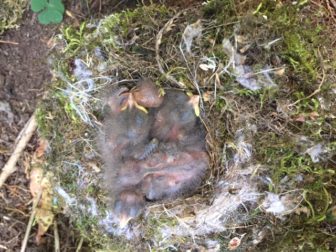 These fledglings were found in a nest on Jockey Hollow Road. Contributed

Bird mites live on the skin of a wide variety of birds, but especially chickens, according to Animal Control Officer Ed Risko. He said they become structural pests when they migrate from bird nests into buildings and attack humans. “For this reason, bird mite control is essential for property owners,” Risko added.

A Fox on the prowl

A Purdy Hill Road woman reported seeing a fox run out of the tree line, cross her yard to the street and run back to the tree line several times on the morning of July 3.

An officer checked the area, but was not able to find the animal. Animal Control Officer Ed Risko said the fox displayed normal behavior.

“I think it was hunting,” he said.

A sighting activity report was filed and the woman was given a verbal warning for failing to license her dog, according to the report.

A female motorist helped to reunite a stray dog with its owner in Trumbull on June 29.

Police said the Shelton woman found and captured the roaming dog on Route 110, near Wheeler Road in Monroe, then brought the uninjured dog to VCA Shoreline, an emergency veterinary facility in Shelton.

Shoreline reported the missing dog and its owner recovered the pet.

A Cottage Street woman told police her neighbor’s stray chickens were roaming in her yard on June 29.

The owner recovered his chickens without incident and no damage was reported.