Bill Field posted a photo of the owners of Home Plate Deli preparing sandwiches on the Monroe, CT Residents Facebook page with the message: “None better than Home Plate Deli. Curt and Bobby have built a business to last. Fabulous food and always great conversations. These guys work it day in and day out and the quality shows. Great to see success coming to people that earn it. #doyourbusinessinmonroe.”

These are just two examples of the Monroe, CT Residents‘ #doyourbusinessinMonroe campaign, which started in November and is running through Jan. 1. Barbara Fahr, one of the page’s administrators, came up with the idea to keep attention on shopping local beyond Small Business Saturday.

“It was a flash of an idea I had,” she recalled Monday. “I threw it out to the admin team for the Facebook page and it’s taken off very well. There have been 160 total entries so far, and that has come from 92 unique people and 92 unique businesses.” 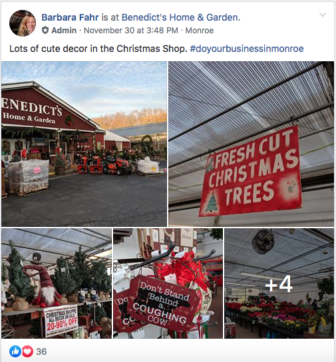 Entries can include a Monroe business, restaurant or town department.

Fahr said she had gift certificates sitting in a drawer at home and decided to use them for a good cause. Every Wednesday night at 9 p.m., there is a drawing among the week’s entries and the winner gets a gift certificate to a Monroe business.

Fahr said she hopes more local businesses donate gift certificates to be awarded to participants who post a photo or video of a business or product they bought in town, say where they got it and include the hashtag.

Jensen Tire, & Auto Marine and GlenRo Spirit Shoppe both volunteered to sponsor each entry by making a five dollar donation to the Monroe Food Pantry with a cap of $500.

“Originally, it didn’t have the donation to the food pantry, just the weekly drawing for town gift certificates,” Fahr said. “Then Eddie Jensen reached out to me and said, ‘this is great. I will basically sponsor every entry to the contest up to a $500 cap.’ We reached it faster than I thought.”

Then Fahr approached Larry Cass of GlenRo Spirit Shoppe to pick up the torch and he readily agreed. He has already pledged to make a $300 donation with more entries coming in. 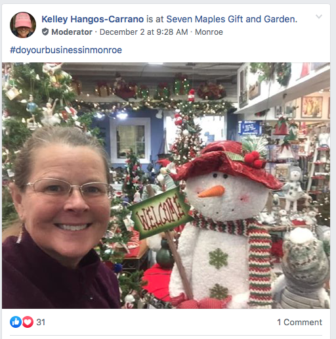 Fahr said she hopes another generous business will takeover the sponsorships once Glen Ro reaches $500.

Whenever someone submits and entry, Fahr writes: “Thank you for your participation in our #doyourbusinessinmonroe contest. Your entry post has been entered for the week 3 drawing. NOTE: a $5 donation to the Food Pantry by GlenRo Spirit Shoppe has also been credited for your post.”

Visitors to the Monroe, CT Residents Facebook page can track the donations on a Google Docs sheet.

Fahr said Mary Ann Kalm, the town’s social services coordinator, was extremely grateful when she mentioned the Monroe Food Pantry donations to her.

Among the businesses that have appeared on multiple entries was Benedict’s Home & Garden on Purdy Hill Road.

“I think it’s wonderful,” Bruce Benedict said of the campaign to encourage residents to patronize Monroe businesses. “It’s a great thing that local people are involved enough and engaged to see how important local businesses are to the community.” 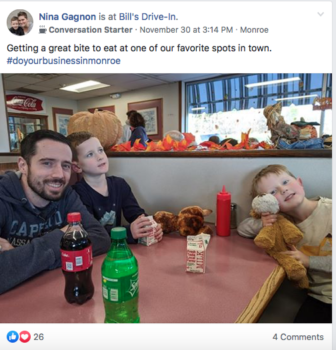 The employees of CardSmart, a store that sells cards and stationary in the Elm Street Shopping Center on Monroe Turnpike, have heard a buzz about the Facebook campaign from their customers.

“I love it,” Barbara Greene said, while working at the counter Tuesday afternoon. “A lot of people don’t want to go too far and they don’t like going to malls — and we have a lot to offer here.”

“I know almost everybody who walks into the store,” she said with a smile. “This is a place where people meet each other. We have a lot of fun here.”

Melissa Marti-Signor, who owns Lakeside Nutrition at Clock Tower Square on Main Street with Maria Small, said the Facebook campaign has been driving business to their store, which only opened about two months ago. 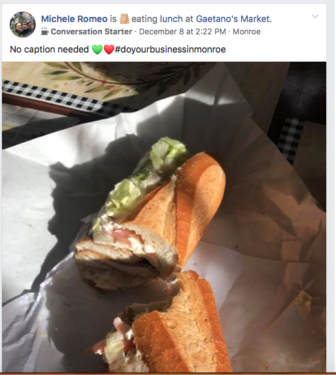 “I think it’s wonderful that everyone is supporting each other, supporting their hometown businesses,” Marti-Signor said. “We just had a customer five minutes ago, who said, ‘my friends keep posting on the Monroe page and I said, I have to go check it out.'”

Aside from the Facebook campaign, Marti-Signor said an added benefit has been high school athletes who frequent the health and nutrition business, who have been talking about it with their friends on social media.

During the campaign, Fahr said she was surprised by how many Facebook comments she saw under posts from people who did not know a business was in town. For example, she said some did not know about L&R Power Equipment at 122 Main St.

“The goal for this contest was just awareness,” she said. “Education and awareness of what we have here in Monroe, that was my goal when I started it and it blossomed from there.” 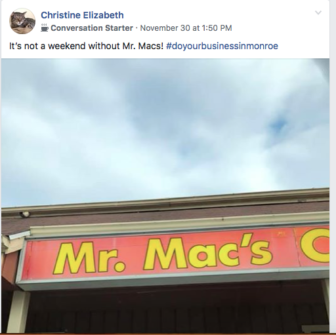 Fahr said most of the entries have promoted restaurants and retail establishments, adding she hopes to see more posts recognizing a wider variety of businesses, such as medical practices, attorneys, handymen or a chimney sweep, for example.

“I’m just so happy it’s been positively received by a large number of residents,” Fahr said of the campaign. “This is a resident-driven contest. This isn’t the chamber or the EDC. This is our Facebook page. I’ve been pleasantly surprised at how effective this grassroots campaign has been.”

Any businesses wishing to make a donation to the Monroe Food Pantry based upon #doyourbusinessinmonroe entries or to donate a gift certificate for participants to win should contact Barbara Fahr on the Monroe, CT Residents Facebook page.