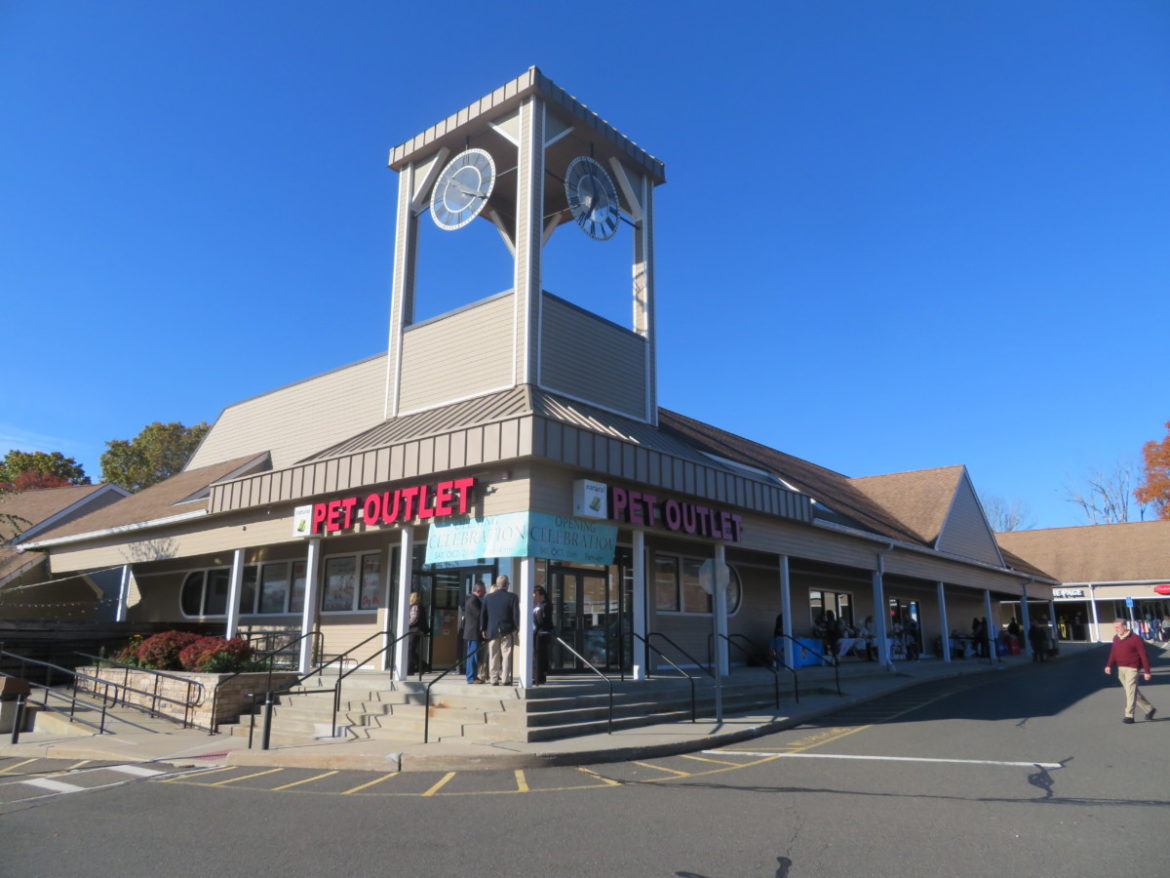 Clock Tower Square had several empty storefronts at one time, but its retail spaces are filling up. Among the newest stores are The Natural Pet Outlet and Lakeside Nutrition.

Lakeside Nutrition smoothie and energy bar and The Natural Pet Outlet are two of the newest businesses filling up Clock Tower Square on Main Street, supporting healthy lifestyles for locals and their pets.

Isabel Tartaglia, whose family owns the shopping center, touted the quality of her new tenants, especially how the stores are individually, rather than corporately, owned.

“I think one of the advantages are they care about their product,” she said. “It’s their passion. They’re part of the community. I think the owners of their own businesses are very creative and meticulous about what they serve and how they serve it. They’re about developing relationships.” 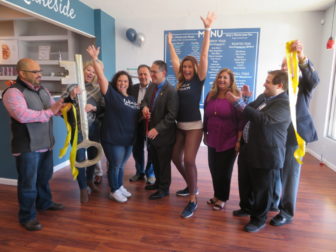 First Selectman Ken Kellogg, center, holding the oversized scissors, did the honors in cutting the ribbon during a ceremony celebrating the opening of Lakeside Nutrition at Clock Tower Square on Main Street Saturday.

“I was in corporate finance for 10 years,” Small said. “I have three young boys and decided to be my own boss and help others. That’s what was pulling me out of corporate.”

Customers of Lakeside Nutrition in Monroe will mostly see Marti-Signor, who is a nurse. Small said it is Marti-Signor’s first store as part-owner.

“She’s one of the most compassionate, caring people,” Small said. 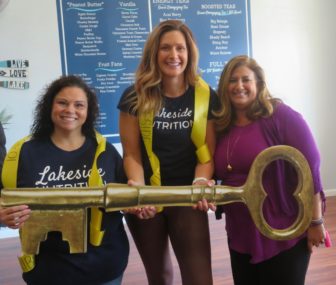 “We also have kids’ shakes and teas and a whole sports line of enhancers, such as Immunity Boost,” Small said.

Of Lakeside Nutrition’s customers, Small said, “they come here to destress. They leave here happier than when they come in.”

“The community is already asking about Sunday,” Small said, “and we’ve been open a week.” 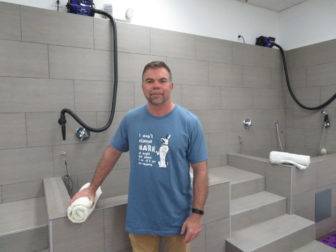 Ray Arabia, owner of The Natural Pet Outlet, stands by one of the bathing area for customers to wash their dogs at his store in Clock Tower Square on Main Street in Monroe.

Venders had tables on the sidewalk outside The Natural Pet Outlet, as well as in the parking lot. Inside, a deejay announced free 5×7 pet photos sponsored by Champion Pet Foods and a pet costume contest sponsored by Northwest Naturals. Nature’s Variety sponsored a dog ice cream eating contest.

Trick or Treating was a contest in which the best pet trick won a $100 gift card The Natural Pet Outlet stores. That was sponsored by Merrick.

From 10 a.m. until noon, a Money Machine awarded between $50 and $500 in drawings every 15 minutes. This was sponsored by Zignature.

There was also a Bravo Raw Food seminar and a NutriSource sponsored Yappy Hour at Carl Anthony’s patio with wine, beer, pizza and raffles for free baths for 10 winners.

A fenced-in area inside The Natural Pet Outlet has bath stations for customers to wash their dogs, with shampoo and towels. The owner, Ray Arabia, said a bath session costs $12.

The Natural Pet Outlet also offers nail clipping on Wednesdays from 3 to 7 p.m.

Arabia said The Natural Pet Outlet, which also has a location on Fairfield Avenue in Bridgeport, buys natural food and supplies from wholesalers and sells to chain pet stores and directly to customers at their own stores.

He said overstock sales with prices up to 80 percent off keeps people coming through his doors.

“We sell a lot of raw dog and cat foods,” Arabia said. “We’re also an outlet for dog toys and dog supplies.”

The Natural Pet Outlet’s Monroe store first opened on July 15. It is open Monday through Friday from 9 a.m. to 7 p.m. and from 9 a.m. to 6 p.m. on Saturday and Sunday.