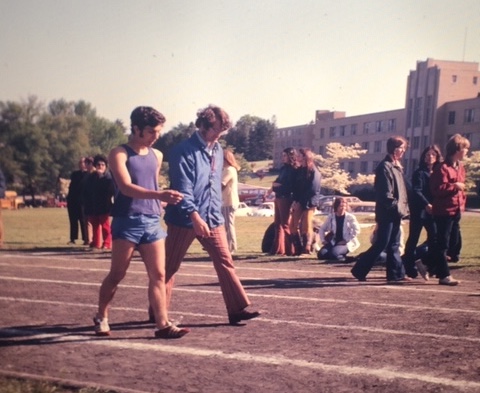 Maron Daher, a star sprinter on one of those teams, shared some photos, as well as a write up on the legendary Masuk coach, who also coached football during his career:

Coach Butler was our track coach during my junior and senior year, 1972 and 1973. The picture of the two of us was from the 1972 season. During this time Bunnell was a track powerhouse in the former MBIAC. 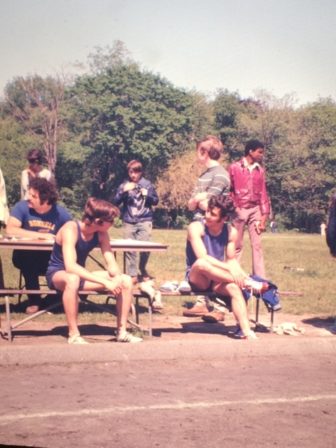 Norman Greenhouse, left, and Maron Daher at a meet in 1972.

We were three deep in every event with our competition only being cross-town rival Stratford and Fairfield Prep. In 1972 we were undefeated MBIAC champions and in 1973 our only loss was to Prep who was the regular season champion, however we won the most gold medals at the MBIAC championship meet. Coach Butler was the sprint coach and coached other running events.

Norman Greenhouse and I were two of the fastest sprinters in the County and broke the school 100 yard dash record several times. He and I were part of the foursome who won the 4-x-220 yard relay gold medal at the championship meet our senior year.

Norm remembers Coach Butler teaching us a special relay baton exchange that gave us an advantage over the other schools.

Coach Butler taught us running technique and was a good motivator. He was also very well liked by the team. We were a raucous bunch and he had enjoyed our company. The fact that we dominated the competition made it a good time for all of us. 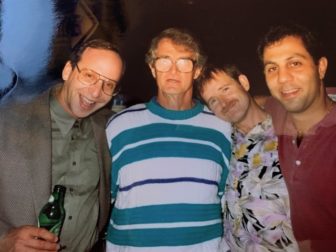 Coach Butler also attended my bachelor party in 1993 and I have attached a picture. From left to right are Norman Greenhouse, Coach Butler, Ed Drew, and myself; all gold medal winners.

I heard he retired, so we wish him well and I hope this short recollection brings back some good memories for him.