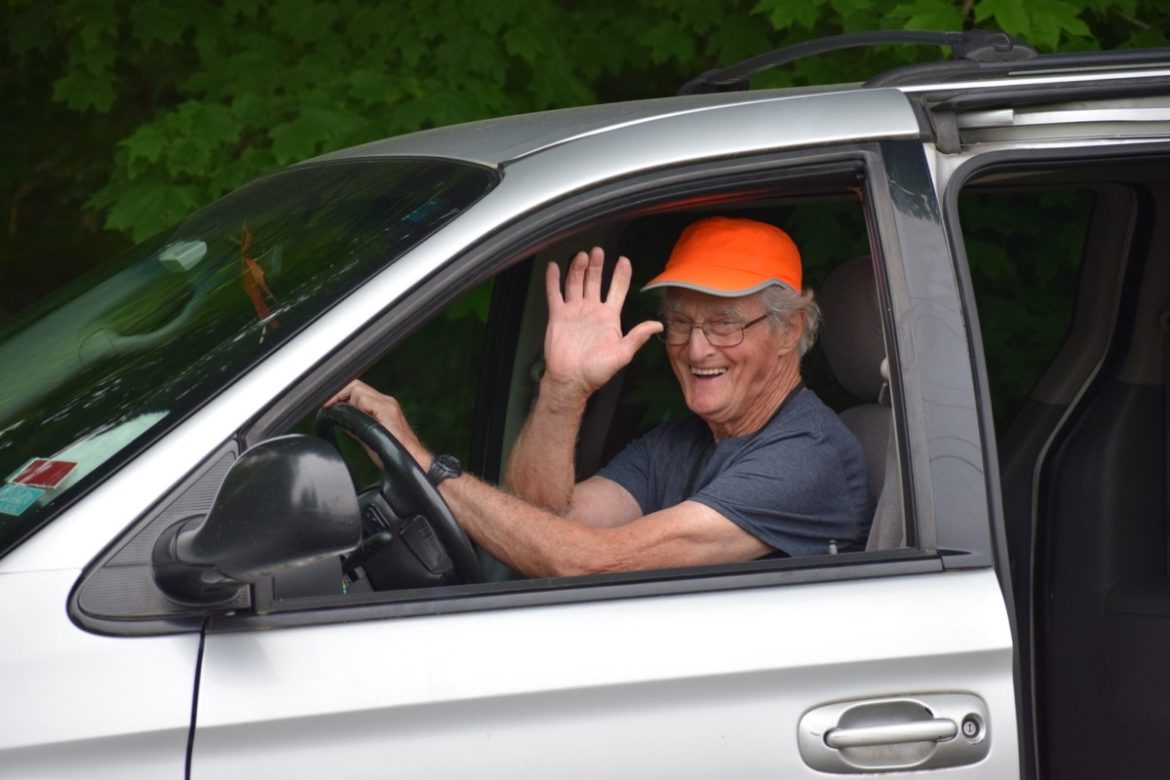 Ed Butler’s coaching career began at Bunnell High School when he led the cross country team in 1972. Now 47 years later, Butler is a retired Masuk High School art teacher, who still pulls on his sneakers to coach girls track and boys and girls indoor track at the age of 85.

This year, Butler will be inducted into the Connecticut High School Coaches Association Hall of Fame. On Sept. 7, he was among nine future inductees honored at halftime of the UConn football game against Illinois at Rentschler Field in East Hartford.

“It’s still fairly surreal,” Butler said. “When they called my name I heard several UConn kids in the stands cheering, so some were my former athletes.”

On Nov. 21, Butler will officially be inducted into the Hall of Fame at a dinner and ceremony at the Aqua Turf in Southington.

He is the third Masuk coach to be inducted into the Hall of Fame, joining former baseball coach John Giampaolo and former girls basketball coach David Strong.

“It’s a humbling process when you think of all the people who have gone before you and achieved this honor,” Butler said. “I’m just very grateful.”

Strong nominated him for the honor and Butler credits him with helping to fill out the application. “He sat down with me last spring,” Butler said. “Dave is just a wonderful guy. He has always been very supportive of all the coaches, but always extra supportive of me when I needed help.”

“Ed is one of three coaches that have been the heart and soul of Masuk athletics over the years,” Strong said. “Ed, Johnny G. and Carl Bodnar.

“The longevity is impressive,” Strong added of Butler’s career. “There aren’t too many people still coaching in their 80s. The number one thing for me is caring for the athletes he coaches. It’s just so impressive how he cares about all of the kids, regardless of ability. The least athlete in track can be encouraged to do better than they did before, and Ed is a master for bringing out self esteem in a young athlete.”

Butler was also honored two years ago, when the Masuk High School track was named after him. The dedication came with a plaque set in stone. 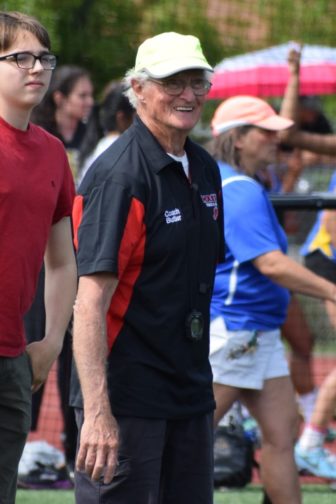 Butler grew up in Stratford, where he ran track and played football at Stratford High School. “I played a little football a couple years at West Virginia,” he said of Wesleyan college.

Butler played guard and linebacker in high school and running back and defensive back in college.

At Wesleyan he majored in art and English, but before becoming a teacher, Butler was drafted and served in the U.S. Army Corps of Engineers from 1956 to 1958.

Then he went back to college and earned a Master’s degree in teaching and landed a job at a middle school in Meriden, before applying and getting a job at Wooster Middle School in Stratford two years later.

Butler went on to teach at Bunnell High School, where he started out as an assistant boys track coach, eventually being promoted to head varsity coach.

“Bunnell didn’t have girls sports and I had a couple girls on my track team,” Butler said, adding of coaching when the first girls teams were formed, “it was cool to be part of that whole transformative process. Frankly, it took quite a while for some coaches to accept girls as athletes.”

“It’s a wonderful time to be involved, because it’s so positive and important to a major segment of our population,” he said.

Butler met his wife, Christine, in Farmington when he was in the play, “Guys and Dolls” and she was a prompter. “I was Harry the Horse,” Butler recalled. “It was a musical.”

“I’m very proud of Ed for receiving this honor,” Christine said of the Hall of Fame.

The couple has daughters, Susan, Johanna and Lisa, as well as three grandsons. 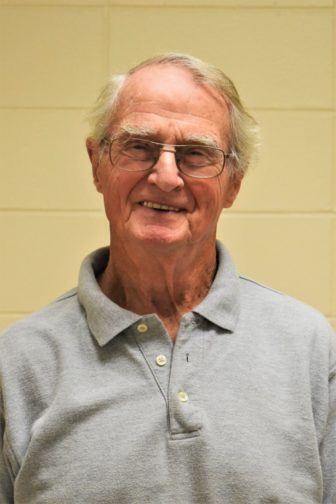 Butler has coached cross country, freshmen and varsity football, as well as indoor and outdoor track. His varsity head coaching record, not counting sports with multi-team meets, is 453 wins and 241 losses with one tie, for a 65.3 winning percentage.

Butler has earned individual accolades over the years and his teams won a total of 14 league championships.

Butler is not well known for football, but he coached Masuk’s varsity team to a 30-8 record over four years, winning league championships in 1979 and 1982.

“Eddie, he coached in one of the greatest high school football games you’re gonna see,” Giampaolo said of the 1982 team led by Rick Comizio, who was All-State, quarterback Keith Webster and running back and kicker Bobby Terry.

In a league championship game decided in overtime, Giampaolo remembers Butler calling for a fake field goal. Webster was the holder, but after taking the long snap from center, he kept the ball and ran, diving in for the winning score, according to Giampaolo.

“Eddie is a lifer,” Giampaolo said. “He’s one of a kind. He’s still at it. He loves the kids. It will be nice to see him honored. It’s a well deserved honor. He put in a lot of hours and helped a lot of kids.”

Nick Banks, an English teacher and outdoor track coach at Trumbull High School, is a graduate of Masuk’s Class of 1990. Butler was his indoor track coach for all four years.

Banks’ father was Masuk’s boys outdoor track coach when Butler coached the girls team and Banks later became the boys coach. Butler outlasted both of them.

“We collaborated and would run meets together,” Banks said. “We traveled to state competitions and SWC Championships. It was great getting to know him, not only as an athlete but as another coach, and to draw on his years of experience to help with the boys program. If I had any questions, he was always a big treasurer trove of information.”

The magic of high school

Butler said sports teaches young athletes time management, especially in indoor track, where there is no designated space for a team. Athletes sit in the stands and have to know when and where their event is, and when to start warming up.

He said one of the biggest lessons track and field athletes learn is someone’s always better than you. “They have to learn to process defeat and some people can’t handle it,” Butler said.

He said all athletes can focus on beating their personal bests. “That’s the great thing about sports, the growth and self-assurance,” Butler said.

Butler said being around the energy and excitement of the kids is what’s kept him coaching for so long.

“The magic of high school is you watch the kids come in as ninth graders and evolve through the years as adults,” he said. “They don’t just grow physically, it’s mentally and emotionally. That’s what the payoff is. It’s seeing this metamorphosis.”

Hear from the athletes

The following is a collection of memories shared by some of the high school athletes who played for Butler over the years.

“No matter where you came in, he said, ‘way to go. Great race.’ He was never a downer,” Skudlarek said. “If I could sprint at the end of a long distance race, he would say I could have spent more energy during the race. He was right, but I didn’t wan’t to die during the race,” she added with a laugh.

“He sits at the corner of Greenlawn and Purdy Hill road every year and cheers the runners on,” Skudlarek said. “He’s a fixture. He’s a nice guy. He has a cooky smile that makes other people smile.”

“Ed Butler is the type of coach that makes you want to come to practice every day,” Saia said. “He is such a force of positive energy and is always pushing everyone to better themselves every day.”

“He is also a role model with the life he leads, whether it is calling home to his wife on the bus ride after a meet and yelling out ‘she still loves me’ or bringing a funny joke to practice,” Saia said. “He shows everyone how to always be grateful, positive and laugh!”

Katie Duffy ran indoor and outdoor track with her twin sister, Annie, from the winter of 2000 to 2003. Robyn and Dawn Hudak were also twins and Butler ran the four of them in the 4 x 800 relay. 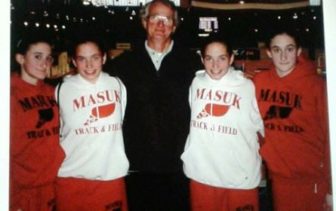 “He thought we would confuse the coaches and other runners into thinking only two girls were running, not four,” Duffy recalled. “If we had a rough race, he would give us a hug and make us laugh. He is the most sincere and dedicated coach anyone could want.”

Meg Tynan ran indoor and outdoor track from 2010-2014. She said Butler made the team into a family, while helping young athletes excel at running.

Tynan set school records in multiple events, winning the Class L state meet in the 100 meter race in 2014. She said that would not have been possible without Butler’s coaching.

“Our relay team was very close and some of my favorite memories are of driving up to Maine or Boston in Butler’s old minivan,” Tynan said. “He was always incredibly supportive and I never would’ve been able to run in college if it wasn’t for him.”

One of Tynan’s fondest memories of Butler was after a disappointing meet.

“My senior year I did not do well at the SWC Conference meet,” she said. “I had had an off day and performed way worse than I was expected to. The next day, Coach Butler showed up at school and gave me a red rose and a card with Wonder Woman on it. He wrote in it how proud of me he was. He loves every one of his athletes and truly cares about them and that is what makes him such an amazing coach!”

Danielle Robinson Briand ran indoor and outdoor track from the winter of 1994 through the spring of 1997. The sprinter went on to run varsity track at Yale.

“Mr. Butler is one of the most unique individuals I have ever met,” Briand said. “He is kind, generous, creative, inspirational and dedicated. He has a special gift for connecting to young people through art and sports. I remember how genuinely invested he was in helping me and my teammates push beyond our own boundaries and achieve personal aspirations.”

“I carry a deep debt of gratitude to Coach Butler for being an early mentor for me, for instilling in me the value of working hard, as well as helping me learn how to let go of disappointments when races didn’t go my way,” Briand said. “Thanks to his coaching, I was indoor state champion in the long jump during my junior year (1996) and I was recruited to run at Yale, where I competed for several seasons.”

She added, “I was thrilled to find out that he was inducted to the Coaches Hall of Fame — generations of young people from Monroe have gained enormously from his brilliance and good nature!”