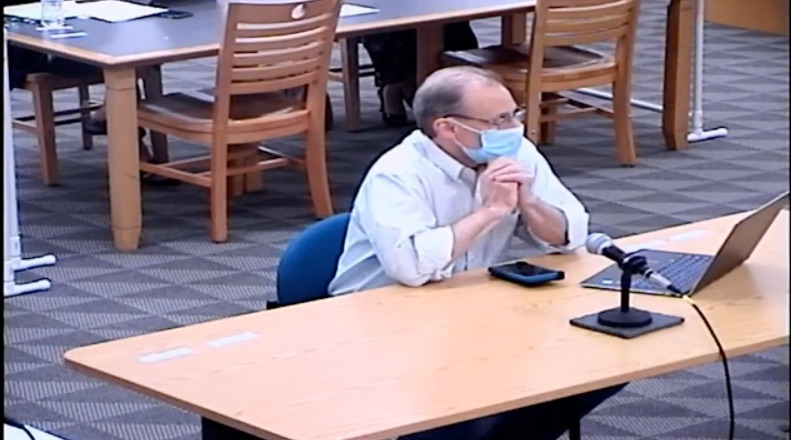 Robert Boshka, a parent, speaks during the Board of Education meeting at Masuk last week.

MONROE, CT — An investigation into budgetary issues ended with a separation agreement between former Superintendent of Schools Dr. Jack Zamary and the district last year, but the battle to release the report’s findings goes on.

The Board of Education investigation found any budgetary issues and problems preceded Zamary’s tenure, though no written findings were released to the public.

Robert and Vicki Boshka, parents of children in the district, filed a Freedom of Information Act complaint to compel the district to release any documents related to the investigation, along with performance evaluations, documentation of budgetary issues, settlements and legal bills.

Last year, The Monroe Sun filed a Freedom of Information request for investigator, Attorney David Ryan’s findings, but apparently there was no final report to obtain.

“Attorney Ryan’s report was in draft form and not completed, therefore, it is my understanding that under CT Supreme Court law no disclosure is required,” Board of Education Chairwoman Donna Lane responded.

That answer was not good enough for Vicki Boshka, who filed the FOI complaint against Lane and the Monroe Board of Education on Oct. 22, 2020 after she did not receive all of the information she requested in September of that year.

“I believe the documents that I requested do not meet the criteria for exemptions permitted for FOI requests and, therefore, the documents should be provided to me,” Boshka wrote.

In response to an FOI request on Sept. 16, 2020, Attorney Jeffrey M. Donofrio, who represents the Board of Education, agreed to release several documents to Boshka, but denied others as being too broad and “tantamount to a fishing expedition,” according to letters obtained by The Sun.

Any drafts related to the investigation were also denied, because Donofrio determined it was exempt from disclosure.

Though Boshka filed an FOI complaint in October, the Freedom of Information Commission has yet to schedule a hearing date.

Robert Boshka brought the FOI complaint up during the public comment session of the Board of Education meeting last Monday.

“The Board of Education has not produced a cogent reason not to release the report,” he said. “The first reason given was that it was in draft form. The next reason was the investigation was simply due to inadequate leadership and budget oversight by Dr. Zamary.”

But Boshka, who obtained copies of Zamary’s performance reviews, said there was neither mention of those issues nor anything about a performance improvement plan. “So this doesn’t appear to be the reason,” Boshka said.

On Monday, Boshka said he has since seen a performance improvement plan that he received from Attorney Donofrio.

He contended that taxpayers are entitled to see the report’s findings, because they funded the investigation.

“The Connecticut Freedom of Information Commission has communicated to me that it seems that the report should be considered a public record and released to the public,” Boshka said.

“An additional attorney firm has been hired to prevent the residents from obtaining the report, so a FOIA hearing will be scheduled to decide on this matter, because the Board of Education refuses to release it,” he added.