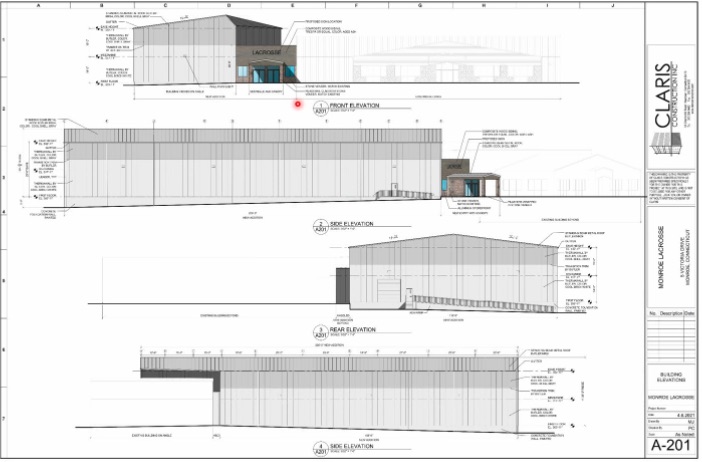 MONROE, CT — Olè Soccer’s proposal for a 22,340-square-foot expansion of its sports facility at 5 Victoria Drive to house an indoor lacrosse field with bleachers, a small mezzanine, locker rooms and bathrooms was well received by the Planning and Zoning Commission at a hearing Thursday night.

“I think this is a great addition to the town,” said Nicole Lupo, a commissioner. “I think lacrosse is very popular and adding any indoor facility, between the cold weather and the wet weather, is fantastic.”

Lupo asked about traffic flow, with parents picking up and dropping off their kids there.

Kevin Solli, the project engineer and principal engineer of Solli Engineering in Monroe, said there would be a decorated brick circle for a drop off area and there would be circulation around the buildings.

Solli also said there would be adequate parking with a total of 142 spaces in an area that could accommodate 151. This includes a gravel 23-space overflow parking lot behind the facility.

Some commissioners asked the developer to add a sidewalk from the overflow parking lot to the main parking lot to improve safety Three new light pole fixtures would match existing ones on the site, according to the plan.

Phil Clark, an architect with Claris Construction, designed the project, which the Newtown firm will also build. He said the indoor facility will be a box lacrosse field.

In a meeting before the Architectural Review Board, Clark said it’s like a hockey rink with artificial turf.

Solli said a professional lacrosse team that used to play at Mohegan Sun is affiliated with the owners and will play practice and play some tournament games in the Monroe facility. The team is now based in Albany, he said.

A Google search found the New England Black Wolves are the NLL franchise that played at Mohegan Sun Arena in Uncasville, before being sold and relocated to Albany.

Schultz told the commission the ARB will be drafting a positive letter of recommendation for the commission’s next meeting on May 20, when the zoning hearing will be continued.

The hearing was left open, because the project is also before the Inland Wetlands Commission due to its proximity to wetlands and the Pequonnock River.

Solli said a portion of the building would be within the flood plain. The applicants are working closely with Town Engineer Scott Schatzlein to address all of his concerns and will apply for flood plain permits, according to Solli.

The drainage plan would have stormwater detention basins and the site would have sedimentation controls. The septic capacity would be expanded. Solli said the applicants are working with the Health Department for that.

Solli said the site would also have an extensive landscaping plan. Fourteen trees from the existing parking lot would be transplanted with other landscaping, which would include new plantings of native trees and shrubs.

In his presentation to the ARB, Clark said Olè Soccer’s existing metal building is 12,000-square-feet with a stone veneer at the main entrance and horizontal, natural wood siding. Its colors are off-white and green.

He said the new metal Butler building will match the stone of the existing facility and the siding would be made with Trespa, a resin material resembling wood that is maintenance free.

Instead of being off-white and green like the existing building, because the new one is larger, Clark is proposing a two-tone color scheme that is off-white at the bottom and gray above, because he said gray would attract less attention than the green.

On Thursday, Solli told the Planning and Zoning Commission the existing building is not sprinklered, adding they will bring in a fire service to provide sprinklers for the building expansion.